The end of politics by proxy in Turkey 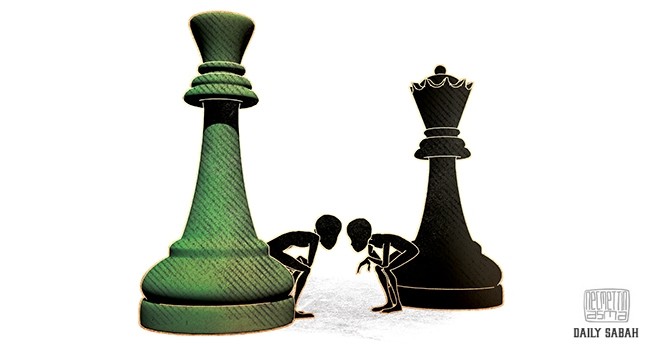 Illustration by Necmettin Asma - twitter.com/necmettinasma
by Fatmanur Altun Jun 10, 2016 12:00 am

Whether it is called a presidential system or the end of the non-partisan presidency, the country's quest for a new system of government promises to consolidate the democracy and reward politicians willing and able to fix Turkey's problems

Extraordinary developments have taken place in Turkish politics over the past year. In the June 2015 elections, the Peoples' Democratic Party (HDP) received 13 percent of the vote to reach the peak of its popularity by pledging on the campaign trail to become a national - not just Kurdish - movement. In the months leading up to the historic election, the HDP had become the tip of the spear in the opposition's campaign against a proposed transition to a presidential system. Reaching out to voters outside its traditional voter base, the party became the third-largest political party in Parliament.

HDP: BETWEEN LEGAL AND ILLEGAL

For the opposition, an added benefit of the HDP's success was the failure of the Justice and Development Party (AK Party) to protect its parliamentary majority after 13 years in power. Kemalists and neo-nationalists, traditionally hostile to Kurds, had thrown their weight behind the HDP and, consequently, dragged the Republican People's Party (CHP) closer to the Kurdish nationalist movement. Following the elections, HDP Co-Chair Selahattin Demirtaş famously told a CHP parliamentarian that "we will accomplish much more together." What had brought these enemies together was their mutual dislike of the AK Party and its founding leader, President Recep Tayyip Erdoğan, who, despite not running for office, was declared by national and international media outlets as the election's loser. The shift from the CHP to the HDP was so obvious that Sırrı Süreyya Önder, an HDP deputy and spokesman, had to acknowledge it in his first press conference after the vote count.

In the lead-up to the June 2015 elections, the AK Party underwent major changes as well. Erdoğan stepped down as prime minister and chairman after becoming Turkey's first directly elected president in August 2014. Following Erdoğan's departure, former Foreign Minister Ahmet Davutoğlu, who was handpicked as his successor, proceeded to assume the chairmanship and post as prime minister. In his first election at the helm, the former foreign minister witnessed a nine-point decline in the AK Party's popular support, which stood at 40.8 percent. According to pundits, the notable decline hinted at the electorate's doubts about Erdoğan's replacement.

With coalition talks ending in a deadlock, Turkey headed for snap elections on Nov. 1, 2015. Erdoğan's open support for the AK Party on the campaign trail paid off, as voters, many of whom claimed they were "voting for Tayyip," rallied behind the incumbents and helped the ruling party win another landslide victory.

The results of the November 2015 elections pitted the HDP, which had relied on anti- Erdoğan rhetoric to expand its base, and placed the AK Party back in power thanks to Erdoğan's assistance. To be clear, many HDP supporters expected the party to continue disarmament talks with the government and use political channels to promote peace. In response, HDP leaders like Demirtaş had told voters that only they "can persuade the PKK to lay down their arms." However, it soon became clear that the HDP would not be able to deliver. Seeking to reap the benefits of civil war in northern Syria, the PKK walked out of negotiations with Turkey and proceeded to step up violence. Meanwhile, the HDP leadership voiced support for PKK violence and effectively served as the organization's public relations team. Openly acknowledging their ties to the PKK, HDP Co-Chair Figen Yüksekdağ famously said: "We support the YPG [People's Protection Units], YPJ [Women's Protection Units] and PYD [Democratic Union Party]." With the PKK's return to violence, southeastern Turkey's spring of peace quickly turned to winter.

The group's return to violence and decision to unilaterally end the disarmament talks had major side effects on the HDP's popularity. Having failed to work for peace and dialogue, the party would fail to clear the 10 percent national threshold if a general election were held on Sunday, pollsters maintain. In other words, the PKK's return to violence has effectively doomed the HDP's outreach efforts to failure. Even anti-Erdoğan rhetoric no longer pays off for the party once credited for undermining the AK Party's grip on power.

Meanwhile, it remains unclear how once-disgruntled voters who Erdoğan brought back to the party in November 2015 will behave in the future. In recent months, many AK Party supporters who consider the president their actual champion had been disappointed by Davutoğlu's reluctance to create the legal basis for Turkey's de facto semi-presidential system of government. The opening salvo was fired when party executives, unhappy with the direction in which things were headed, moved to strip then AK Party chairman, Prime Minister Davutoğlu, of control over the management of local chapters. The AK Party establishment had taken matters into its own hands to remove the chairman, with whose policies they disagreed, from power, in a move that critics unfairly described as a civilian coup within the ruling party. The AK Party's parliamentary majority meant that the new chairman would replace Davutoğlu as prime minister as well, just like the outgoing chairman had succeeded Erdoğan less than two years before.

On May 22, 2016, the AK Party's second emergency convention met to elect Davutoğlu's successor as chairman and prime minister. In fact, the convention marked a historic step by the ruling party to complete the transformation of Turkey's system of government. Moving forward, the recently elected chairman and prime minister, Binali Yıldırım, and his colleagues will take necessary steps to create the legal basis for the elected president's role in government. Addressing the problem of dual legitimacy in the executive branch, the proposed constitutional amendments will make it possible for the president's supporters to vote for him directly instead of using political parties as proxies. Voters who would like another politician to replace the president, in turn, will be able to do just that. Whether it is called a presidential system or the end of the non-partisan presidency, the country's quest for a new system of government promises to consolidate the democracy and reward politicians willing and able to fix Turkey's problems. The highly anticipated transition will not only mark the death of politics by proxy, but also permanently prevent the guardianship regime from making a comeback.