Turks will decide the Brexit vote 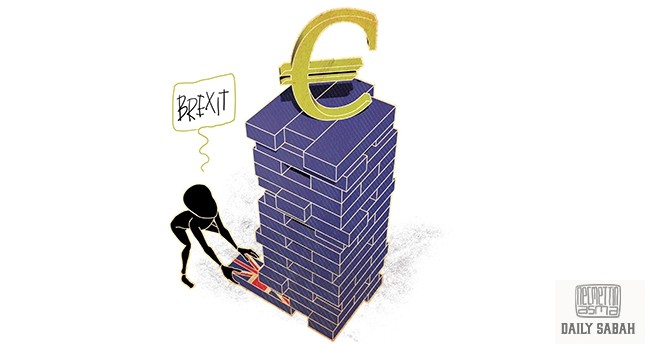 Only less than a week is left before the vote, and the Turkish threat propaganda persists, as there is hardly a day without one of the usual papers or politicians warning the public about the Huns

The murder of Labour Deputy Jo Cox by a man shouting: "Britain first," on Thursday may have revealed the power of the propaganda perpetrated by U.K. Independence Party (UKIP) leader Nigel Farage and his fellow Brexiteers. The news came as people were discussing the IN campaign poster that said: "Breaking Point," with a picture of refugees, and which has been likened to posters from the Nazi era. One big element of the Brexit campaign has been Turkey's accession to the EU. And as the Brexit vote draws closer, Turks, mostly unbeknownst to them, have found themselves in the middle of the debate about the U.K. leaving the EU. On social media and televised Q and A sessions with politicians, the reasons Leave campaigners give seem nebulous - they talk about taking back the U.K.'s sovereignty, about home rule and not being subjected to decisions taken in Brussels. This line argument reminds me of Slavoj Zizek's famous answer to the question: "Where do the Balkans begin?" He gives an explanation that ends with the line: "To some British opponents of the European Union, Continental Europe is a new version of the Turkish [Ottoman] Empire with Brussels as the new Istanbul - a voracious despotism threatening British freedom and sovereignty. (See London Review of Books, March 18, 1999) The Zizek piece was written when the Brexit was not even in the cards, and yet the enfant terrible of philosophy seems to have captured today's mood in the U.K. more than a decade ago, with the hatred for Brussels and Istanbul - sorry, Ankara -seamlessly conflated.

When pushed to name the one thing that will make them vote to leave, many Britons talk about border control and migration. One of these Leavers I talked to and who was afraid of uncontrolled immigration - I nodded my head, smiled and said, "yes, I understand" - was a nurse who supported the Junior Doctors Strike. Emboldened, I asked her which party she voted for and she answered: "I can't vote Tory." Which was nice and very working class of her in a way, but also troubling to see that there was such a thing as a Labour Leaver. She spoke in good faith, to the face of a person whose country has been the central bogeyman in the debate.

It was sort of funny to start off with, but the Turcophobia in the Brexit debate has reached ridiculous proportions. The vote-Leave-or-the-Saracens-are-coming propaganda gained momentum when in May, the Express newspaper, which has a knight with a St. George's shield in its logo, is not that far from the Hürriyet daily'a motto: "Turkey belongs to Turks," to be fair - ran the headline "12 million Turks say they'll come to the UK once EU deal is signed." Many journalists and politicians tried to respond to it in a way to control the damage this could do to the Remain campaign. To my mind, what was worse than the Express headline - I mean, what would you expect from a paper that has a tiny crusader figure as its symbol - was the way the Remainers tried to calm, or indeed, appease the Brexiteers after this "blow." Rather than say that Turks are well on their way to joining in the EU and we should look forward to the contribution of such a dynamic country, as you would expect liberals to do, the Remainers gave figures and guarantees about how Turkey would not enter the EU in the near future, along the lines of: Don't worry Briton, the barbarians are very far from the gates, we'll only be in a union with the nicer bits of the Continent. The one commentator who came close to acknowledging that Turkey in the EU would not be such a horrible thing was Owen Jones, whose rebuttal of the "12 million Turks" headline was first repeating the neigh impossibility of Turkey entering the EU in the next few decades, and then saying that he was proud of the contribution Turkish immigrants have made to the U.K.

One of the most often quoted interviews as the Turcophobia discourse grew stronger was that of former Prime Minister John Major, who again tried to assure the interviewer that Turkey would not be joining, thank you very much, that there was no question of 70 million Turks coming to the U.K. It went from some 12 million sad punters to a whole country of 70 million marching towards Europe. A few days later, the figure dropped again, this time to 1.5 million Turks, but the insinuation was darker, that there was a secret deal between diplomats and Turks to let in, and well, sorry, I have run out of words for "frightening strangers."Active in the debate is of course the inevitable former mayor of London, Boris Johnson, our man in Westminster, who decided to throw his lot in with the Leavers a few months ago. I still wonder at what point the Turkish state will activate the Manchurian candidate in him. But so far he has been the Leaver poster boy, without as much fear mongering about Turks as the rest of his co-campaigners. This may well be because of the fact that not so long ago he had penned an op-ed on why the EU should accept Turkey sooner rather than later, an op-ed written in the conservative Telegraph on Feb. 26 2007, and that naturally has had some airing on social media by the Remainers.

Of course it is not all about Turks. There is now talk of how, should Britain leave the EU, the next vote for Scottish independence may be successful, and we could live in a future where Scotland is in the EU, and England is its own truncated island. The Belfast Telegraph reports " 'Unprecedented' demand for Irish passports from British as polls indicate Brexit EU referendum result." The projections are so fantastical that one almost wishes for a Brexit. It is a brave new world.

Only less than a week is left before the vote, and the Turkish threat propaganda persists, as there is hardly a day without one of the usual papers or politicians warning the public about the Huns. What I personally thought has been missing from the debate is how the Muslim community, or indeed, the Turkish community in the U.K. feels about the Brexit campaign. Turks in Turkey are mostly blissfully unaware of the demonization they have been subjected to in these past few weeks. It is Ramadan and school vacation time, and they are busy planning holidays. Many of them will stay in the country and some - but remember, some of the 70 million is still a good number - will venture abroad. Most will choose countries that require either no visa, or countries that do not charge an arm and a leg for a visa like the U.K. does - countries that may actually, like anyone who can do math, be happy that 12 million Turks will be coming to their country to spend money.