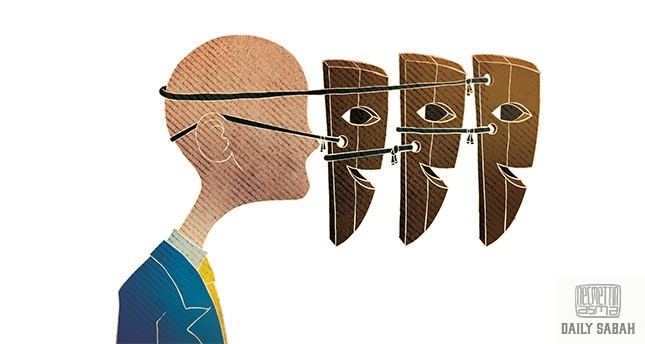 Illustration by Necmettin Asma - twitter.com/necmettinasma
by Ergin Yaman Jun 24, 2016 12:00 am

If the Western world is really sincere about addressing migration and other global problems to keep them from getting worse, it needs to review its role thus far in the Muslim world and Africa

We know from history that states always try to disguise the main issues with secondary issues to contain the already difficult situations from getting worse, as revealing the main issue could have catastrophic results for the owners of the settled order. Also, by focusing on secondary issues, the true guilt and accountability is covered, which then allows the guilty party and those accountable to not only get away with their mistakes, but also further advance their ill-designed goals.

The current rhetoric about immigration that Western politicians use has such a dimension and many further ills to it. Seen as an all-purpose tool, it has been the main driving force to convince Westerners to back certain political agendas that would normally lose momentum without this immigration rhetoric. Having the full-support of the media, Western politicians are unfortunately spreading hate, discrimination, intolerance and a lack of appreciation for diversities, and people are buying hate on a daily basis from their local newsagents, TV channels, magazines and so on.

Portraying immigration as the cause of issues in the Western world

Westerners are told that immigration not only creates a significant burden on the economy, health, education and other services, but also that it is a risk to their safety. But is this really the case? We have seen that the efforts of anti-immigration politicians have increased in parallel with the economic crises that various European countries have been experiencing in the recent years. Unfortunately, instead of discussing the role of corrupt fiscal and political policies in the creation of the economic down-turn in Europe and the U.S., immigration has been the most discussed, blamed and exploited issue. Far from addressing the corrupt order or working to create further resources to address the strain on public services, discussions continue to be on how immigration is having a number of effects on individual countries. It is unfortunately the main discussion topic in the debate on Britain's future in the EU and the United States' presidential campaigns. We have an issue at hand that, ironically, comes before the economic and political failure of the Western world in terms of its significance.

Just as it fits the purpose, people are not provided with the whole picture of immigration, and instead are only advised of its impacts. As much as immigration could be or is a cause for many things, it is an outcome of certain policies adapted in various countries across the world. But immigration has been displayed on social media and by politicians merely as a trigger for issues that the West experiences today or is likely to experience in the future. Why would a family or an individual take up a treacherous journey, many of which have fatal ends in some unknown seas? Why would a father put his family through humiliation and face being tripped by a Danish reporter? Why would people put themselves in a situation whereby the countries they arrive in consider seizing their valuables? Why do the immigrants who are humiliated and belittled on a daily basis not consider returning to their home countries? Could it be because they have no countries left behind to return to? Sadly, Islamic countries and other African countries have been turned into trash countries that have names but do not exist. Can we really talk about the true existence of Iraq, Afghanistan, Syria or Libya?

Unfortunately, there is no one single Islamic or African country where various types of conflicts are stoked on a daily basis. From the invasion of Afghanistan in 2001, Iraq in 2002, the coup in Egypt in June 2013 to the Gezi Park protests in Turkey in May 2013, there are a number of examples that would suggest the Western world's stance or role in relation to issues in the Muslim world has caused more conflict, if not always, than peace. These conflicts have had many implications and have cost many lives. Of course, one of these implications has been migration from unsafe, conflict-ridden countries in the Muslim world and Africa to Western countries. This being the case, far from taking responsibility in the role the Western world has played in the current issues that the world is facing, including the increasing migrant crisis, using immigration as a way to advance political agendas in the U.S. or various other countries in a very offensive way is not only completely unethical, but insulting to their own citizens, as Westerners are misled to believe that immigration is the cause of the issues when in reality, it is an outcome.

Muslims or Africans who have not been allowed to continue their lives in their home countries due to various conflicts and have gone through many ordeals are now stigmatized as potential perverts, terrorists or swarms in countries that they have fled to for peace. So, in addition to being denied a future in their own countries, they are now denied one in the countries they have arrived in. On top of this, their destitute situation is used opportunistically to re-shape the political structure in the West, which is probably the lowest that policy-making could go

If the Western world is really sincere about addressing migration and other global problems to keep them from getting worse, it needs to review its role thus far in the Muslim world and Africa and learn lessons from the fact that short-term gains in realpolitik at the expense of people's lives produce only long-term issues. Additionally, it needs to see that strong and prospering Muslim or African countries will be key to addressing current issues around terrorism, migration, famine and poverty. The alternative is clearly not in the best interests of the West and humanity at large.