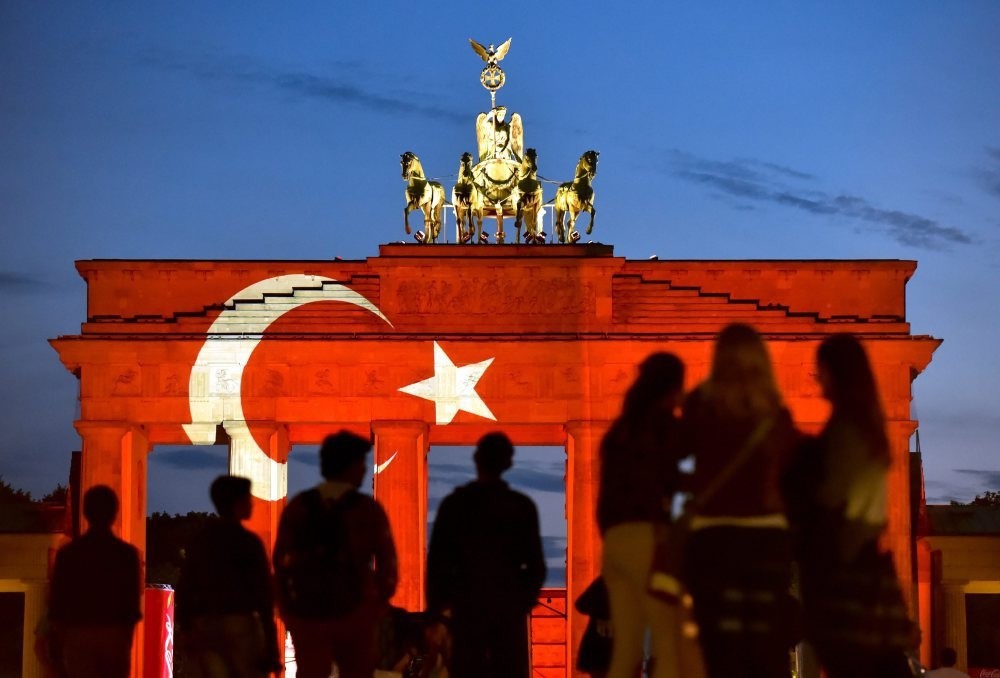 People looking at the Brandenburg Gate onto which a Turkish flag is projected to show a support for Turkey a day after the attacks at Istanbul's International Atatu00fcrk airport, Berlin, June 29, 2016.
by Ozer Khalid Jul 01, 2016 12:00 am

Global terrorism has hit once again the heart of Turkey in Istanbul. The attack at Istanbul Atatürk International Airport, similar to the one at Brussels Airport, is proof of DAESH targeting Turkey

Since 2015, Turkey, a strategic NATO partner for the U.S. and the West in the war against terror, and a key ally to the EU in terms of intelligence sharing, has been teetering on the razor's edge of terror. Turkey hovers under a sword of Damocles of gruesome suicide bombings, some attributed to DAESH and others claimed by Kurdish terrorist outfits. Turkey finds itself torn between the devil and the deep blue sea, fending and fighting off both Kurdish terrorists and DAESH.

After the attack at Istanbul's Atatürk International Airport, it is likely that Turkey will now strategically give top priority to the threat from DAESH, giving it equal weight as it does to Kurdish terrorism and the dangers posed by an unsavory neighboring dictator by the name of Bashar Assad.The tragic attack in Istanbul bears broader geostrategic implications. As Europe undergoes seismic political shifts, witnessed most recently by Britain's vote to leave the EU, the Istanbul attack may scupper Turkey's bid for EU accession in the future, which has already been undermined by former London Mayor Boris Johnson and the fearmongering Brexit campaigners, as nationalists throughout Europe will continue fearmongering and using this tragic terror incident to highlight Turkey's EU entry as a carte blanche for terrorism to spill over into mainland Europe, a continent already beset by unhealthy nationalism, insularity and intolerance.

During Ramadan this year, DAESH launched lethal attacks in Afghanistan, Kenya and Lebanon and took credit for the massacre in Orlando as well, although Omar Mateen's Freudian self-hate and possible closeted sexual repression may have played an instrumental part. The motivation for DAESH to carry out such callous carnage in this holy month of Ramadan, a month where Muslims are meant to engage in peaceful introspection, is to commemorate the third anniversary of Abu Bakr al-Baghdadi`s faux caliphate. Sadistic grandeur is their hallmark, so DAESH needed to mark their anniversary with bloodletting. DAESH, contrary to original scripture, brainwashes their adherents with Pavlovian conditioning to believe that sacrifice in Ramadan is more sacred.

The timing of the attack is crucial strategically. In a Ramadan message urging misguided jihad, Abu-Mohammed al-Adnani, DAESH's chief spokesman, instructed zealots to "aspire to battle in Ramadan not seeking anyone's permission," saying this is "the month of conquest and jihad especially for Caliphate fighters in Europe and America." This may mean more attacks are yet to come.

Turkey is ill-fatedly infested with a DAESH network spilling over through its porous border with Syria, which has been active since May 2015. DAESH cells in Turkey have no state support, they operate in informal, underground networks and are well organized, as they are in Iraq and Syria. No group has claimed responsibility for the attack at Atatürk International Airport, but just like the previous DAESH attacks in Suruç, Istanbul and Ankara, the style, techniques and targets bears the mark of DAESH, striking simultaneously on multiple fronts at high visibility sites, stretching emergency services to the limit.

What distinguishes DAESH from other terrorist groups in Turkey, such as the Kurdish PKK and the Kurdistan Freedom Falcons (TAK), is that the latter strike more at local targets, often using car bombs and the perpetrators tend to be women, as they are less likely to arouse suspicion. DAESH, on the other hand, usually uses men, targets international sites and transport hubs, as in Brussels, seeking to cause global shock and awe.

Many ask why DAESH targets Turkey. Some believe that Ankara's rapprochement with Tel Aviv bothered DAESH enough to strike. Others say that Turkey is mounting an operation against DAESH in areas like Manbij where Kurdish forces are gaining territory and traction, compelling DAESH to retaliate, as DAESH needs to keep winning the propaganda war as it loses territory.

The attack at Atatürk International Airport has already brought far-reaching changes to Turkey's foreign policy. Today, Russian President Vladimir Putin spoke to President Recep Tayyip Erdoğan and they agreed to normalize trade ties, thawing the ice and ending the stalemate ever since Turkey shot down the Russian fighter jet. It is likely that Turkey will rejoin the coalition airstrikes, as Russia and Turkey patch up relations.

DAESH thirsts for recognition to keep fueling its toxic global recruitment drive, both online and offline, as it faces unprecedented losses of territory, including the northern Euphrates, Fallujah, Qayyarah, Kirkuk, Tikrit, Mosul and northern Syria. Nobody wants to join the losers, especially given the liberation of Hit, the meaningful traction by Kurdish forces and the intensified Western and Russian air campaigns.

So to preserve their recruitment and relevance, DAESH has to deviate attention from such territorial setbacks by inflicting gruesome attacks abroad, especially on soft civilian targets such as Istanbul's Atatürk International Airport, as it gives them instant sensationalist, international publicity. Such atrocities keep DAESH in the media spotlight, intensifying its recruitment drive, propagating its divisive anti-Western propaganda and continue its image and initiative of shocking and reshaping the world - something it has done with alarming alacrity.