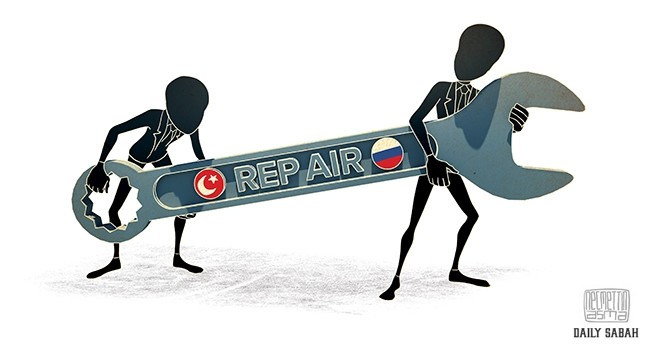 Illustration by Necmettin Asma - twitter.com/necmettinasma
by Maria Beat Jul 04, 2016 12:00 am

Turkey and Russia are natural partners due to their geographic location and close links with their neighbors in the Middle East, the Caucasus and the Black Sea region

Well, it seems to have finally happened: Turkey and Russia made up. The surprise development happened last Monday, June 27, when guided by political wisdom, President Recep Tayyip Erdoğan gave Russia in writing his regrets over Turkey's downing of a Russian military jet last November , which created an unprecedented crisis in Turkish-Russian relations.

Following up on this, in a matter of days Russian President Vladimir Putin volunteered a phone call to President Erdoğan that lasted 40 minutes and was "open and positive." Apparently the two heads of state had a lot to discuss after a seven-month break in communication during which Turkish-Russian relations were on stand-by, war mongering was on and mutual hostility on the rise. All these months Russia waited in anticipation for Turkey to render its apology for a notorious accident with MIG-25 that resulted in the death of a jet pilot, whom the Russians have nearly made a national hero. Russia's reaction to President Erdoğan's words of regret was clear and immediate: without ado, the letter was accepted by President Putin as a long expected apology to create the solid ground for making peace between Turkey and Russia.

The Kremlin takes the recent development as the beginning of a relations restoration process that is due "to turn over a crisis page of bilateral relations and launch a renewal of joint international and regional efforts as well as to upgrade Russian-Turkish relations as a whole." Turkey has made up its mind as well and developed its own road map envisaging in a step-by-step approach to bring relations back to normal. As such the bilaterally launched process may well turn into a lengthy and not an easy-going development.

No doubt, damage to Turkish-Russian relations was inflicted and it'll take time to bring things back to normal. It remains to be seen, how fast a once flourishing partnership is restored, since a lot of effort is required. A personal meeting of two presidents is an immediate priority and hopefully it won't have to wait long. It's been announced that it'll take place in September in the course of the G20 Summit in China. As of now, the foreign ministers of Turkey and Russia are meeting on July 1 in Sochi to discuss immediate mutual initiatives and arrangements. They are facing a demanding task of approximating the positions of Turkey and Russia in order to build the ground for the fullest possible restoration of once fiduciary relations between these two countries.

It will unlikely be a smoothly going and fast process. Russian society is far from unanimous about immediately restoring the country's relations back to their pre-crisis level. Opinions of the Russian political elite differ from the tough rhetoric of hardliners to the soft stance of the liberal-minded minority. Still, President Putin's stance in support of an instant restoration of Turkish-Russian relations has been expressed loud and clearly to make it a guideline for Russia to pursue, and this is no doubt.

The Turkish tourism sector suffered the most from the Turkey-Russia confrontation, both putting the hotel business on the Mediterranean on the verge of bankruptcy cost and depriving millions of Russians from spending their annual vacation at the shores of the warm seas. The share of Russian tourists among all the visitors in Turkey shrank from 13.2 percent to 1.65 percent during the past year. In appreciation of this situation and straight after the phone conversation with President Erdoğan, President Putin instructed the Russian authorities to remove all restrictions on travels to Turkey imposed on the national travel agencies after the November accident. Commendable as it is, this move will hardly generate an immediate positive effect due to its timing: summer has nearly half gone.

Turkish-Russian trade relations will benefit as well and Turkish imports to Russia will experience a boost while meeting the Russian market demand in seasonal vegetables and fruit, and miscellaneous commodities. In comparison with the beginning of 2014, Russian imports from Turkey were registered as 75 percent less in May 2016.

Restrictions will be removed as well from Russia's construction sector that was subjected to heavy red tape and additional bureaucracy in regard to Turkish contractors at the beginning of the year. Turkish contractors traditionally topped the list of foreign contractors in Russia back since the 1990s and accounted for an impressive share of 20 percent of the construction workload in the beginning of 2015. As well, they may well now expect a comeback of the visa-free regime put on stand-by in January 2016.

IMPORTANCE OF THE ENERGY SECTOR

The energy sector will be a prime beneficiary. The spokesman from the all-powerful Gazprom didn't wait long to announce his company's anticipation of a resumption in negotiations over the Turkish Stream construction abruptly put on stand-by by the jet crisis last November. "Gazprom is and has always been open for a dialogue on the Turkish Stream," the TASS Russian news agency quoted him as saying. The Kremlin voiced a less optimistic forecast of the situation around the Turkish Stream development. According to Kremlin spokesman Dmitry Peskov, "it's too early to resume talks about in which direction the Russian gas will go."

Well, so far so good, but it's not as simple as it may seem at a glance. The seven-month stand-by in relations has generated new trends and has established new priorities for Turkey and Russia.

In the process of living under sanctions for a few years by now, Russia has managed to foster development of certain national productions and even sectors that have remained underdeveloped since beginning of the 1990s. The process was triggered by the EU sanctions imposed in 2014 and it motivated Russia's government to support local producer instead of relying heavily on imports. Russia claims to have got rid of its dependence on imports by two thirds and the process continues to go on. This is a relatively new reality that has to become a focus of attention for Turkish producers coming back to the Russian market after more than half a year.

On the other hand, the severing of relations with Russia has motivated Turkey as well to adhere to certain damage control measures in the energy sector. For years concerns have been expressed about reducing Turkey's overdependence on deliveries of Russian gas and recent sad developments in Turkish-Russian relations revealed that the worst scenarios could come true. In response to the newly emerging realities, Turkey acknowledged its plans to reduce within the next few years its electricity generation from imported natural gas, from nearly 50 percent to less than 40 percent. The initiative falls well in line with the active development of wind and solar alternative sources of energy to produce the necessary energy carriers mix to counter balance overdependence on Russian natural gas.

Still, Turkey and Russia are natural partners due to their geographic location and close links with their neighbors in the Middle East, the Caucasus and the Black Sea region. They are tied by organic bonds and are deigned to cooperation. The newly launched process of restoring damaged relations will definitely enrich them with certain elements that are still due to surface in the nearest future.
Last Update: Jul 04, 2016 1:21 am
RELATED TOPICS