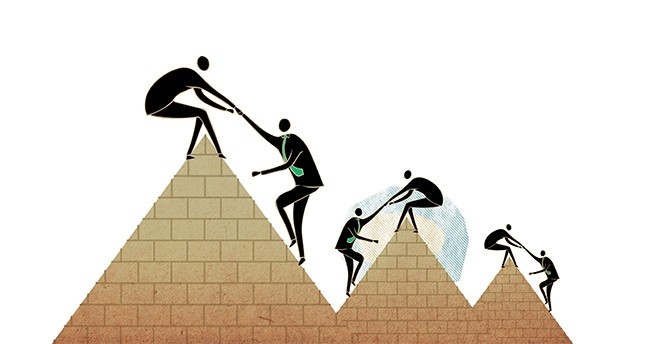 The Saudi ruling dispensation must understand that Egyptians will ultimately get back their lost revolution, and they should fix Egypt before it becomes too late

Saudi Arabia has recently completed a major restructuring of its important ministries. The large-scale overhaul was initiated as part of its "Saudi Vision 2030" to diversify its economy away from its oil base. It is said to be the brainchild of young Deputy Crown Prince Mohammad bin Salman, who has been entrusted with leading roles in the military and economic affairs of the kingdom.

Saudis need to fix their age-old redundant foreign policy similar to the way they are restructuring their domestic policies, especially their policy of supporting the dictator in the most populous country in the Arab world. Their policies in Egypt are very important as they unswervingly impact the Arab Achilles heels in Iraq, Syria, Lebanon, Yemen and Libya and can positively guide their maneuvering in the tumultuous region.

Recently, King Salman of Saudi Arabia was in Egypt for a five-day visit. It was his first official visit to Egypt after taking the throne last year. It is mentionable that it was Salman's deceased half-brother King Abdullah who had helped orchestrate the Egyptian military coup and poured billions of dollars in to reinforce the brutal dictatorship in Egypt.

In the last few years, Saudis have faced many setbacks in their foreign policy from Iraq to Syria and from Lebanon to Yemen, especially under the reign of late King Abdullah who passed away in January last year. Saudi troubles started with the U.S. invasion in Iraq, whereby the U.S. served Iraq to Iran on a platter and later facilitated Iran's entry into the international community after signing the deal that lifted the three decades of sanctions on the country. After a massive setback in Iraq, the Saudis failed to acquire significant American support to dislodge the four-decade Assad dictatorship in Syria, a regime that has been working as a veritable arm of "revolutionary" Iran.

To the embarrassment of the kingdom, Ali Abdullah Saleh, the former president of Yemen, and a Saudi stooge for a long time, switched his loyalty to Saudi Arabia's sworn enemy, the Iran-backed Houthi rebels. The huge humiliation had forced the new dispensation in Riyadh to take stringent military action against the combined forces loyal to Saleh and the Houthi militia.

During the one year of ousted Egyptian President Mohammed Morsi's rule, Egypt openly supported the revolution in Syria and maintained the removal of Bashar Assad as essential to end the civil war in Syria. Soon after Morsi's ouster, the Saudi-backed coup regime in Cairo altered its Syria policy and started backing Assad, the only old-guard dictatorial regime left in the Middle East. Since the military took over in July 2013, the people in Egypt have been forced to be silent about the Syrian crisis.

Egyptian President Abdel-Fattah el-Sissi's Egypt has reached the peak of idiocy. Recently, Tahani al-Gabali, a controversial Egyptian judge, blamed the Muslim Brotherhood for the Syrian regime's recent bombing of Aleppo, which left 250 people dead in just over a week. It is pertinent to say that the Saudi-backed coup government in Egypt has directly strengthened the Assad regime and its chief patron, Iran. As a repercussion of the coup, Egypt, the most populous Arab country, withdrew its support from the Syrian opposition and its supporters started harassing Syrian refugees in Egypt.

Although Sissi siphoned off billions of dollars from Saudi coffers, he discarded them when required. Sissi did not only stall Saudi efforts in Syria, he also ditched Saudi moves in Yemen. Egypt had promised to back Saudi Arabia with ground troops in Yemen if needed, but ultimately balked when the actual military operation started. This is a common trait of dictators - they are only loyal to their greed for power.

During his stay in his "second home" Salman announced another $1.7 billion aid package to Egypt's terminally corrupt economy, and $16 billion of joint investment funds, an industrial park and a causeway to connect Egypt and Saudi Arabia. It is fair to predict that neither the new $1.7 billion economic package nor the proposed causeway connecting the two countries with an oversea bridge will bring economic prosperity and stability to the country where endemic corruption is deep rooted. Previous multibillion-dollar aid packages could not bring any comfort to the lives of ordinary Egyptians due to widespread corruption and the administrative incompetence of the Sissi regime.

Many Egyptians believe that Sissi sold Egyptian national assets for a fistful of dollars. He recently handed over two Red Sea islands to Saudi Arabia in return for a $16 billion investment fund to support an industrial park and bridge over the Red Sea. Whether it is Sissi's skill or Saudi diplomatic myopia, he has been capable of extracting money even after supporting the Iran-backed Russian crusade in Syria to prevent Assad's fall, literally by undermining Saudi policy in Syria.

Even after envisaging a new realism and pragmatism under Salman and his son, Defense Minister Mohammad, the Saudis still seem content with a feckless military dictator in Egypt. They would rather prefer a change in command than a change in the system of governance. A change in command may work as a provisional way out, but it is a fact that Egyptians will not settle for anything less than an enduring solution to eradicate the incumbent, terminally corrupt, totalitarian state structure. Saudis ought to understand that the old instruments of power in Egypt such as money, military, myths, media and manipulation have already been exposed and their effectiveness has been blunted.

Due to their decades of erroneous policies, the Saudis have failed to contain the growing Iranian influence in the region. Iran has taken full advantage of this situation, and the chaos in Iraq, Syria and Yemen has provided it with fertile ground to propagate its sectarian agenda. This is also an outcome of the lackluster Saudi policies of the previous regimes that allowed all this to happen in the first place. Ideally, the series of previous foreign policy setbacks should have prompted Saudi Arabia to try new measures in Egypt. At the time when Iranian expansionist ambitions are at its peak, Saudis were expected to do some course correction in their moribund foreign policy, especially on the Egyptian front. The old policy of propping up dictators will not help the Saudis achieve anything significant in a region grappling with hugely tumultuous conditions.

In the situation after the post-Arab Spring awakening, it has become increasingly difficult for dictators to hold on to power as they used to before. The Saudi ruling dispensation must understand that Egyptians will ultimately get back their lost revolution, and they should fix Egypt before it becomes too late, such that even the time for saving face vanishes. If new Saudi dispensation is really serious enough to meet the emerging challenges in the region, then they will have to refit their foreign policy by quickly solving the Egyptian conundrum.