Aleppo: Turning into a game changer in Syrian war 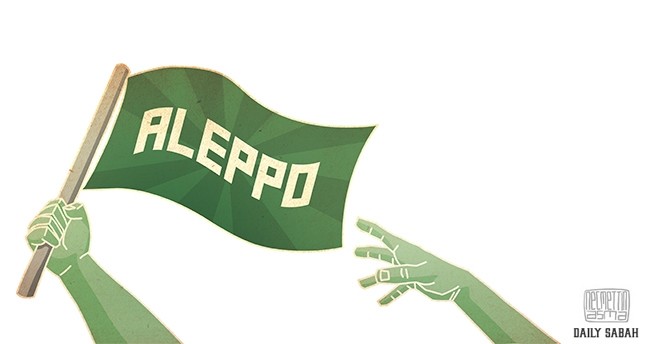 Illustration by Necmettin Asma - twitter.com/necmettinasma
by Merve Çalhan Jul 12, 2016 12:00 am

Either Aleppo falls or it will recaptured by regime forces, but the direction of Syria's wretched war will change and neither the region nor Europe can be shielded by the effects of the Aleppo battle

Aleppo has turned into a crucial battleground since the Geneva peace talks were derailed and collapsed. After ongoing, intensified conflicts, Aleppo, Syria's commercial and manufacturing center before the civil war erupted, is currently best known for being the venue of a humanitarian catastrophe where Russian warplanes are pounding heavily populated civilian areas. In the run up to the sixth year of the Syrian civil war, there is evidence of the long-standing wars' ability to change a city's collective memory. While the collective memory of a city plays an illustrative role in identifying a city, which then enables cohesion within the different strata of society, Aleppo has steadily passed into the hands of government forces and various sub-state actors that are trying to maintain its collective memory. The vital point of recapturing Aleppo with its disrupted collective remnants is still a matter of life and death for the Syrian regime and liberating the city would be a psychological turning point, maybe ending up with the regime forces being bogged down in an endless conflict. So what is the reason for putting the reclaiming of Aleppo back on the Syrian regime's agenda?

WHY ALEPPO MATTERS TO THE SYRIAN REGIME

The Syrian regime has ignited new conflagrations in opposition-held neighborhoods of Aleppo since February when the Geneva peace talks were formally suspended due to Russia stepping in to thwart rebels located in the north of Aleppo, stiffening the defenses of the Syria regime forces. Assad did not have any intention of yielding the floor to numerous opposition fighters to make their voice heard in the eyes of the international community. In addition, standing by Russian Foreign Minister Sergey Lavrov, Assad strongly clung to the idea of Aleppo being held by al-Qaida-affiliated, illegal armed groups, and therefore Russia exempted Aleppo when Lavrov declared the cessation of hostilities on Feb. 27. However, Aleppo is shielding various sub-state actors that are not directly affiliated to al-Qaida constituents and Assad does not want to serve an alternative headquarters for opposition fighters on a silver platter while he has a chance to exhaust the battered rebels' power.

US EFFORTS IN ALEPPO FACE SKEPTICISM

Some fighting groups from the Syrian opposition forces such as al-Jabhat al-Shamiya, Jaysh al-Mujahideen, 13/14 Division and Northern Division, which are relatively independent from Ahrar al-Sham and al-Nusra Front, are being trained by the U.S. in northern Aleppo. It is blatantly obvious that Russia and the U.S. are not on the same page in their assessment of which rebel groups are illegal. According to Putin, armed groups in Aleppo failed to fulfill their promises to drift away from the axis of radical Salafist-jihadi groups so they should be stamped out from the battleground swiftly. Therefore, public opinion is being molded in terms of staunching the flow of U.S. support for these groups to achieve Russian objectives in Syria. According to some analysts, the U.S. has considerable gaps between objectives and reality in Syria. Many commentaries have stressed that the U.S. should design clear strategic interests and more coherent strategies in Syria. Recently, as dozens of U.S. state department officials signed a confidential document accusing Obama of attacking the Assad regime and causing direct conflict with Russia and Iran. The document also urges drastic changes to U.S. policy toward Syria, underlining the creation of closer partnerships with moderate rebel forces to fight against both DAESH and the Assad regime rather than the previous strategy based on relative rapprochement with Syria.

According to the latest information, U.S.-supported armed groups are clashing with regime forces in the northern outskirts of Aleppo. Reportedly, regime forces are advancing on the Mallah front as Russia stepped up heavy airstrikes north of Aleppo city, but the clashes of U.S.-supported armed groups seems insignificant and inefficient vis a vis the large scale offensive of regime forces and Russia. Apparently, the U.S.'s recent strategy in Syria plays into Russia's hand in keeping alive a low intensity conflict between U.S.-backed armed groups, regime forces and DAESH to pursue the constant shift of a powerbroker. In a way it is hard to mention the presence of any well-defined U.S. policy in Syria. In fact, it is hard to find the primary policy of both Russia and the U.S., which have focused on sweeping away DAESH from the region. The covert goal of the regime forces is to prevent the dominance of a sole armed group in order to save time for Hezbollah and Shiite militias backing up by distracting and keeping busy numerous rebel groups in the battlefield. Even though Shiite militias backed by Iran are already there, the leader of the Lebanese militant group Hezbollah, Hassan Nasrallah, declared they will amp up their presence by sending more fighters to Syria. For the regime forces complaining of manpower shortages, the allies' support is significant in changing the direction of the war.

ALEPPO AS A HAVEN FOR HOPE FOR MIDDLE EAST

So far the collective memory of Aleppo is based on a mosaic of rebel forces with different aims and expectations within a disputed territory where battlefronts are shifting constantly. Either Aleppo falls or it will recaptured by the regime forces, the direction of Syria's wretched war will change and neither the region nor Europe can be shielded by the effects of the Aleppo battle. Aleppo is a key source that will define much of what happens next in the region. The question everyone should ask is whether a possible defeat of the opposition forces could pave the way for a further empowered DAESH and what are the possible scenarios that will cause the reshaping of the collective memory in the city? Even though the future seems to be daunting for the region, Aleppo is still sheltering hope as a possible prominent guarantor of the region's stability.