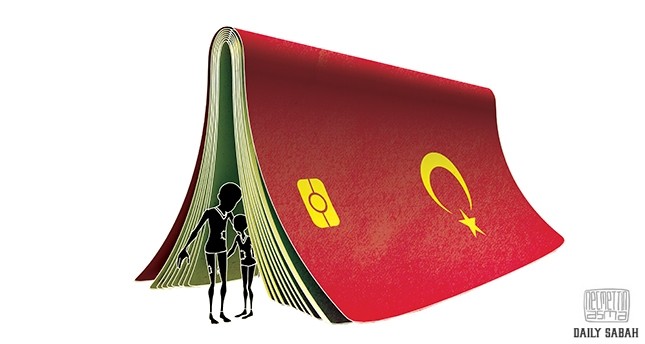 Illustration by Necmettin Asma - twitter.com/necmettinasma
by Fadi Farasin Jul 13, 2016 12:00 am

More than five years have passed since the beginning of the Syrian revolution and it has shaped up to be one of the greatest tragedies in contemporary history. All in all, about 350,000 people have been killed, 1.5 million have been wounded, 4.8 million are refugees and 7.6 million have been internally displaced. As this human tragedy has unfolded Turkey has shouldered the greatest burden among all countries on earth, taking in 2.74 million Syrian refugees, according numbers from the United Nations High Commission for Refugees (UNHCR), and in the process becoming the biggest refugee-hosting nation in the world.

Syrian refugees have been accepted in Turkey. This acceptance is in line with the solidarity that Turkish people have with Syrians and is inspired by the Islamic model of "Ansar and Muhajirin" and the teachings of the holy Quran. This model of acceptance has been facilitated by the historical, cultural, religious and even family commonalities Syrian refugees share with the people of Turkey.

The recent announcement by President Mr. Recep Tayyip Erdoğan in the southern city of Kilis that Turkey is planning to offer Turkish citizenship to refuges was received with indescribable joy and happiness by Syrian refugees. The few who I have talked to since Erdoğan's announcement could not contain their excitement and gratitude for the step and look forward to the day they become citizens of a country they love and admire. They emphasized their intention to pay back the favor to the country that opened its arms and heart for them in their darkest days by becoming model citizens and contributing to Turkey's advancement and prosperity.

However, the feelings of enthusiasm among Syrian refugees are not matched by the Turkish public, with many objecting to granting citizenship to Syrian refugees. A quick scan of discussions on social media reveals that opposition to this step is rather widespread. Also, discussions I had with many Turkish friends reinforce this conclusion with many expressing skepticism and anxiousness. It seems that the high level of acceptance Turkish people have for Syrian refugees has its limits and ends when the issue of citizenship is raised.

What is driving the Turkish public attitude is a lot of misinformation, misperceptions and even fearmongering exercised by Turkey's opposition parties. If we put the misinformation, misperceptions, and fear mongering aside and focus on the facts, then it is easy to see that the evidence shows that granting citizenship to Syrian refugees is not only the moral and humanitarian thing to do, but is also in Turkey's economic, social, and strategic interests.

Syrian refugees provide a boost to the Turkish economy at a time it needs it the most, and granting them citizenship will enhance this boost. According to a report from the Organization for Economic Co-operation and Development (OECD), the Turkish economy is projected to grow from 3 percent in 2015 to above 4 percent in 2017 in part due to the effect of Syrian refugees. Granting citizenship to Syrian refuges will also have a positive effect on the labor market. One piece of misinformation regarding Syrian refugees is that they have caused the unemployment rate to shoot up. However, in the Turkish border city of Gaziantep, which has a high number of Syrian refugees, the unemployment rate has actually dropped since their arrival. Recent research shows that while Syrian refugees in Turkey, the majority of whom have no formal work permits, have displaced unskilled, informal and part-time workers, they have also generated more formal non-agricultural jobs and an increase in average wages for Turkish workers. Another widespread misperception the public has is associating Syrian refugees with theft, prostitution, property damage and other illegal activities. However, all the studies indicate that crime rates are lower among Syrians than locals. And then there is the misperception of Syrians refugees being mainly beggars. Hard working and ordinary Syrians have been negatively impacted by the phenomenon of Syrian beggars, who in many occasions use aggressive tactics when begging, causing great unease for the local people - but these beggars do not present the average Syrian refugee and in reality are professional beggars who used to beg in the streets of Syria before the start of the revolution.

Turkey has long benefited from its young demographics with a large portion of the population young adults. However, this youth bulge seems to have reached its apex. With the fertility rate dropping to 2.14 children, Turkey has become one of the fastest aging countries in the world. Government attempts to raise the fertility rate have had little success and granting citizenship to Syrian refuges will help reverse this trend and achieve Turkey's strategic goal of maintaining a young population.

One lesson we learn from refugee crises throughout the history of humankind is that the majority of refugees do not return to their home countries. The reality is that many Syrians will stay in Turkey and will not return their country even when the civil war ends. This is especially true for the more than 150,000 Syrian infants and children who were born in Turkey and do not know any other home. The Turkish public has to be prepared to accept the permanent settling of Syrians in Turkey and eventually offering them a pathway to citizenship. Therefore, it is the duty of the Turkish government, thought leaders and community leaders to explain why granting citizenship to Syrian refugees is in Turkey's best interest and to dispel the misinformation, misperceptions and counter the fearmongering spread by opposition parties.

* Political researcher and analyst based in Ankara
RELATED TOPICS