Nice was to be expected, the West needs to think of the war against DAESH as just the beginning 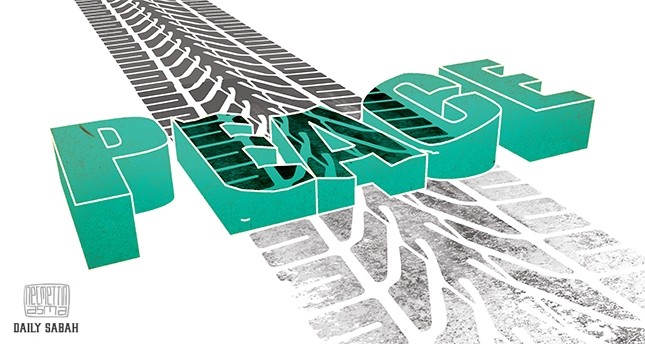 Illustration by Necmettin Asma - twitter.com/necmettinasma
by Martin Jay Jul 19, 2016 12:00 am

The tragedy of over 80 lives being lost in Nice is that France and other EU leaders refuse to take the DAESH threat seriously, and rather delude themselves that they are winning the war they are fighting in the Middle East

The tragedy of over 80 lives being lost in Nice is that France and other EU leaders refuse to take the DAESH threat seriously, and rather delude themselves that they are winning the war they are fighting in the Middle East

The battle against DAESH both in Iraq and Syria is certainly changing both from a military and a geopolitical perspective. But I struggle with this notion that we should be shocked by the Nice attack as, quite apart from it having a greater shock factor - Westerners in their own country - it is sadly just part of a theme that has been staring us in the face for quite some time now.

The Western media has a rather unforgiving habit of not giving too much press coverage to other DAESH attacks around the world and so the experts on talks shows now are lamenting about the shock of the new. But it is really nothing new. And we should prepare for more of it.

Baghdad, Istanbul, Bangladesh, Lebanon and Saudi Arabia in previous weeks also were bombed by DAESH, with a particularly gruesome attack in Baghdad claiming almost 300 lives and causing a minister to resign in a part of the world where ministers do not really ever fall on their swords so often.

There is a lot of confusion out there about the war against DAESH, not helped by U.S. media, which is placing too much emphasis on DAESH defeats in Syria and Iraq. Yes, it is true DAESH lost an area the size of Ireland - a quarter of its territory - to hostile forces in the last 18 months in Iraq and Syria. According to agencies, the territory controlled by these extremists shrank from 90,800 square kilometers in January 2015, six months after it declared a caliphate in Syria and Iraq, to 68,300 square kilometers.

An intelligence research group even told Reuters recently that the defeats on the battlefield will lead the group to "step up attacks on civilian targets in the Middle East and in Europe."

But for anyone living in, say, Lebanon, this is hardly news. People here know only too well that the tactics of DAESH are always to hit out at soft targets of civilians when it loses battles with conventional armies. This has been going on for that last two years here and is now spreading to other countries.

Hardly good news then if the battle on the ground simply moves from conventional fighting to cowardly acts of terrorism around the Middle East. And now Europe.

And yet Europe, in so many ways, is to blame. Still, the EU was slow to get off the ground with new anti-terror rules that punish those who help European jihadists, and even experts are saying that even when a new directive is adopted, it will not work as it relies heavily on intelligence sharing. Europe also does little to stop the glorification of DAESH through allowing media to constantly make reports on DAESH propaganda - something regular readers of my columns will remember I have been complaining about for years. Young, radicalized jihadists are drawn to DAESH in Syria through watching YouTube videos. Intelligence. How is it that Europe has the intel to defend itself against a third world war but little on its own Muslim citizens? French President François Hollande's immediate reaction on Friday to send more bombers to Syria was typical of an EU leader who has lost a grasp on where the war should be fought - on home ground. Most of DAESH is made up of foreign fighters from Belgium, France and the U.K.

Intelligence and poor anti-terror rules in the EU are so poor on tracking DAESH that many could argue it was inevitable that the fight would divert from Iraq and Syria to the European mainland. Two of the Paris bombers were arrested and held on Europe's border with fake Syrian passports. Security officials knew they were terrorists but had no legal case to hold them. Similarly, one of the Brussels bombers was sent back by Turkish authorities with a tip to Belgian police that the individual was trying to join DAESH, but Belgian police had no legal basis to arrest him.

But will Nice be the wakeup call for Hollande and others to see just how vulnerable, and therefore attractive, the European continent is?

It is unlikely. Europe has too many problems on its plate at the moment with the EU project looking like an amateur circus balancing act at best or an outdated, elitist deluded organization at worst.

Taking a close look at the battles that DAESH has lost in recent weeks, it is interesting that it retreated from many towns without putting up a fight. This, to me, gives the indication that it is more disciplined and less radical than we might have thought. Also, importantly, it is worth considering the bombings that are commissioned in all of these cities in the Middle East and Europe. Perhaps the Nice bombing was not a DAESH job - but no doubt the group will take credit for it - but nonetheless, its ability to quickly put into action car bombing is impressive. It shows that there is a network there and no matter how hard we hit them on the battlefield, this will only ensure that this movement in many ways grows stronger and stronger as going underground and operating along more conventional lines as a terror cell is proving to be very successful for them. In places with dire security issues like Iraq - or more liberal Arab countries with high numbers of Shiites like Lebanon - there will always be car bombing after conventional defeats. It is despicable, cowardly and, yet, inevitable.

Their aim is to enhance political instability in these Arab states and so the payback is there in abundance. The payback in places like Nice is that the far right groups pour oil on the flames of anti-Muslim anger and this, in turn, brings more volunteers to leave Europe and head toward Syria or worse sign up to do heinous acts on their own soil. U.S. generals who have been quoted recently in the U.S. press, along with Hollande, both seemed to be missing the point about the war against terror. The harder we hit DAESH in Syria and Iraq the more it intensifies both its international acts of terrorism and its recruitment drive. In America, Republican Newt Gingrich called for more Muslims in the U.S. to be deported, while on fighting terror he said simply: "We better rethink the rules, or we are going to lose the war." On the latter point, he is right to think of a total rethink, but intel and human rights laws are failing the Europeans who can't keep track of ISIS on their own soil. A more radical approach towards Muslim communities who harbor terrorists might soon be on the cards from European leaders who fear that far right groups will take away their votes with both German and French leaders soon to head to the polls.