Crashing silence at outset of coup, roaring at post-coup purge 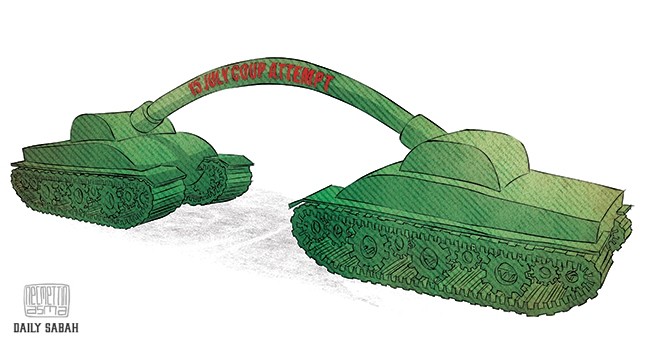 Illustration by Necmettin Asma - twitter.com/necmettinasma
by Ahmed Al-Burai Jul 22, 2016 12:00 am

The people of Turkey fought for their democracy, the whole world kept a deafening silence

Unabashedly, Jean-Marc Ayrault, the French foreign minister, told journalists that his country expects Turkey to strictly enforce the rule of law to fully protect human rights, and the coup attempt does not give carte blanche to the Turkish government to crack down on what he called opposition factions.

The honorable minister seems to deliberately be forgetting that his president flagrantly hijacked French law when he announced that "France as a whole is under the threat of Islamic terrorism" a day after 84 people were killed in a brutal terrorist attack when a Frenchman happened to be originally Tunisian and named Mohammed deliberately drove a 19-ton cargo truck into crowds celebrating Bastille Day. He promptly was called a Muslim jihadi terrorist, although his neighbors reportedly described him as a violent loner who liked to drink and go salsa dancing.

After the terrorist attack, France's parliament voted to extend the state of emergency for six months. In comparison, Turkey, which lived through one of its most melancholy nights in its modern history, which was set to derail its democracy to a militant autocracy. President Recep Tayyip Erdoğan declared a state of emergency on July 20

for three months, adding that European states have no right to disparage Turkey's democracy and Ayrault has to "mind his own business," adding: "If he is keen on a lesson in democracy he can very straightforwardly get free lessons from us."

Turkey's reaction strikingly paints a colorful portrait of a mature, well-established democracy. Whereas many countries that deceptively claim to back democracies in the Middle East hesitated for a long time before backing Turkey's democratically elected president and government, they waited a long time before labeling what happened in Turkey as a coup.

There was no doubt that what happened on Friday, July 15 was unequivocally an attempted military coup. Yet the American Embassy in Ankara termed it as an "uprising," let alone Egyptian and Arab channels promoting unsubstantiated and even fabricated news that reflect their wishful thinking. In a glaring media scandal, high viewing Arab-language channels displayed unfounded reports claiming that Erdoğan was over and had absconded or might be on his way to Germany.

Western media channels aired their deadly toxins that definitely echoed their actual conscience. Some, like Ralph Peters, who is a Fox News strategic analyst, went further to say that Turkey's last hope died.

German Chancellor Angela Merkel said: "Respecting human rights and protecting minorities are the foundations of real democracy." She also added that Germany reiterates that any political change must only be applied through Parliament and democratic means. However, her foreign minister, Frank-Walter Steinmeier, said: "Reinstatement of the death penalty would constitute a genuine, imminent threat for Turkey's bid to join the EU."

One bizarrely wonders if a coup happens and claims the lives of more than 265 innocent civilians, desperately attempts to kill the president of the country, occupies government premises and state facilities, attacks Parliament and the Presidential Palace, abducts high-ranking officials and hijacks the whole system of democracy, what recommendations does the EU and its members suggest to deter and punish the merciless and ruthless putschists?

EU officials' claim that Turkey's unjustified, violent purges of the military post-coup may lead to social and political tensions as it extends to include other factions that may not be directly involved in the foiled coup attempt, and that enhances their concerns that the thwarted coup will be used as a pretext for Erdoğan to consolidate his power and one-man rule.

Relentlessly, the Turkish government has moved swiftly to round up and contain the Gülenist Terror Organization (FETÖ), which is principally blamed for the coup attempt. The purges have eviscerated at least 118 generals and admirals. The government has also suspended 8,777 staff members from the Interior Ministry in addition to 100 intelligence service employees; 2,745 judges and prosecutors have been listed to be taken into custody and 1,577 university deans have been asked to resign.

This moved U.S. President Barack Obama to reveal his concerns due to the rough treatment of some of the detained coup conspirators. One does not need to remind Obama that a coup happened in Egypt and the coup perpetrator became president there and was received and welcomed in the United States. The general of that coup killed thousands of innocent people and detained tens of thousands and the deafening silence from Obama bitterly depicts the three wise monkeys - see no evil, hear no evil and speak no evil.

It is needless to remind those who express their serious concerns that a list was reportedly found in the pocket of a putschist general designating colonels and officials to take over all the crucial positions once their coup attempt achieved its objectives.

It was not only that purported list that provided the government a record of the long list of conspirators and collaborators with the planners, it was in 2013 when then Prime Minister, Erdoğan exposed their dirty schemes of eavesdropping on the president, prime minister and their aides. That scandal exposed their filthy plan to control the entire executive and judicial system in the country by what is known as the "parallel structure."

Ironically, Fethullah Gülen claimed that the coup might have been designed, directed and staged by Erdoğan's regime to keep a firm grip on the institutions of the country. Gülen said on Sunday that he is fully committed to any extradition decision legitimize a renewed onslaught on the judges and military.

It is rather absurd and ridiculous that Washington invites Turkey to present any coup evidence against Gülen, particularly when Erdoğan, whose Turkey is a major ally of the United States, and plays a chief role in the whole region personally calls Washington to expatriate a Turkish citizen for a fair investigation and trial after a deadly coup that he is believed to directly be involved in instigating. Turning down Ankara's demand is believed to seriously jeopardize Turkish-U.S. strategic relations.

Erdoğan issued the call while addressing the crowd gathered a day after the night of the coup, and he unswervingly addressed Obama, saying: "I call on the United States and President Barack Obama: Dear Mr. President, I told you this before, either arrest Fethullah Gülen or return him to Turkey. You didn't listen." Turkey is determined to "clean the virus" from all state institutions, and it has the full right to do so, mainly because when the people of Turkey fought for their democracy, the whole world kept a deafening silence. They better plunge into their silence.