Dear West: Look in the mirror before criticizing Turkey 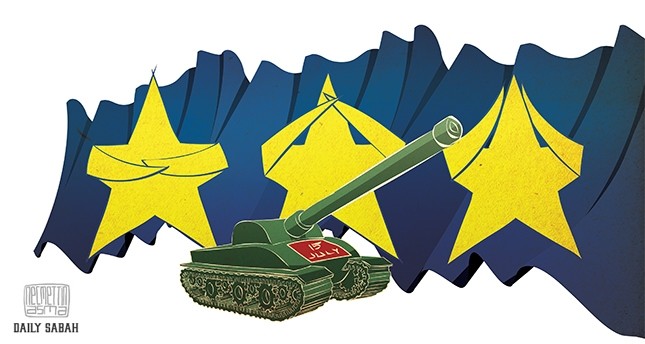 Instead of criticizing Turkey and her democracy, Europe and the U.S. should be ashamed of what they did in the Middle East and how they were enablers of tyranny and oppression, not just silent watchers

U.S. Secretary of State John Kerry did not make this statement "The [Turkish] military did not take over, to the best of our judgment - so far. To run the country, there's a civilian government. In effect, they were restoring democracy." The reason why it was not said is not the U.S.'s commitment to civilian and democratic rule or its realization of how the Turkish people and institutions suffered from four coups that brought the country to its knees. The only reason that prevented this American diplomat, along with other Western leaders from uttering those words or similar ones was the astonishing reaction and consciousness of the Turkish people who overcame their political divisions and ideological differences and answered the call of their democratically elected president (forwhom many had not voted) to head to the streets, squares and airports to confront the tanks and airplanes that tried to steal their liberty. That defiance and consciousness was the decisive factor that enabled loyal security forces to turn the tide against the putschists.

That brave defiance came with a heavy price, as tens were mercilessly killed and hundreds were injured and institutions of the state came under fierce bombing. However, the price paid in the hours that followed the coup saved the country from a fate not only known throughout its history but across its borders in a very turbulent region.

That bright picture drawn by the Turkish people and their government was contrasted with another dark one. While it was clear that the country was facing a full-blown coup when the first tanks rolled onto the streets, the reaction from the West was disappointing if not shameful. Silence was the only official response from many European capitals. On the otherside of the ocean, John Kerry only broke Washington's silence to say he hoped for stability, peace and continuity in Turkey without uttering a word about democracy or the respect of legitimate elected institutions. He made such a statement following the same line of his embassy in Ankara, calling a full-blown coup an "uprising." Away from official circles, the picture was a bit clearer when many media outlets and so-called experts and analysts - instead of showing solidarity with the people in the streets -- started blaming Erdoğan and his policies. Many politicians could not hide their gloating -claiming that the army was saving Turkey from the authoritarian rule of Erdoğan.

All of this changed suddenly when it became clear that Turkey is not Egypt, and the coup was failing. Support statements started to be released and phone calls were made to show solidarity with the winning side, which happened to be, not as many wished, the president and his government. However, this was not to last long. While the Turkish people were counting their victims and sleeping in streets fearing another putschist wave, what seemed to worry the Western elite was their concern that Erdoğan would get stronger from this coup. And while the government started to carry out a cleansing operation to look for those behind the coup or those who belong to the organization that orchestrated it, the West started lecturing Turkey about democracy and human rights and the freedoms that should be respected and maintained. Those public lectures escalated to direct and indirect threats to Ankara, one time to end the talks to join the European Union and another to scrutinize its NATO membership.

However, Western leaders forget one thing. They do not have the moral capacity or the humanitarian ground to criticize Turkey. The United States till today has not called what happened in Egypt in 2013, a coup, and American arms and cash continue to flow despite mass murders and human rights violations (up to using rape as a systemic weapon against dissent) committed by the Egyptian junta. Almost every European capital welcomed the Egyptian junta leader, signing arms contracts and expressing support for the coup regime in Egypt. European politicians didn't even try to hide their admiration with the Egyptian junta leader who the German vice chancellor referred to as the " impressive president." While Egyptians were shot in the streets, tortured to death in custody and forcefully disappeared from their homes and schools, American and European embassies organized trips for their delegates to visit Egypt to support and praise its new putschist regime. Whatever measures President Recep Tayyip Erdoğan and his government take to tackle the coup plot that hit their country will not be a tiny fraction of what Abdel-Fattah el-Sissi and his fellow generals did in Egypt; yet in less than a week, Erdoğan was criticized and threatened more times than Sissi has been in the whole bloody three years he has been in power.

On the humanitarian side, Turkey did not just open its doors but welcomed more than 3million Syrian and Iraqi refugees fleeing the most disastrous human tragedy in modern history. On the other side, racism and xenophobia was not just promoted by far right wing politicians in Europe and the U.S., but even by mainstream and official ones who closed their countries' doors, letting children drown in embarrassing ways that will shame the West for centuries to come.

Instead of criticizing Turkey and her young democracy, Europe and the U.S. should be ashamed of what they did in the Middle East and how they were enablers of tyranny and oppression, not just silent watchers. Meanwhile, Turkey should not fear the hypocrisy of those who would cheer for the rogue generals if their coup had happened to succeed. Turkey must remember that it is under attack because it established democracy and the rule of law for its people, both values that it must uphold, while doing whatever is needed to eradicate those who tried to turn the wheel backwards.

Finally, the statement at the opening of this article was said by John Kerry about the Egyptian military not the Turkish one. Thanks again for the Turkish people who prevented him from saying it again.