Democracy denied in Muslim world is reclaimed in Turkey 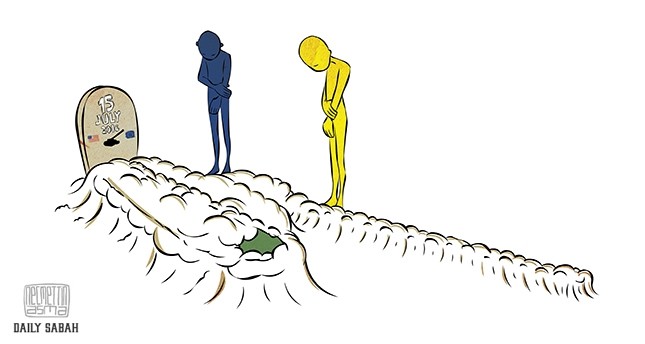 Illustration by Necmettin Asma - twitter.com/necmettinasma
by Ergin Yaman Jul 24, 2016 12:00 am

Democracy, freedom and human rights, which have always been claimed to be Western standards and always used by Western powers to put Islamic countries down but in reality are always denied to Islamic countries, have been successfully claimed by the people in Turkey with the defeat of this coup attempt

The Muslim world has long realized that the Western world's concern was never about democracy, freedom, human rights, rule of law or human dignity. This was testified when the Kurds of Northern Iraq were massacred in 1988 with chemical weapons that were products of the West. It was testified in Bosnia in 1995 when Muslims were butchered within Europe while all Western countries remained unresponsive to this until it was too late. It was testified in Egypt in 2013 when U.S. President Barack Obama blatantly supported the military coup by saying that democracy is not all about elections. It is testified in Syria, which has been turned into a testing ground for military exercises by world powers, and is also a territory that has given rise to a lunatic terrorist group that has served the purpose of vacuuming all lunatics out of Western countries and turn them into warriors who solely target Muslim countries, France and Belgium so far, interestingly.

And most recently it is being testified during and in the aftermath of the failed coup attempt in Turkey. The biased, manipulative and distorting reporting of the events in media such as the BBC demonstrates once again that the voice of Muslims does not matter in the slightest in the eyes of Western politicians and Western media and, more importantly, the owners of both media and politicians who own and direct media and politicians as they see fit to their interests.

Not to our surprise, Western media and politicians have again fallen far from disappointing their owners. The bloody, failed coup, which cost the lives of over 200 Turkish citizens, continues to be minimized in Western media and by politicians in the most degrading and disgraceful manner.

One thing that is very interesting is that Western media outlets such as the BBC normally skillfully express their opposition to matters unfolding around the world. However, it failed massively to disguise its true face when it came to its coverage of the events in Turkey. Withholding the true story, it unfortunately went as far as using the headline "Erdogan: Turkey's ruthless President" on July 16, literally the day the coup was contained and defied by ordinary people who took to the street in their millions after the president's call to do so. The BBC's opposition to the current Turkish government could not have been more obvious when it used another headline on the same day asking why the coup failed. This was the headline of an international news agency that supposedly stands for justice, democracy, freedom and human rights. The BBC's reporting could not get any weaker when its Turkey correspondent, Mark Lowen, still hoped that he could achieve something by still referring to Turkey as "polarized" in his report dated July 16. "Polarized" is one of the favorite words when haters of President Recep Tayyip Erdoğan describe and try to smear Turkey, when in reality, the people of Turkey as a whole came together for the first time since the foundation of the Republic, took to the streets and are still there. He completely failed to capture, consciously or unconsciously, what has been transpiring on the ground. The BBC is not a private media corporation, but a public service broadcaster, so this level of manipulation does raise questions about Britain's sincerity concerning democracy, human rights and freedom as a country. The magnitude of these questions becomes greater when we saw British Foreign Secretary Boris Johnson first tweeting on July 15 when the coup attempt began that he is "very concerned by events unfolding in Turkey." There was no condemnation of the coup attempt or support for the democratically elected government up until Saturday, July 16, when he posted another tweet only in the aftermath of the failure of the coup attempt stating: "just spoken to Turkey foreign minister. I underlined UK's support for the democratically elected government and institutions." Why did he wait to express his support for the democratically elected government and institutions? Why was this support not underlined when war planes were dropping bombs on Parliament and Turkey's key national institutions? Why was this support not underlined when people were under fire from helicopters? Why was this support not underlined when people were butchered and crushed by military tanks? Did he wait for the dust to clear to determine what side to take?

The reporting of events in Turkey in international media and the stance of Western politicians, including the French foreign minister and European Union leaders, evidences that as long as parties with Islamic tendencies are in power, Turkey is and will always remain polarized in the eyes of Western media and politicians even if a party with Islamic values wins elections with 100 percent of the vote. Again, regardless of whether Erdoğan's life was claimed as part of this coup alongside many other top ranking ministers and state officials, Erdoğan will continue to remain ruthless and authoritarian in the eyes of the Western media and politicians.

That is because we have witnessed how mass murderers like Bashar Assad and Egyptian President Abdel-Fattah el-Sissi are deemed less ruthless and authoritarian, if not saviors of democracy, in the eyes of "democratic" and "free" Western politicians and media, which have been treating their citizens like fools by withholding information in relation to a colossal coup attempt in Turkey and devaluing it with trivial criticism and disgraceful arguments against Erdoğan. And this is simply because they feel Sissi and Assad are on their side, and this is what matters.

The Muslim world has witnessed over and over again that no matter what they choose to do they will not escape being smashed and crushed over and over again by the owners of the politicians and media in the West. The participation of Islamic parties in the political arena in all countries across the Middle East has been massively suppressed with the support of Western countries, and their victories have been nipped in the bud apart from Turkey. We have seen that Muslim's choice for democracy, with Egypt and Tunisia the most recent examples, is not going to win them freedom or give them the right to rule themselves independently. We have also seen that Muslims calls to the West to free them from their tyrants have only resulted in worse catastrophes, i.e. Iraq, Afghanistan, Syria and Libya.

Muslims have tested over and over again that no matter what they do, they cannot and will never win the Western world over, as their voice does not matter in the eyes of Western media and politicians who set out all standards and decide who is a terrorist, dictator, extremist, democratic or undemocratic. What is currently happening is active suffocation of Muslims who have been forced to accept that they have no right to breathe. On one hand there is this very handy and all-purpose tool of "extremist terrorism" being used to crush, terrorize, humiliate, belittle and stigmatize all Muslims apart from those who really are committing atrocities, i.e. DAESH, Boko Haram and others. On the other hand, the Muslims who try to realize themselves in the political arena are fiercely denied this right due to their beliefs. As such, Muslims are literally left with no option to survive.

The main issue of Western media and politicians, which again, are tools of the owners of the settled order in the West and around the globe, is leaders that are a barrier to cultural, political and economic colonization. It is a fact that cultural colonization has been achieved around the globe, including Far East countries like China, Japan and Vietnam. As such, the majority of the world's population has been designed to live, think, consume and produce the way the owners of the settled order want. One of the regions where this has not been fully achieved is the Midde East and Turkey. The reason why Erdoğan is the number-one target when there are tyrants like Assad is because Turkey has managed to run away from the caged Middle East and he adamantly refuses cultural, political, economic and military colonization of his country. That's why there is such a relentless hunt to re-cage Turkey.

The people's victory in Turkey is not only significant for the citizens of Turkey, it means hope for all oppressed people in the Middle East. Middle Easterners who were deceived with the false Arab Spring and who have been suppressed to accept that their voice and choice do not matter have now the example of the people in Turkey in front of them to defeat despair. It is therefore of significant importance that the people's victory in Turkey is reinforced and preserved by all means. Because seeing that there is hope and there is a true example of this, Middle Easterners who are thirsty for their own rule will draw on Turkey's example to act one day. Finally, democracy, freedom and human rights, which have always been claimed to be Western standards and always used by Western powers to put Islamic countries down but in reality are always denied to Islamic countries, have been successfully claimed by the people in Turkey with the defeat of this coup attempt, which was achieved in a dignified manner never before seen in history.