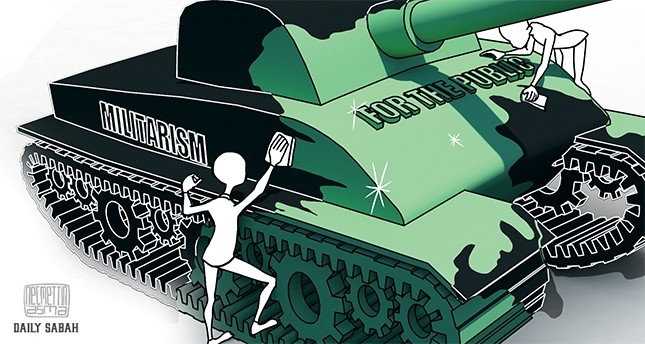 Illustration by Necmettin Asma - twitter.com/necmettinasma
by Mushtak Parker Jul 29, 2016 12:00 am

The dust had hardly settled on what was arguably one the most amateur - and tragic for those who perished defending democracy - coup attempts in modern history, and already pundits and politicians alike in the West were struggling to openly support Erdoğan, reluctantly calling for the preservation of democratic politics and institutions in the country. Unequivocal support for Erdoğan and Turkish democracy was indeed revealingly slow to emerge from the White House and Downing Street on Friday evening, as strategists no doubt were playing a wait-and-see game, hedging their bets.

What was breathtaking and unfortunate was the sheer amount of venom aimed at Erdoğan by so-called Turkey watchers in the West, no doubt finessed by their local supporters, as if Turkish democracy and indeed the country's opposition parties and civil society were in some sort of suspended state and entirely beholden to an all-powerful Erdoğan - a Saruman type straight from "The Lord of the Rings."

One American pundit on CNN was salivating at the prospect of the overthrow of Erdoğan and the Justice and Development Party (AK Party) government, and another British one speculating about him becoming "the Saddam Hussein of Turkey." Others still even suggested that perhaps Erdoğan had staged the coup attempt and is now on the warpath consumed with hatred and revenge against his latter-day bogeyman, the self-exiled Fethullah Gülen, whom he has blamed for the power grab through the coup attempt.

This frenzy of negativity will no doubt continue as more details of the alleged plotters and their political masters emerge. It felt as if Erdoğan and Turkish democracy, and not the coup plotters, were on trial.

Erdoğan is no saint. I do not think there is any politician in the world that can claim that accolade. He has a guttural sense of democracy and perhaps society, which is tempered by a worldview deeply steeped in his faith. His robustly confident style is endearing to his supporters and more akin to an ageing rock star pestered inter alia by hijab-clad admirers chasing a selfie. To his detractors he is anathema, authoritarian and a danger to democratic society.

Of course if you are a secular fundamentalist - yes, secular people very often are fundamentalists - then the likes of Erdoğan will always be a thorn in your side.

Turkish democracy's problem over the last four decades has indeed been the failure of these two strands in Turkish politics and civic culture to come to terms with each other in a peaceful discourse of coexistence. On the contrary, however, they not only constantly undermine each other and more importantly the political and societal culture in the country, thus creating that climate of unease that detractors of democracy so rudely tried to capitalize on the night of July 15.

The truth is that there should be room for both in a democracy. I have heard pundits repeatedly stress over the last few days that democracy is not only about winning elections, referring to the fact that Erdoğan has probably been one of the most successful politician in the world in winning general elections - often by landslide - and referenda.

Of course, a liberal democracy involves much more complex aspects than merely winning elections. As a student of government at the London School of Economics in the 1980s, the criteria of liberal democracy were drilled into us - free and fair elections, checks and balances, independent judiciary, freedom of opinion, protection of minorities, habeas corpus and so on.

Yes, Turkish democracy has its deficits like any other. Just look at the U.S. when George W. Bush had to rely on the Supreme Court to win his first term as president because of a dispute over the vote in Florida, whose electoral commissioner was far from impartial because she was a political appointee by his brother who was the governor. The list is endless all over the world.

The truth is that the metropolitan elites in Ankara, Istanbul and İzmir, steeped in their secular obsession, have and will never come to terms with a democratic polity based on any religious tradition, especially Islam, which they deem backward and a throwback to the Ottoman Empire. That in itself is a very undemocratic impulse.

Not surprisingly, the bogeyman of the Turkish right and left has always been Islam. That is why there was the repeated spectacle of the political right and left unwittingly colluding to support the military in its repression of anything smacking of a religious nature actual or perceived. This, in a way, added fuel to the fire because the military thought it could get away with the cycles of coups in 1960, 1971 and 1980 because of the divided and weak society that Turkey was.

The Turkish right and left are neither intellectually nor physically comfortable with their history or their heritage because they have an obsessive near atavistic drive to be more Western than the West, more European than the Europeans and more modern than any of their Western peers.

Here, the legacy of Mustafa Kemal Atatürk is just as much in play given that he is the country's original role model of an authoritarian leader with a strong grip in controlling the state from a centrally planned economy in which the state owned hotels, banks and even restaurants to social mores.

Atatürk's revolution to modernize Turkey was bold and perhaps needed. But in his efforts he turned secularism into a new religion that deprived millions of ordinary Turks of their rightful heritage - the alphabet was changed to Latin letters depriving future generations from researching their own history, and eulogizing the best of the Ottoman Empire became taboo. The sheer spectacle of there being more Western academics conversant in Ottoman than Turks, and the droves of them wanting access to the treasure trove of Ottoman archives, which, ironically, the Turkish military had been reluctant to grant in their heyday, speaks volumes.

The Turkish military conjured the concept of "guided democracy" reflecting once again the paternalism of Kemalist ideology, and even tolerated elections and selected political parties as long as they were acceptable to the generals and operated within the rules of a guided democracy.

If you look at statement from Western experts, they always laud Atatürk as "the great modernizer" of Turkey, but never as a democrat, which perhaps betrays their self-interest and the contradictions at the core of Turkish society.

Such are the sordid shenanigans of modern Turkey's painstaking evolution toward democracy - an evolution that even after 36 years of democratic processes starting with 1980 as year zero is still very much a work in progress.

Turkish generals in the past used to espouse the mantra that they were the guardians of the constitution. In reality, they tend to have a flawed concept of democracy. This is a fundamental misconception of the military mindset and betrays that misunderstanding of the ethos of a liberal democracy.

In a functioning democracy, it is the people, through parliamentary representation, who are the protectors of the constitution and parliament. The job of the generals is the defense of the country and its people.

The military can never be the protector of a constitution or democracy. If they believe they are, then any such country will be going down a slippery slope to military rule, whether benign or brutal. The notion of a good coup, like a benevolent dictator, is fundamentally flawed and morally ambivalent.

Amidst this morass there has been some flicker of hope for Turkish democracy, especially the way the opposition parties, the secular media and other sections of society rallied to condemn the attempted coup. That in itself is a potential sea change in Turkish politics.

The requirement is for all - government and opposition, as one of the defining trends in Turkish democracy has been perennially weak opposition, and key sectors of society to rise to the occasion and consolidate democracy from the ashes of the foiled coup.

This requires a consensus approach to deconstruct the foiled coup attempt and the mindset behind it. It would be an act of great courage for Erdoğan to invite the opposition leaders to participate in this process, because they, too, have a stake in the future.

Above all, the rule of law and due process must prevail, which no witch hunt can mitigate. And if Erdoğan wants to go that extra mile, how better to safeguard his democratic credentials than to support the idea of a cap of two terms for a future president or prime minister?

The last thing Turks would want is for a new dawn for Turkish democracy to dissipate into yet another a false dawn.