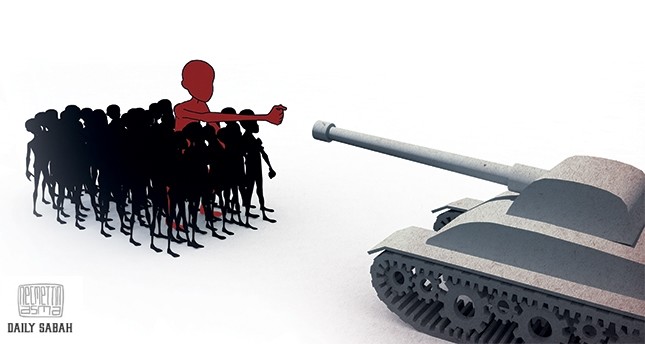 In the literature, one of the key concepts used to explain Turkish politics is the "wisdom of government" or the "state mind." The wisdom of government refers to state authority and skills that have historically managed the country. However, on the night of July 15, Turkey, which boasts about its historical background and wise management skills, faced a major crisis. Things that raise doubts for citizens but are very well-known by the government started to become apparent one by one.

First of all, the military, which considers itself as the defender of modernization and the representative of the state mind, irreparably damaged its reputation. The emergence of a junta should be seen as a result of this damage. Observing the chain of command being so severely wounded posed a big question for the military, which fights terrorism both inside and beyond the country's borders. Many generals who were thrown out because of membership in a terrorist organization served on the borders, which increases the severity of these events.

Secondly, the government and the military, which have struggled with the Gülen Movement, also referred to as the "parallel state structure" (PDY) since Dec. 17 and Dec. 25, 2013, did not cleanse the military. This shows the depth of the problems in the management process. The military could not be cleansed because it justifies that its command level has been fighting the PKK and DAESH. Also, the missing command chain has led to these results. In the failed Gülenist Terror Organization (FETÖ) coup attempt, Turkey experienced a serious weakness of intelligence, as President Recep Tayyip Erdoğan has said.

Primarily, the PDY cannot be disclosed, although the state has been fighting with it for long time. Also, the government failed to obtain news of the coup attempt and to cut off the front by confirming the information that was reported all day. All this shows that the intelligence network of the state is nonfunctional. Citizens learned of the coup attempt at 10 p.m. on July 15, but Interior Minister Efkan Ala, who has the military and police intelligence under his purview learned of the attempt at about 11 p.m. after his plane landed in Ankara. This shows that the PDY had emasculated governmental institutions.

In terms of the democratic system, the separation of powers is one of the key issues. While judges act in accordance with the principle of judicial independence and impartiality, rulers decide according to rule of law, which is established by the legislature. This is the most essential feature of the rule of law. The separation of powers in Turkey received a deep wound after judicial bodies, especially critical positions, were assumed by the members of FETÖ.

Dimming of evidence, fabrication, setting up of judges and prosecutors and the appointment of judges who are from the PDY to critical positions undermined the rule of law and the political content of lawsuits has been invoiced to the political powers. While cases were rendered dysfunctional by using fabricated evidence, many innocent people were sent to prison as a result of the stranglehold of the organization, which has been discredited in the public eye. It is known that the PDY was organized in court with full force for a long time, and has used its power against the elected government since the Dec. 17 and Dec. 25 corruption investigations. At Ankara's Akıncılar Air Base on the morning of July 16, an academic in theology, who was claimed to be the one of FETÖ's executives, was released by the court in front of everyone's eyes. This is the latest activism from the PDY. From judges to the bureaucracy, from security intelligence to the Turkish Armed Forces (TSK) and the police, the government has become dysfunctional due to the line with the PDY's nepotism and it has lost the most basic of functions. The country has lost all inner control mechanisms. Qualified people were stopped before entering the bureaucracy or after getting in they had been rendered dysfunctional by FETÖ/PDY. The state needs to overcome this crisis and restructure itself using human sources, organizations and state wisdom. Declaring the state of emergency and enforcing emergency law facilitate crisis management. Giving value to the law and justice, the state within the diseased structure should be cleansed and it is necessary to proceed with a sturdy structure. To be converted to the opportunity of the coup attempt can be possible with the construction of the state of mind.

The rise of the nationWhen people understood that a coup attempt was happening on the evening of July 15, everyone looked for Erdoğan. From the closest observers of Turkish politics to the uninitiated, everyone knows that Erdoğanis the center of the political struggle of the PDY. The implied political struggle that began previously became clear along with the Dec. 17 and Dec. 25 investigations and then it resurfaced. Therefore, Erdoğan's elimination of the presence of FETÖ/PDY was a move that will produce direct and accurate results. However, Erdoğan smashed this move. Erdoğan was aware of the political power of society and demanded resistance, urging the people to take to the streets. Inspired by the Ottoman Empire, in Turkey's political system, there is a tradition that society follows its leaders. This attitude has resulted in the nonexistence of political activism. For the people in Turkey, a democratic response can be shown in elections. However, on the evening of July 15, this tradition of being a subject of the state and its administrator was the democratic struggle. People went to the streets and put their hearts into the soldiers in front of tanks. While doing this, they were not violent. All this was nothing more than the defense of democracy. In Turkey, although coup makers have designed the pulse periodically in democratic politics since May 27, social objection has never been higher. On the contrary, previous coups had gained legitimacy by finding a social base of support. While doing this, the ideological dimension given to the coups has been an important factor. The July 15 attempt has turned what was happening upside down. The junta, which does not represent society and was built illegally against the state, has been challenged by Erdoğan, who represents the state and the elected government and all political parties. Media showed responses, too, throughout the night of the coup attempt and its aftermath. This played an important role in warding off the coup. Above all else, society maintained the continuity of the government and protected their democracy by putting out their hearts for the sake of the future. The coup attempts in the past suspended politics to hold early elections in the shortest time possible. They opened the political field by establishing a new constitution. On July 15, the bombing of Parliament means the bombing of each vote and each ballot box. Also, politics was asked to be dysfunctional by military intervention which tried to eliminate Parliament's function. Today, in retrospect, this group, which does not have a social base hides its identity and lives in a characterless way, tried to condemn Turkey to junta fascism. Turkey turned an important page in its history of democracy with resistance and wisdom.

The construction of the state

After the coup attempt was repelled, government officials, especially Erdoğan, called the people to the streets for the "democracy watch." This is very valuable because it confirms the gravity of the situation. The organization has harmed the state for over 40 years and it does not seem it will be easy to repair during state of emergency and for many years to come. Besides, gradual change, which cannot be done under normal circumstances, triggered a radical transformation with the coup attempt.

Turkish politics and politicians are aware of their problems. There is a need for constitutional change in Turkey at the basic level. At the center of this need is the amorphous case that the government has played a role. First of all, the Constitution and the form of government must be changed. Especially due to the case with political content, there is a judicial order that was subjected to erosion. Secondly, the judiciary was destroyed by FETÖ and should be subjected to reform, and the confidence of citizens in the rule of law needs to be established. The third issue is the soldier problem we saw in the coup attempt. Despite all the tribulations in Turkey, the issue of militarism could not be faced. Today, the issue of militarism should be addressed. This issue constitutes a very central part of the context of the rule of law and civil politics, the values of a democratic society, counterterrorism and the Kurdish issue. In spite of all the reality problems, the support the opposition has given should not be invalidated. Unfortunately, in the breakdown of the constitutional process, ruptures in political relations have played an important role. After that, our main concern is the construction of the law of a sovereign state. Justice Minister Bekir Bozdağ's speech in Parliament summarized this status: "In the past, our friends informed us about the organization, but we did not believe them. After Dec. 17, we explained their structure, but you did not believe us. After that, if we continue to listen to each other and control the information, I believe that such organizations will never be a threat or danger to the country."