Is Pakistan aware of the Gülenist threat? 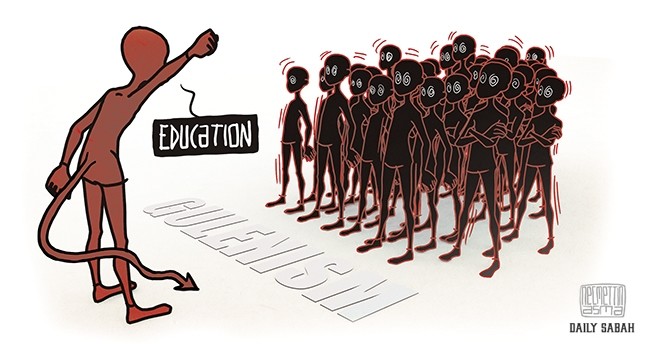 Gülen schools are like a Trojan horse and are a virus. By using these schools as a means, they settle into countries in the disguise of innocence, they infiltrate through the students they educate the most confidential institutions and seize power of any institution within 20 years to 30 years

That is how I feel when it comes to Pakistan, Karachi, Lahore and Islamabad. The second country that I feel at home on the earth other than Turkey is Pakistan. This does not only arise from our historical links with Pakistan, but also from the fact that it is a country where I proudly studied and lived for many years.

I did not break with Pakistan even after I returned to Turkey. I missed Pakistan like I missed my homeland. While I was wandering on the streets of Istanbul and Ankara, I could not help stopping any Pakistani I came across and greeting them by saying: "Ke haal hai."

At each and every moment of my life in Turkey, I fulfilled my longing for Pakistan either by shaking hands with my Pakistani brothers I ran across or by dolefully listening to Nusret Fateh Ali Khan's song "Kise Da Yaar Na Vichre."

The late Moin Akhtar's TV show "Moaf Ki Jayega" on PTV, on which I was a guest, was the first TV show I had ever made and been a guest on. I still watch it on YouTube occasionally and reminisce about it dolefully.

I am assertive about my love of and loyalty to Pakistan to the same extent that any Pakistani citizen is.

I was on cloud nine upon a phone call from Pakistan after the coup attempt in Turkey on July 15 by Gülenist soldiers who had leached into the Turkish Armed Forces (TSK). My friend on the phone said that a massive crowd in Karachi had gotten together to support Turkey and President Recep Tayyip Erdoğan, and he asked me if I could get on the phone and address to the crowd. I said I would with pleasure and telephonically addressed my brothers in Karachi who had fellow feelings for Turkey.

On July 15, 2016, Turkey had an incredible, horrible night. We could not believe what happened, and it is still hard to believe.

Fethullah Gülen and his community, who opened schools and private tutoring schools from the 1980s under the guise of educating conservative students, reached into and took root in a large number of important institutions in Turkey such as the judiciary, police department and TSK over a period of 20 years to 30 years.

Gülenist judges, prosecutors and police officers collaborated and wanted to disrupt the government by carrying out an operation against the Erdoğan government on Dec. 17, 2013, under the guise of fighting corruption. However, they failed and Turkish voters elected Erdoğan president with an overwhelming 52 percent of the vote.

The main purpose was to disrupt Turkey, which had been continuously booming, developing, gaining economic and political independence and which reached a status to be able to provide foreign aid of $8 billion, having paid back all its debt to the International Monetary Fund (IMF). The purpose was also to stop Erdoğan, who criticized the global system based on benefits and who struggled for change and challenged it all by stating: "The world is bigger than five."

Having failed in their operations on Dec. 17, 2013, they attempted to obscure Turkey deeply and murderErdoğan just like the suicide attack on July 15, 2016 by galvanizing into action their coconspirators that in the TSK. Erdoğan luckily got away from the attempted assassination by only 15 minutes. The Parliament building was bombed. My wife, my children and I were fighting for our lives under the airstrike of fighter jets at 2:42 a.m. Turks who took to the streets despite the attacks of helicopters and tanks, laid claim to democracy, which resulted in 245 deaths.

Fethullah Gülen is a so-called imam who finished primary school externally, made a circle of people through some sort of hypnotic methods and exploiting religion and he was brought under the control of secret services. Under the directorship and coordination of these secret services, Gülen established a global network of intelligence under the guise of schools and education by opening schools in many countries from Africa to Europe and Asia. In every country he visited, he established intimacy with seniors of that country, collected intelligence and leaked them to the necessary authorities.

Gülen schools are like a Trojan horse and are a virus. By using these schools as a means, they settle into countries in the disguise of innocence, they infiltrate with the students they educate into the most confidential institutions and seize power of any institution within 20 years to 30 years.

As a postmodern method of war, global forces take control of and inactivate the target countries through mechanisms like Gülen that they create within that country rather than resorting to conventional war. In this way, the war they start becomes more predictable, cost-efficient and lossless.

May of our Pakistani friends know it very well that Gülen schools are not there for the good of Pakistani children. If Pakistan does not want to undergo the same distress in the next 15 years to 20 years with the Pakistani judiciary, police and military, and if it does not want the parliament building to be bombed, it needs to take precautions before it is too late.

Our bitter experiences must be a lesson for Pakistan. I love you, Pakistan, I love you, Karachi, Lahore, Islamabad and Multan.