Turkey between Russia and the West 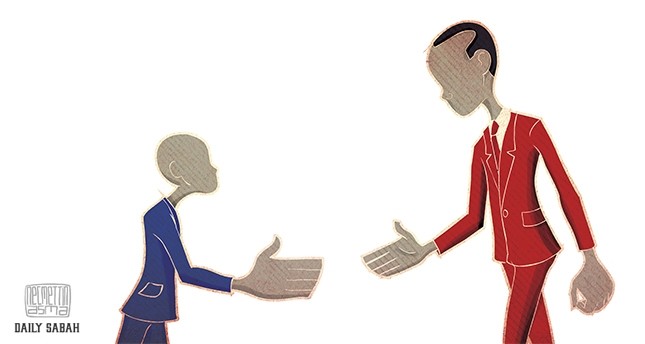 Russia is a very important strategic partner for Turkey and will continue to be in regard to Turkey's multifaceted global foreign policy strategy. Therefore, there is no need to worry about the possibility of a Turkish strategic departure from the West

When I saw the pleasure and happiness in the Turkish press in the aftermath of the Erdoğan-Putin Summit on Aug. 9 in St. Petersburg, I understood that the feeling of excitement and happiness among the Turkish delegation was not only because of the improvements in bilateral economic relations, which constitute the bulk of the two countries' bilateral relations, but also, it seems, because Turkey was enjoying the strong support from Russia and Vladimir Putin that it hasn't received from their Western allies since the insidious coup attempt by the Gülenist Terror Group (FETÖ) that appalled the Turkish nation. According to recent polls, it is now the common belief of the Turkish people that some Western intelligent organizations might have even been behind the coup attempt. Of course, nobody so far has been able to submit any concrete evidence proving a direct relation between the American or European governments and the vicious plot, but the American and European media coverage, with some exceptions of course, has not correctly reflected what happened in Turkey.

Instead, the western media have articulated the plot attempt in an ambiguous manner and, regrettably, not taken a position against the attempt, thereby standing with the Turkish government and nation against the putschists. For example, no American and European leader has visited Turkey to demonstrate European or American solidarity with Turkey. The Secretary General of the Council of Europe, Thorbjorn Jagland, and General Joseph Dunford, chairman of the U.S. Joint Chiefs of Staff, both came to Turkey, but the Turkish people have recently been asking the question of what would have happened if, for example, the German or French parliaments had been bombed by terrorist groups that had infiltrated their armies. The Western media coverage, in general, has fallaciously reflected the plot as a power struggle between "Islamist" circles in Turkey. This portrayal has created a sentimental distancing of the Turkish people from their Western allies. Of course, the chief suspect Fethullah Gülen's residence in the U.S. and the U.S. government's non-constructive attitude toward his extradition to Turkey have both greatly contributed to the sentimental distancing.

To be sure, I am not arguing that the recent rapprochement between Turkey and Russia is because of Turkey's feeling of disappointment with its Western friends, that would be completely erroneous, but rather that the increasingly chilly character of Turkey-American/European relations have rendered Turkey-Russia relations more precious in the eyes of the government and people. I would like to underscore some interconnected points with regards to the triangle between Turkey, Russia and the West. First, the Turkey-Russia relationship has a definite strategic character. My colleague Andrey Kortunov from the Russian International Affairs Council (RIAC) once stated that the Turkey-Russia relationship needed "strategic depth" for a more robust bilateral relationship. I believe, contrary to Kortunov's thesis, that Turkey-Russia relations are fortunate to already have "strategic depth," and because of this "depth," the crisis between the two states since Dec. 24, 2015 has not deepened very much, although some sanctions were imposed by Russia to "punish" the government, hitting mainly Turkey's tourism and fresh food sectors. However, for example, neither Turkey nor Russia decided to withdraw their ambassadors because of the crisis. The nine-month crisis was full of ambiguous decisions and actions, which demonstrated Russian confusion over Turkey. My analysis depends on the argument that both Russia and Turkey consider each other strategically very important, which has precluded a possible spillover of the crisis into a more comprehensive conflict, even including the possibility of violence. From the Russian perspective, Turkish friendship continues to keep its value in a regional and international political realm where she considers herself surrounded - not only by NATO members, which have been on alert in the aftermath of the Russian invasion of Crimea and what has happened in the eastern part of Ukraine, but also from the East when looking from a long term perspective at China's new politics towards Eurasia. A first glance at Eurasian politics suggests the possibility of a grand Russia-China alliance, which reflects a true point, to some extent, when taking into consideration the activities of the Shanghai Cooperation Organization; however, serious disharmony between these two great powers are easily seen when looking at the details of the competition between them with regard to the future of Eurasian economic and political architecture. Turkish political preferences toward Russia, particularly in the aftermath of the Crimean crisis, have proved Turkey can be a solid and reliable partner for Russia despite the serious disagreements that exist between these two neighbors. Turkey, for example, has never recognized the Russian invasion and annexation of the Crimea; but it has also not joined the sanctioning club against Russia, notwithstanding even the situation of the Crimean Tatars, the original residents of Crimea and ethnic relatives of the Turkish people.

In a similar vein, Turkey's policy preferences with regard to Russia reflect the Turks' strategic considerations vis-a-vis a changing international political landscape that encourages Turkish decision makers to pursue a more multifaceted foreign policy. However, while forging strong economic and political relations with Russia, Turkey is not, contrary to most recent analyses on the dynamics of Turkish foreign policy, playing a balancing game between the Western powers and Russia, which is practically impossible. In other words, Russia is an indispensable element of the multifaceted character of Turkish foreign policy strategy and not something to use against some "excessive" and "imprudent" demands of the Western states from Turkey. Contrary to the Cold War era, when one could talk about balancing international politics with different forms between the Western and Eastern blocs, talking about "balancing" between the West and Russia has no solid ground and is indeed irrelevant in the post-Cold War period. From Turkey's perspective, Russia holds considerable strategic significance, not just to increase Turkey's competitive power against its Western allies but also to sustain Turkey's global multifaceted foreign policy strategy, in addition to the strategic consequences of regional cooperation in connection with Eurasian politics and economy.

Characterizing the Turkey-Russia relationship as "strategic" does not mean that the bilateral relations have developed and deepened enough to solve the complicated issues and problems between the two countries. In other words, Turkey and Russia consider each other strategic partners; both states need much more diplomatic, economic or cultural exchanges to fill up the middle components between "s

trategic level" and more conventional ones to consolidate diplomatic, economic, transnational and cultural interdependence. Of course, no one can ignore the level of economic relations, including large-scale energy transit projects like "Turkish stream," however, the political or diplomatic exchanges between these two states to find a solution to complicated regional problems and develop some bilateral bodies in this regard have not been very impressive, despite the existence of the High Level Cooperation Council between the two states. Recently, after the summit, at which President Recep Tayyip Erdoğan and Russia's President Putin met, some new political platforms have been announced, such as the trilateral cooperative bodies between Turkey, Russia and Azerbaijan on the Karabakh issue. However, a sort of "let's agree to disagree" policy has been generally accepted by the two sides so far; and regional problems related to Syria and Ukraine, for example, have not been allowed to spill over into bilateral relations - until the downing of the Russian aircraft on Nov. 24. Thus, it is well understood that it is extremely difficult to isolate bilateral relations from the regional crises and therefore, new cooperative strategies are needed for a stronger strategic relationship.

When watching Turkey from the outside and observing the Turks' good cheer after the Nov. 9 summit, as well as their feelings of anger against the absence of sensitivity and solidarity among Turkeys' American and European friends against the coup attempt and the massacres that the plotters did, one might wrongly think that Turkey would change (again!) its strategic orientation from West to East. This it will not do. Russia is a very important strategic partner for Turkey and will continue to be in regard to Turkey's multifaceted global foreign policy strategy. Therefore, there is no need to worry about the possibility of a Turkish strategic departure from the West; however, I cannot say the same thing about the sentimental departure of the Turkish nation in the face of the general Western ignorance and indifference.