Making sense of the July 15 coup attempt in Turkey 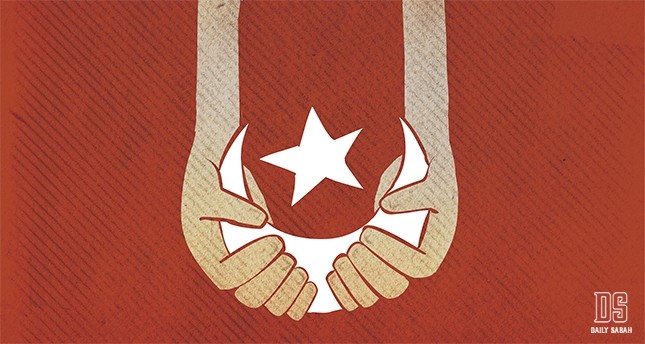 Illustration by Necmettin Asma - twitter.com/necmettinasma
by Şule Albayrak Aug 26, 2016 12:00 am

The July 15 coup attempt left behind a damaged military and public institutions, a concerned citizenship, hundreds of martyrs and thousands of wounded. But the unnamed heroes who took to the streets to resist the coup attempt gave the people of Turkey a reason to have hope for the future

Eyüp, a taxi driver in his late 20s, used to manage a local curtain store. He had recently closed his shop to learn a new trade and feed his family. On the night of July 15, he received a phone call from his father, who worked at a popular cafe in Çengelköy on the eastern bank of the Bosporus. Heavily armed soldiers leaving the military high school in Kuleli, he had heard, were killing civilians. Ignoring his father's advice to stay at home, Eyüp, a newlywed, heard Turkish President Recep Tayyip Erdoğan's call and took to the streets to resist the coup. He was shot in the leg as another bullet scraped the back of his head.

Gökhan, 24, an ironsmith who learned the trade from his father, found out about the coup attempt while he was home watching a movie online. When he got a call from a friend, he started walking toward Kısıklı, where the President resides in Istanbul, only to find out that tanks had blocked access to Bosporus Bridge. He then made his way to the occupied bridge, where his face, head and back would be covered with bullet wounds. The bridge has since been renamed "July 15 Martyrs Bridge."

Another hero, who shall remain nameless, was watching TV after work and trying to relax while her family was out of town. Upon learning about the coup attempt, she called her relatives to calm them down, prayed for continued peace and stability in Turkey and grabbed a Turkish flag on her way out. When she reached the bridge, she saw unarmed civilians get shot in the head by snipers. She rushed to the help of the wounded. It was after the coup had been thwarted that she realized her foot had been run over by a bus full of coupist soldiers.

There are millions of other similar stories featuring unnamed heroes. The story of the survivors establish that the Turkish people's active resistance against the coup orchestrated by the Gülenist Terror Group (FETÖ) operatives within the military was the most important factor behind our ability to defend democracy. The people who rushed to the streets on July 15 talk about the coup plotters who killed innocent civilians and dared bomb the Parliament like they are an occupation force from another country. An ordinary citizen who took off a coupist soldier's boots on the Bosporus Bridge and threw them away said: "I was either going to throw away the soldier or his boots. When I took his boots off, I realized that they weren't like Turkish soldiers' boots. His boots were different. Our soldiers do not wear those kind of boots."

THE SOCIOLOGY OF A COUP THWARTED

On the night of July 15, Turkey set the stage for the bloodiest coup attempt in its history. Close to 250 innocent people lost their lives, as more than 2,000 victims were forever injured. This was not the first time that the people of Turkey encountered a self-proclaimed junta. Several incidents had happened in the late Ottoman Empire. In 1960, the military overthrew a democratically elected government for the first time. Eleven years later, the commanders issued a memorandum to force the government to step down. In 1980, tanks once again rolled down the streets. Again in 1997, the military had pressured the government into collapse in what would be called a post-modern coup. Every single time, the people's reaction was limited if not non-existent. But this time was different. The people's rejection of military dictatorship proved to be a game changer. For the first time ever, ordinary citizens stood up to armed soldiers, tanks and military jets. They filled the streets, public squares and airports. They talked coupist soldiers into surrender and, where persuasion failed, risked their lives to disarm them and lied down in front of moving tanks. This drastic change in the people's attitude toward military rule calls for a detailed analysis.

First of all, it is important to keep in mind that Turkey has made consistent and rapid progress in terms of socio-economical development. According to World Bank, the country's middle class grew by 40 percent. Many of the newcomers, originally from traditional social groups, believe that religious and cultural values could be in harmony with global values. This group, which experienced political stability and economic progress, became hopeful for themselves and the country to spur growth. Against this background, the July 15 coup attempt came to be seen as a threat against their hopes and enthusiasm. By taking to the streets, they refused to be stripped of stability and their expectations.

Secondly, the high level of awareness among the people about problems in Turkey's neighborhood triggered a strong reaction against the coup. Over the past decade, they had witnessed the invasion of Afghanistan and Iraq, the post-Arab Spring chaos in the Middle East and the Syrian civil war. Day in and day out, many ordinary citizens came in contact with some of the 3 million Syrian and Iraqi refugees that the country hosts and witnessed their difficulties. In recent months, the PKK's return to violence had also raised awareness about regional and global crises among the Turkish people. Many people who took to the streets on July 15 said the same thing: "Syrians and Iraqi have Turkey. We don't have anywhere else to go. We must protect our country."

Thirdly, it is important to acknowledge the shrinking gap between the Republic's values and popular sentiments in recent years. For decades, the Republican elite imposed on the people secularism, elitism and Westernism as part of an authoritarian modernization project to alienate the masses. Even though politicians like the late Turgut Özal, who was active in the 1980s and the early 1990s, tried to bridge the gap, it took a stronger leader, President Erdoğan, to make concrete progress. Under Erdoğan's leadership, the government replaced the idea of authoritarian secularism with democratic secularism to promote bottom-up change and make room for alternative modernities that reflect diverse historical and socio-cultural experiences. As such, for the first time in Turkey's history, the polarization between the government and the citizens came to an end. At the same time, the government implemented social policies that helped the authorities reach out to a larger part of society. It was such a large-scale transformation that made ordinary people consider it their moral duty to defend the country's democracy and government.

A participant at the democracy watch events, which continued for weeks after the coup attempt, said it best: "Every night, we wake up to make sure that the state is alright - like you would check on a baby." The people's response to the coup attempt also proved wrong many experts who claimed that Turkey's conservatives had not fully embraced the Republic's values. The fact that many anti-coup activists wore the headscarf, the hijab, had long beards or religious headgears is proof that more and more people are rallying behind democratic politics as the government moves away from the traditional authoritarian modernism and the nation makes its peace with the authorities.Moreover, President Erdoğan's leadership was an important factor behind the coup attempt's failure. Having survived an assassination attempt, the Turkish president challenged the coup by placing his life at risk and encouraged hundreds of thousands of people to resist the coup plotters with no doubt in their hearts. Over the years, Erdoğan has emerged as one of the most significant figures in Turkish politics and proved capable of using his charisma to mobilize the masses. Convinced of his sincerity and honesty, millions have rallied behind him despite a series of anti-democratic attacks. Meanwhile, the president's opponents, who had been under the influence of "Erdoganophobia" for some time, snapped out of the hypnosis to side with democracy against what they considered to be an attack on the Republic, not just Erdoğan himself. The fact that many supporters of the Nationalist Movement Party (MHP) had no problem mixing their own symbols with pro-Erdoğan chants during the democracy watch events was telling.

Over the decades, each successful military coup had some level of public support. On July 15, hardly anyone except the coup plotters and loyal supporters of Fethullah Gülen was sympathetic to the power grab. The coup attempt, which appears to have been a violation of the chain of command, was backed by no religious, ethnic or cultural group. At a time when critics would complain about growing polarization, people from all walks of life united against the would-be junta to make it clear that there was no alternative to democracy in the political arena. The fact that nearly 5 million people from various political parties attended an event hosted by the president in Istanbul on Aug. 7 marked a watershed moment in Turkey's history. The left and the right, Alevis and Sunnis, Kurds and Turkey, Erdoğan supporters and opponents sent a message to the world that democracy was non-negotiable.

The aftermath of the July 15 coup attempt

The July 15 coup attempt left behind a damaged military and public institutions, a concerned citizenship, hundreds of martyrs and thousands of wounded. But the unnamed heroes who took to the streets to resist the coup attempt gave the people of Turkey a reason to have hope for the future. Today, there is a sense of unity between the state and the nation, various social groups and political parties. There is even a renewed hope that we can draft a new, civilian constitution together.

A month has passed since the coup attempt and Western governments, which love to talk about Turkish democracy, still refuse to understand what happened. Having been reluctant to express their solidarity with the Turkish people, their leaders have had no problem threatening and hiding their double standards behind the human rights discourse - which not only hurts democracy but also puts strains on their relations with Turkey.

The time has come for both Turkey and the West to take stock. Today, they are both being put to test. Let's see whether Western leaders can learn to respect the Turkish people's democratic choices.