Revealed: The Clintons' appalling master plan for the Middle East 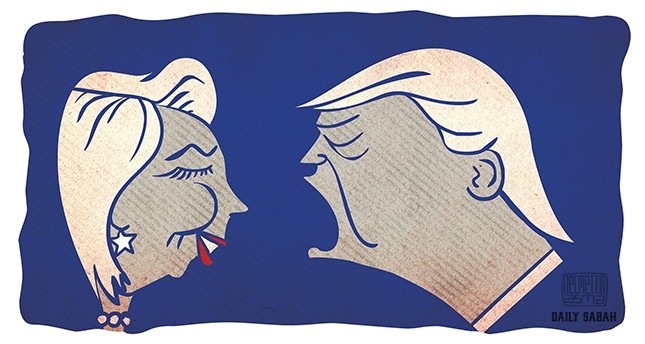 Illustration by Necmettin Asma - twitter.com/necmettinasma
by Martin Jay Aug 29, 2016 12:00 am

The Clintons' own cash monster is heading this way. Here's what a deal with the Middle East to feed it will look like, who will pay for it, who will profit - and why Hilary Clinton's bid for president will only turn more Muslims against one another

Something remarkable happened in mid August that didn't make it to media outlets in the Middle East but might well have an impact on the region. Maverick U.S. businessman and media maestro Steve Bannon was appointed by Donald Trump as his new campaign manager with barely 11 weeks left in the race for the White House.

Bannon was the proprietor and editor in chief of the so-called right wing website Breibart, which has shaken up U.S. politics formidably and earned him a reputation as a "street fighter" among the hacks in Washington.

He's got his work cut out though, as with only a few weeks left, he has to close the gap with Hilary Clinton and refocus Trump's rather clumsy messaging. And the Middle East better pray that he succeeds, as if there's anything that keeps me from sleeping at night, it's the thought of Clinton and her naked lust for wealth, which could throw this region and its troubles out of the frying pan and into the fire.

To sum up their differences, Clinton stands for improving relations with both Saudi Arabia and Israel and putting Iran back into the deep freeze - a sort of status quo before U.S. President Barack Obama threw the baby out with the bathwater. Curiously, you might have thought that she has stolen Trump's own blueprint. But in fact, his own ideas differ quite considerably. His policy will be to keep cordial, but distant relations with Riyadh and Iran but to take away Israel's strength in the region. It might appear illogical but Trump has made his contempt for the Israeli lobby in Washington quite public, and some are wondering if, as President, he might even reduce the military subsidies to Israel, which stand at around $3.7 billion a year and are due to be renegotiated in 2017. If he were to do that, it might stop Israel yapping on about bombing Lebanon, which because of the special relationship between Israel and the U.S., is not allowed to even have an air force to challenge Israel's jets that regularly buzz this tiny country.

There's a lot to consider. But given that Clinton has repeatedly said that she would consider using U.S. military means in Syria - in other words, start a new cold war, proxy or not, with Russia - Trump seems like a cool player. He appears to have America's best interests at heart, whereas Clinton seems to have her own personal interests guiding her in the region.

Turkey and other powerful countries in the region should take note. Trump is definitely the region's chosen U.S. president, as only he appears to want to keep relations with the two chief super powers, despite his anti Iran campaigns. We'll have to assume that some of that was playing to the voters, as was the anti Muslim statements, which he clearly now regrets. He's not as polished and measured as Clinton, but that brutal honesty, without the contrite theater of media trainers in the wings, has proved to be popular.

But Clinton is going to be Saudi Arabia's choice, which means all of the Gulf and other North African Arab outposts like Morocco, whose king Mohamed VI earlier had donated a pithy $1 million to her campaign in 2008. In other words, she is the chosen one of the Arabs, but for all the wrong reasons.

Giving the Saudis their mojo back and bringing the Israelis back in from the cold can only lead to more war, which will throw the region back into greater turmoil. And who will pay for it all? The Gulf nations who so valiantly began bombing DAESH in Syria last year soon began to realize that the American-bought F-16s needed refits and, of course, constant supplying with rockets. The bills soon add up, and the cash just isn't there now.

Perhaps the Clintons have a master plan to fund such a war? They seem to have a knack for both finding colossal sums of money from hundreds of despots around the world, but then also making it disappear. According to a documentary produced by Bannon called "Clinton Cash," the Clinton's own foundation has received over $2 billion in recent years, of which only 10 percent was ploughed back into charities that it supports.

The documentary is a shocking account of how the Clintons garner financial support from leaders of poor countries, often rich in mineral or energy deposits, then bring in their own cavalcade of cronies from the states to then make billions cleaning up on contracts. There seems to be no limit to whom they will approach with this business model, but African leaders like Paul Kagame, drenched in blood from atrocities in both Rwanda and Congo, seem fair game. According to the documentary, wide-scale graft is also part and parcel of the Clintons even when they descend on Haiti's earthquake victims. Overnight a group of U.S. companies that all supported the Clintons' foundation moved in, under the approval of U.S. Secretary of State Hilary Clinton, and made billions out of the calamity, much to the chagrin of the locals who complained that U.S. aid money didn't seem to be reaching the victims' areas. The Clintons cannot help but play both roles - one of the state and the other of fat cat corporate profiteer - without missing a heartbeat it seems. It's a line they appear to have crossed hundreds of times as both they and their organization, gets richer and richer.

It works very simply like this. A group of business people pours modest amounts (low millions) of cash into the Clinton Foundation. They then "sponsor" - sometimes to the tune of up to half a million dollars a pop - a speech by Bill Clinton in a given country where they wish to invest on a fast buck scale where local companies are destroyed in the scramble, often in Africa. Then, the despot of the country is convinced that if he were to allow those U.S. companies to gain market advantages and to move in and swoop quick profits, then no doubt he would also be highly considered and praised - and perhaps rewarded as well - as part of the murky deal? Is this what happened with Kagame? How else could he still be protected against war crimes and given honorary titles by the Clintons?

But it is not just in Africa where Hilary's decisions in government have lined the pockets of her rich friends and supporters. An oil pipeline deal stretching across America, which she was expected to oppose on environmental grounds, was magically approved by her once a banking group in Canada linked to the oil firm sponsored 10 speeches of Bill's, which reaped $2 million. Amazingly, few U.S. journalists saw the conflict of interest when the pipeline was finally given the go ahead in 2015.

Is this absurdly simplistic formula for graft going to become the business model for all of the Arab world's leaders? And can we expect it to come here after November? Is that all that Turkey needs to do to secure the extradition of Gülen? Sponsor Bill to give a speech on human rights or freedom of speech in the developing world or any similar such nonsense. Sadly, I fear so. Can human rights violations be magically airbrushed away in Arab countries by leaders sponsoring Bill's speeches? Can Iran abuse the terms of its no-nukes program by paying off the Clintons?

If Clinton wins the race for the White House, I have no doubt she will "restore" the previous might that Saudi Arabia once wielded. But with all time low oil prices, she will have to come up with a master plan for Riyadh to pay for it. And here's how it will work. Washington will convince Riyadh that they dramatically need to step up their defense spending both in Syria - and for the "new" threat of oil rich Iran (beautifully created by Obama, her dear friend). Riyadh will argue that they haven't the money for a bold plan and that if such a war were planned, they would expect it to be led by American soldiers. Clinton's people will reply: "No worries, they will come. We guarantee it." And as for the little matter of how the Saudis funnel billions back to U.S. arms makers? Here's the genius. Clinton will lobby the World Bank and the IMF to lend the Saudis money for state building, civil servants salaries, police, education and infrastructure in return for a huge slice of that 500 billion in cash sitting in the central bank, which will be used for a massive spending spree with U.S. firms, with no doubt a few score millions added to the Clinton foundation for those poor countries in Africa, which, er, Bill cares a lot about. Apparently.

The key to the deal happening will be U.S. companies cleaning up on contracts in GCC countries and getting preferential access to markets. It's not difficult working out which companies will get the deals. They are already big sponsors of the Clintons' foundation. Perhaps an oil pipeline deal from Qatar, which was put on hold because of the Syrian war, will be enough to stoke the war profiteers in Clinton's cash-obsessed cadre.

We should not be naive about what drives the Clintons. Cash. If even half of what Bannon's film claims to be fact, the Americans are going to show the world how truly corrupt it is as a nation, a super power and a business. The Clintons' foundation and it slush funds made Hilary Clinton. No question. She and her husband must have planned it from the very beginning as a clever way of getting her into the White House. And remarkably, Obama's support for her makes more and more sense each day, as he too will no doubt duplicate it and clamor for immortality. My guess is that Obama is going to replace Bill as the speech bagman.