Euphrates Shield and its ramifications on Turkey-US relations 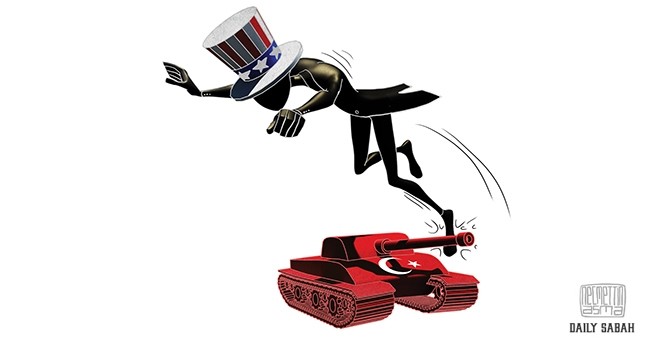 Illustration by Necmettin Asma - twitter.com/necmettinasma
by Ahmed Al-Burai Sep 02, 2016 12:00 am

The Syrian war is an increasingly complicated, internationalized multi-sided battlefield and if a regional power like Turkey is marginalized and its interests as well as worries are not taken seriously, alliances and coalitions will never reach their targets

When Turkish warplanes, armored tanks and Special Forces went into Syrian territory to cleanse the northern stretch of Syria from the blood-soaked cult of DAESH, the Obama administration hailed the Turkish military operation, describing it as an upshot of the ongoing U.S.-Turkish cooperation.

However, when events on the ground started to unfold and mainstream media outlets on both sides started to equally leak and report various statements by Turkish and American officials, it was perceptibly understood that the two allies weren't reading from the same page on the offensive and the presumed coordination was not practically as authentic as their public declarations signify.

Previously, the timing of the operation was a rather vehement message. On Aug. 24, 2016 at around 4 a.m. Syrian moderates backed by Turkish ground forces launched the code-named Euphrates Shield operation to take Jarablus from DAESH. Turkey's forces embarked on the incursion just hours before the arrival of U.S. Vice President Joe Biden.

During that visit, Biden strived to maintain the sustainability of the impeccable strategic relations between Washington and Ankara. He issued a decidedly clear warning to his country's allies, troops of the Syrian Democratic Forces (SDF), dominated by the pro-Kurdish party Democratic Union Party (PYD) and it military wing People's Protection Units (YPG), to withdraw to the east of the Euphrates River and immediately comply with Turkey's demands. However, acts betrayed words; YPG elements didn't conform to the calls of their American backers and they carried out a host of assaults against Turkish troops positioned on the outskirts of Jarablus.

It's well well-known that the Obama administration has dispatched nearly 250 Special Forces to reinforce another smaller group orchestrating the Pentagon's intelligence and training services in northeastern Syria. The acknowledged mission of these forces is to counter DAESH and train moderates to meet that objective. The forces have basically been militarily offering Kurdish militias logistics and training, even escorting them on the front lines, such as in the recent battle for Manbij.

The United States' blatant pretext is overtly that pro-Kurdish militias have proven to be the fiercest and most effective combatants in the fight to push back DAESH affiliates. They also claim that if Turkey wanted to undertake a serious military offensive to eradicate the threat of DAESH, it should have taken such a step years ago, simply because DAESH has been expanding in the vicinity for years.

Obama's administration, by deliberately turning a blind eye on the palpable agenda of the pro-PKK militias, intentionally and utterly disregarded Turkey's allergy to the creation of a hostile mini-state on its borders. A statelet would constitute a safe haven to outlawed terrorist PKK fighters who share common interests and ideologies with their Syrian offshoot.

Correspondingly, Turkey is worried about the exclusionary policy of the pro-PKK groups. It's evident that the YPG has a validated track record of compulsorily displacing non-Kurds, which is a clear sign that they are not keen on fighting DAESH but rather on attaining an autonomous entity that exclude other ethnicities.

For Turkey, developments on the ground have drastically changed and it doesn't have to tolerate American negligence or deliberate hesitation to take its worries and concerns seriously.

There have been years of futile negotiations with the western powers to establish a safe zone, or at least a no-fly zone in northern Syria. Turkey constantly reiterated its willingness not only to eradicate DAESH but also to end up all sorts of terror including the state terror of Bashar Assad. Turkey has persistently called upon an international coalition that would lead a transitional phase to end the suffering of the civilians and displaced refugees.

Unfortunately, all these demands, requests and negotiations had come to a deadlock. Alternatively the government decided to work on a Plan B and they've already taken the initiative by providing dynamic support and professional training to moderate factions to fight both militants from DAESH and radicals from the Syrian Democratic Forces (SDF).

It would be feasible to claim that the United States had been informed about the decision in advance but they never expected the bold move to be taken unilaterally, and that was what perplexed their official statements and reactions.

Pentagon spokesman Peter Cook, who hailed the offensive, recently said that, "We want to make it clear that Washington finds these clashes unacceptable and they are a source of deep concern." Similarly, Brett McGurk, Obama's special envoy for the global coalition to counter DAESH, stated that "the United States was not involved in these activities, they were not coordinated with U.S. forces and we do not support them."

In return, Turkish officials slammed these proclamations and labeled them unacceptable. Turkey, after the coup attempt, seems to be more empowered and enthused to take forward courageous moves.

Until last month's foiled coup attempt, factions of the Turkish military who participated in the botched coup attempt were orchestrating schemes to negatively affect Turkey's decisions and initiations toward the Syrian conflict in a number of turning points on the timescale of the ongoing Syrian crisis.

Recently, Ankara has ostensibly recalibrated its policy vis-a-vis Russia and Iran, moving to closer cooperation with Tehran and Moscow after its rapprochement with Russia and that would infuriate Washington and exacerbate a layer of tension to the already strained relations that followed the Turkish offensive. The purported Turkish military operation is deepening animosities between major U.S.-backed groups of the Free Syrian Army factions and the Syrian Democratic Forces.

Undoubtedly, Turkey's military operation will open the hornet's nest. The offensive genuinely threatens mutual relations between Turkey and the U.S. It also will demonstrate the inaction and paralysis of the United States to coordinate the array of various militias, categorized by their ethnic and territorial divisions that hold completely different or even contradictory agendas.

The Syrian war is an increasingly complicated, internationalized multisided battlefield and if a regional power like Turkey is marginalized and its interests as well as worries are not taken seriously, alliances and coalitions will never reach their targets. Turkey has proved to be a key player that has a real influential role that could help reach a compromise if it's taken seriously and its recent move will forcibly impose its agenda on the table of other players.