Turkey’s geopolitical rebalancing: An offshoot of the failed coup 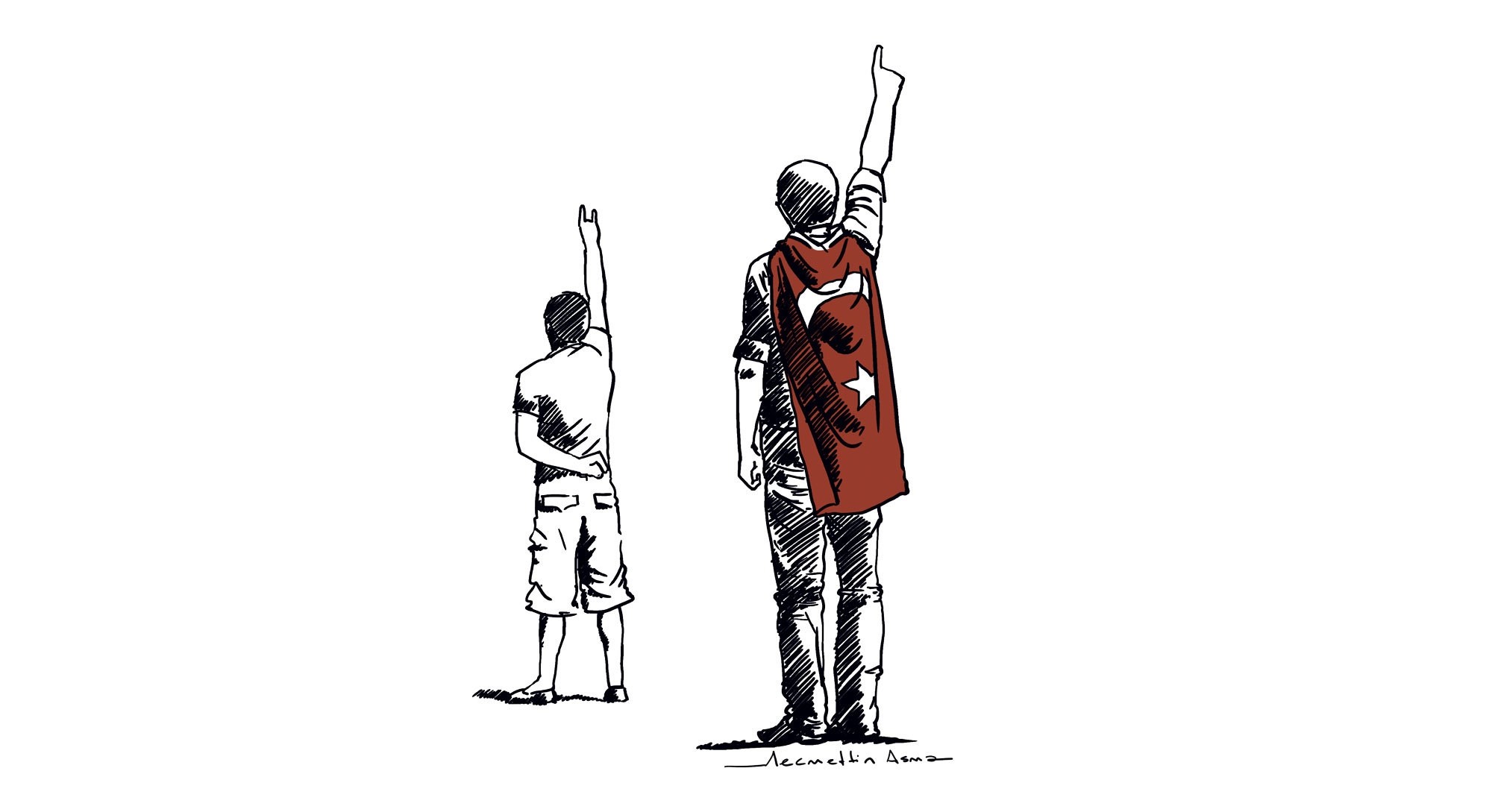 Turkey will try to adjust itself in a way where it is not seen against either the Western bloc or the power centers led by Russia and China. It will also be friendly toward other regional groups and powers in Asia and Africa

On July 15, a group of renegades within the Turkish Armed Forces (TSK) announced that they had staged a military coup and assumed control of the country. Their euphoric claim however lasted only a few hours as people took to the streets to defend their democracy and constitutional order.

President Recep Tayyip Erdoğan, with the help of brave citizens, the media, police force, national intelligence and largely loyal armed forces, thwarted the coup. In the aftermath of the failed coup attempt, a major geopolitical rebalancing is in the making.

Turkey during the last few decades has been deeply embedded in the U.S.-NATO-EU axis for security and economic reasons, and it is improbable to expect a sudden shift in its existing ties with the Western bloc. Yet the ramifications of the failed coup attempt will certainly pave the way for Turkey's gradual swing toward non-Western power centers led by China and Russia.

The normalization process with Russia, after Turkey had downed a Russian fighter jet in November last year for violating its airspace on the Syrian border, had already begun before the coup attempt and gained pace after President Recep Tayyip Erdoğan's meeting with his Russian counterpart Vladimir Putin in St Petersburg on Aug. 9.

The failed coup by U.S.-based Fethullah Gülen's Gülenist Terrorist Group (FETÖ), will have a lasting impact on Turkish domestic politics and foreign policy. Turkey is already a dialogue partner in the now expanded (India and Pakistan have been formally inducted) Shanghai Cooperation Organisation, an important shareholder in the China-led Asian Infrastructure Investment Bank and a major route and hub of China's "One Belt, One Road" strategy.

Putin telephoned Erdoğan on July 17 to offer condolences for the loss of soldiers and civilians in the coup attempt, two days before U.S. President Barack Obama did. Chinese President Xi Jinping sent his deputy foreign minister straight away in a solidarity visit to Ankara.

Reports from both Turkish and Russian media are positive that many mega projects, including the multi-billion-dollar Turkish stream natural gas pipeline and the Akkuyu nuclear power plant, are back on track. Bilateral relations between the two countries are in revival mode and are likely to go beyond pre-jet crisis levels.

Turkey's relations with the U.S. and NATO were already tense mainly due to differences on Syria and to certain extent on Iraq and Egypt. Turkey is also upset with the Western bloc and NATO for being casual about Turkish security requirements. The West can be clearly seen putting ridiculous obstacles in Turkey's way to develop its defense. Not only that, Western officials use completely unacceptable language, devoid of diplomatic decency and respect, when talking about Turkey. Turkey is now clearly of the view that neither the U.S. nor the EU are trustworthy.

The non-implementation of the refugee deal and silly statements by the leaders of EU countries on Turkey's accession process have further strained relations with the EU. Though there will be no zero sum game in relations with the U.S.-NATO-EU axis but there is an exponential increase in the already huge trust deficit. There is also huge anti-U.S. sentiment in Turkey after the failed coup attempt. FETÖ ring leader Gülen is nestled in a sprawling complex in Pennsylvania, safe under the protection of U.S. agencies, including the CIA. Turks believe that Gülen is a front man for the CIA-Pentagon network and was being used by them to overthrow the democratically elected government of Turkey.

Even though all the top American political and military leaders, including President Obama, Secretary of State John Kerry, Joint Chiefs of Staff Chairman Joseph F. Dunford have strongly denied any U.S. role in Turkey's failed coup attempt, the Americans are not trusted by the Turkish public.

Turkish authorities have been clear about who the main plotters behind the July 15 terror operation were. The Americans also know that they were caught red-handed in their evil designs in Turkey and now they are obviously in a damage control mode although there is little to suggest the U.S. is willing to change its duplicitous policies.

Gülen's extradition has now become a major obstacle in Turkey-U.S. ties. It is difficult to believe that the U.S. will repatriate their old trusted asset who has long been a front man and knows so much about CIA-Pentagon activities in Turkey. There is a remote possibility of the U.S. handing over Gülen to Turkish authorities in exchange for Turkey's absolving the U.S. government of blame in the coup attempt.

On the other hand, indifferent EU leaders and their propaganda media outlets have made the case even worse. Instead of firmly supporting the democratically elected government in Turkey, they have been overwhelmingly showing sympathy with the coup perpetrators. In the early hours of the coup both the Western leaders and their media outlets were working in unison against the government. But, later when the coup failed, these leaders quickly adjusted their tone to damage control and left their media free to demean Turkey and its leaders. Thus, there is a huge sense of Western betrayal that has now come to be deep-seated in the Turkish psyche.

Since joining NATO in 1952, Turkey has undergone four successful military coups and the NATO alliance cuddled all the coup leaders with open arms - the most recent took place in 1997, also notoriously known as the post-modern coup in Turkey. Had the July 15 coup attempt succeeded, NATO would have warmly embraced the new coup criminals as they did with Egypt's Abdel-Fattah el-Sissi.

In the latest coup attempt, Gülenists are just the new facet in the same old tradition of Turkish coup perpetrators. Foreign Ministry spokesman Tanju Bilgiç gave a clean chit to Saudi Arabia and Qatar after reports emerged that Riyadh and Doha were complicit in the coup attempt; Doha maintains the only Turkish military base in the GCC. But the UAE's name in facilitating the coup perpetrators is doing the rounds and no Turkish official has denied these reports to date.

Relations with Qatar, Morocco, Sudan and Somalia will reach new heights after Turkey received their unwavering support in the early hours of the coup attempt. It is true that Turkey under Justice and Development Party (AK Party) rule has frustrated the regional hegemonistic scheme of the U.S.-led NATO alliance. It is seen as a spoiler for the U.S.-designed NATO architecture for the Eurasian region, and it is also difficult to throw the Turks out of NATO.

China is likely to appear more prominently in Turkish foreign policy and relations with Iran and Israel are also expected to grow. Iran's stance in condemning the military coup attempt was clear and prompt. A readjustment on the Syrian front - after the formation of the trilateral dialogue platform with the Russians - is also possible as Syria has proved to be the biggest U.S. and Western betrayal in the Middle East in the 21st century.

Erdoğan also knows that Russia is no trustworthy friend of Turkey, but a mature relationship based on mutual benefits is quite possible and can be developed as a long-term strategic foreign policy objective. The problem with the U.S. and EU is that they are extremely self-serving and unyielding when it comes to Turkey's vital interests. The West can turn suddenly hostile and their policies lack honesty and fairness.

In such a precarious situation, Erdoğan has come to know very well that he does not have the liberty to openly ally Turkey with just one camp. Turkey will try to adjust itself in a way where it is not seen against either the Western bloc or the power centers led by Russia and China. Turkey will also be friendly toward other regional groups and powers in Asia and Africa. Turkey may look at a close relationship with China and Russia as a counterweight against the U.S.-NATO-EU axis. Both China and Russia would similarly look at Turkey as a key partner in the multipolar world.