Junk diplomacy: Can and should Turkey save the EU from total collapse? 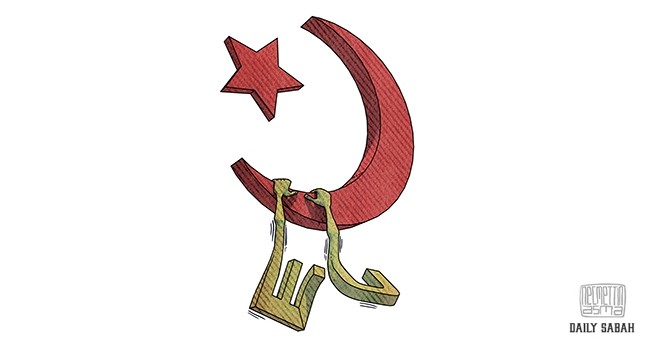 Illustration by Necmettin Asma - twitter.com/necmettinasma
by Martin Jay Sep 15, 2016 12:00 am
Insomnia can be brought on by many things. But consider the sleepless nights Federica Mogherini must be having now in her role as the EU's foreign policy diva. Her achievements to date would put the army of 300 or so press officers in the European Commission's Breydel building in a tight spot if it had to write a press release. The former Italian foreign minister, who was given the job after a political agreement in smoke-filled rooms in Brussels, like the EU, badly needs to find a purpose for herself. Last week she told journalists there would be no EU army in the foreseeable future; this week, she's now talking about an EU army again. Sometimes Mogherini appears totally confused, dazed by the big events and loses it altogether - and suggests bombing Libya with a shiny new EU Navy made up of British frigates. Other times she looks as though she wants to burst into tears when the big guns of Europe – France, Germany, Spain and Italy – won't let her play with toys which are not suitable for her age group and she is left to bemoan her total impotence to journalists, whining on about "member states not giving me powers" et cetera, et cetera.

I just want to offer to give her a hug and make the poor girl a cup of tea and talk about how lovely African babies are and ask her what is the secret to boiling pasta.

Is she losing her mind? Possibly. Is the EU genuinely heading toward an abyss following Brexit? Almost certainly. Is Turkey now its last chance saloon to show everyone that the EU does still have a purpose? You might as well ask yourself if bears defecate in wooded areas. And where the hell is Aleppo for that matter?

Back to Turkey. Many Turks must be wondering why EU folk are jetting in to Ankara almost as though it's a Las Vegas free junket. A junk holiday for junk politicians who can't get jobs in their own countries who need to create a federal superstate in Brussels – a project now which is looking more and more each day like a scrap heap of twisted metal of cars once called "Lisbon Agenda" or abandoned washing machines called "EEAS" or fridges with doors open with shite fake chrome names like "Federico."

And they don't get any more like junk yard dogs like the two German members of European Parliament who rocked up last week for sniff-around. Helmer Brok, head of the apparently prestigious foreign affairs committee, is only known for barking at junior staff in the European Parliament in Brussels and for his unfortunate debacle with prostitutes in Ukraine, which he firmly denies, er, according to the euro press release. And then there's Martin Shulz, the president of the parliament itself. Oh yes he is. This big shot, who actually looks like a hound with sloppy chops, is also from the fatherland and knows all about politics, big business and running a superstate. He must have read all about such things when he was running a bookshop before he made the dizzy heights of becoming a euro member of parliament. I'll let that sink in.

But neither of these characters were particularly supportive of Turkey when a very undemocratic, U.S-backed coup almost got under way in July. Indeed, Schulz in May of this year spoke of President Recep Tayyip Erdoğan almost as though he was a third world despot and was firmly against not only a visa deal but Turkey ever getting in the EU at all. 'Ol sweaty palms Elmar, who some believe in Brussels has a glass eye, ditto.

So what has changed? Has the script of this B Movie had a total re-write in a Jim Cary film set where nothing is real (Brussels) which really shouldn't be confused with EuroDisney world in Paris.

Quite a lot has changed in fact. And Brexit has a lot to do with it. The nervousness of senior EU mandarins has raised blood pressures. People like Schulz, Brok, Mogherini and others are now realizing that not only has their wet dream of a federal superstate been assiduously wiped from the soiled sheets of the warm, bouncy Brussels project but now they are facing a whole new crisis: Te mere existence of the EU itself.

This is not even a faint exaggeration. When world class think tanks like Carnegie write analysis pieces about the EU struggling to find a "role" for itself, you might as well all head to the showers and face whatever post match buggery was coming.

Brexit certainly had a key role to play in this. But other factors are kicking in, which Turkey has to take the praise for. The recent stance by Ankara to build relations with Russia and in so doing distance itself even more from the western sphere was a crushing blow to the EU. If Turkey continues with this strategy, a weakening of NATO – also with a Brussels headquarters – could trigger the collapse of the EU altogether. And it will start in the Balkans where Greece – a country now seriously contemplating leaving the eurozone – might also play the same game with NATO officials in Washington and Brussels. Bulgaria too might shake the boat of an organization that cannot even get most of its members to cough up the minimum 2 percent of GDP spent on defense. And lets not even look at Serbia, penciled in for EU membership soon but about as likely to join NATO as President Erdoğan getting a street named after him in the Belgian capital.

But don't look at the written rules of NATO membership. Look at the unwritten ones for a clue as to how a dramatic no confidence in NATO could start. And Erdoğan takes full credit here. Washington always bullied small NATO members into buying all their arms from the U.S. first and then France and the U.K. second. But what if a new world order opts for buying arms from China and saving a packet? Isn't this the real core of Washington's – and therefore the EU's – loathing of Erdoğan. He's not playing by the rules.

Federica Mogherini's recent visit to Ankara is to see if a miracle of diplomacy can save the EU. She and others in Brussels know only too well that if the refugee situation is not kept under control that there will be a huge backlash from all over Europe and the EU – and weak leaders of many countries will point the finger at Brussels to save their own political careers. That is all it will take for the entire project to collapse, even though I would bet that Greece next year pulling out of the eurozone will probably do it as well.

We got a clue just last week from Donald Tusk, when the EU Council president actually announced that the EU could take no more refugees. But there needs to be a translation here. What he meant was that Brussels could no longer survive with more stories in the European press of refugees committing crimes in France and Germany.

And now in Turkey, Ankara is expected to take the EU seriously when, during the attempted coup, the EU was strangely quiet – almost as though they knew what was really going on and were in on the plan. The EU hates Erdoğan. And it will continue with this barrage of lies about EU accession while it attempts for the final time to trick him into signing a refugee deal which will save the Brussels project from crashing down like a house of cards. But taking advice or courting EU fledglings like Mogherini seems like listening to the ramblings about the merits of dental healthcare from a man with no teeth. Or giving money to a homeless alcoholic sitting next to a cash machine on the streets of central London who is only going to spend it on cheap liquor to feed his addiction. Erdoğan shouldn't bother with such small fry who are only going to cheat him anyway but deal with the foreign ministers of France and Germany directly as when this junk project becomes a scrapyard and Mogherini is working as a junior manager of an Italian think tank, those signatures on any visa or refugee deal will be the only ones worth having. She might even get a decent night's sleep, after all.

*The author is a freelance journalist based in Beirut who works for a number of British titles as well as Deutsche Welle TV
Last Update: Sep 16, 2016 1:10 am
RELATED TOPICS