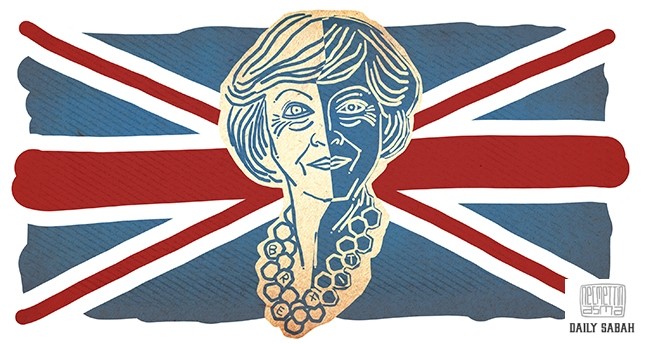 Illustration by Necmettin Asma - twitter.com/necmettinasma
by Martin Jay Oct 07, 2016 12:00 am

The EU crisis is an opportunity for Theresa May. Isn't it time for her and her Brexit team to exploit it and talk to the little people in Brussels?

Theresa May is worrying me. It strikes me that she doesn't have the requisite skills to handle all of the key players nor the zeal for Brexit itself. It's as though her heart's not in it. Will she be the one ultimately who, in two years' time, holds a press conference where she tells the British people that she had no choice but to give in to the EU's demands, leaving the British out of the EU but still saddled with the clamor of blue collar eastern Europeans? Or will she be forced to pull out of Brexit altogether, blaming it on David Davies, Liam Fox or even Boris Johnson - who apparently didn't even want nor believe in Brexit?

She started off well. Heading straight to see the German chancellor who would ideally be a key negotiator on Britain's side, settling the rowdy chorus in Brussels that seeks a feral, almost Dostoevsky treatment of the British plotters.

But Merkel is probably not going to be around this time next year as her own unique take on Syrian refugees caused both a political crisis within Germany and for the EU itself. The German chancellor is now already looking like a spectator to Brexit and the extraordinary panicking that is going on in Brussels by the cabal of euro elite members who genuinely fear the project is shaking like it's never before.

Washed up actors dreaming of one last epic

Almost comically though, Jean-Claude Juncker and others have a knee-jerk reaction to such a crisis, which could be a major factor to Brexit coming off in our favor - or being to Theresa May what WMD is to Tony Blair. Their response, like washed up B movie actors, is to go out fighting in an all-or-nothing last bid to reinstall themselves on the big screen. The EU is moving to take even more power in a midlife crisis.

Think old men growing long hair, buying impossibly large motorcycles and dating women half their age. Or your father coming home and showing you his "live to ride" tattoo on his chest.

If Juncker and his band of brothers can seize more power of Member States through an EU army, credibility will be restored, they believe. The EU is all about small people thinking way outside of their own capabilities. In many ways it is a dichotomy of values of what Europeans believe and trust in their own countries; authoritarianism supposedly complimenting democracy, but ultimately shadowing it.

But are the authoritarians looking to the U.K. and Brexit to save themselves?

Facetime for the German MEP

Recently, another EU official came to visit May in Downing Street. Martin Schulz MEP came to deliver to the prime minister a clear message about the Brexit deal. Schulz is a typical product of the EU who was a bookshop owner before entering the glitzy world of euro politics and has risen to the ranks of president of the European Parliament. Working closely with him however and empathizing with the crisis he and his friends are in could be the right formula for getting the deal Britain wants. Schulz may even stand in next year's elections in Germany as chancellor, after all.

It's time to start doing what the British are brilliant at - diplomacy - and turning our back on the antagonism and confrontation, which can only threaten our future.

It's time for May to leave national leaders and work with the small people in the Belgian capital. May should treat Juncker and Schulz like VIPs as their foibles can be Britain's gains. Never before, despite their fiery talk, have these characters been so vulnerable.

What is so abhorrent about Britain helping the EU survive while it carves a better deal for itself?

Many in Brussels will be thinking of all time lowest turn outs in EU elections in 2019, which is another reason why Brexit should be done by then and an EU army can eclipse bad media coverage with pictures and hand out a video of Italian and German soldiers on foot patrol in Libya or even in Syria, with blue arm bands on their shoulders.

Brexit has created a panic in Brussels amongst the little people there who are literally preparing for a war - any war - just to smash dissent among some EU leaders who had the temerity to suggest after Brexit that the EU needs to be less bold and more flexible.

Juncker can write off 100 million euros of UK trade

Yet this madness could play into May's hand. If her and David Davies can start to sympathize with the unprecedented plans which the EU is hoping to charge through, Britain could have the upper hand on Brexit. The recent inertia in Bratislava to grapple with an EU army blueprint and to demand more power is the act of lunacy. But it is understandable. The EU has failed as a single market and so now it needs to think big. Big problems, which only it can solve with big solutions, are visible and make good pictures in the media.

Juncker and others are not in a fit state of mind to think that the EU will lose more credibility if it writes off 100 million euros of trade with Britain, just to prove a petulant point. They would rather compensate German car workers themselves with EU money rather than give Britain the dream deal it wants.

This old argument of Nigel Farage that the EU would never cut its nose off to spite its face is looking less convincing coming from a man who appears to be in the throes of a midlife crisis himself.

May should be thinking big as well. Certainly, she should stand firm in this game of bluff with Brussels while she tells Scotland that it should "forget about a referendum."

But she is not acting like she knows the big picture and how to play on the weaknesses of the euro elite. And playing out a prolonged game right to the last day might not be the right tact, even though Liam Fox praises her for her slow hand "methodology." Why not get negotiations started right now so as to help Juncker and Schulz, so that Brexit can be resolved way before the European elections in 2019?

Could a simple, straight forward tariff deal on UK goods, in exchange for our own visa system for EU nationals, be a solution? Schulz has firmly said Britain can't have access to the market and call the shots on its own immigration criteria together, or at least not without paying a premium. But if he was seen to broker such a deal, he could be the small man from Brussels who saved the EU from falling on its own sword. Britain and the EU are in a race for a 2019 finish line - for May's cabinet, and it's essential that they go to the polls out of Europe, just as it is for the EU as it has its own elections in the same year. But this Tory government cannot expect to get re-elected if the EU just lets the two year deadline pass and then Britain is ejected out of the EU with no deal at all.

Surely a race where both runners get a medal at the end of it is better than one where neither even leaves the blocks.

* Martin Jay is a veteran foreign correspondent, based in Beirut, who works on a freelance basis for a number of respected British newspapers as well as Deutsche Welle TV.