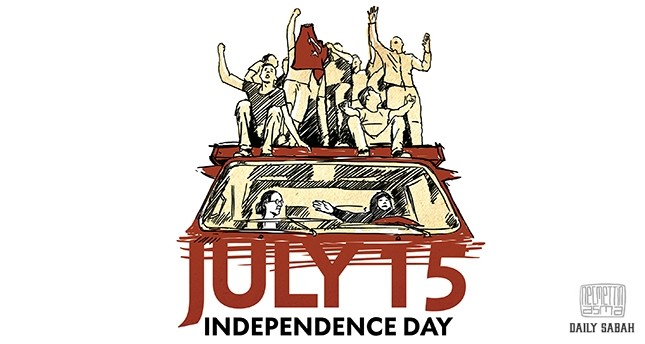 Illustration by Necmettin Asma - twitter.com/necmettinasma
by Ömer Baykal Oct 10, 2016 12:00 am

There are important political turning points that are described as "revolutions" in political history. The field of political historiography studies these crucial moments. Academics in this field have always been enthusiastic about giving lectures on the history of revolutions to university students. Revolutions are crucial, not only for a country's own political history but also for other countries and nations that have been effected and inspired by the revolution. The most popular of these revolutions are the French, American, British, and Russian revolutions. It can basically be said that there are two types of revolutions in terms of their sources. The source of the first type of revolution comes from the social structure and it belongs to the field of historical sociology. These kind of revolutions have always shaped politics as a result of long term, great and challenging fights by the broad masses. Quite contrary to the first type of revolutions, the second type has always happened by force by elites in the country that are trying to change the social and political structure in a crude and bossy manner. So, where do Turkey's experiences stand in the history of revolutions?

First of all, in Turkish history, the main actor for change in the country has always been the state itself. Politics, economy, society and the intellectual realm can be influential only if the state allows them to be. So, the most important aspect in order to analyze power relations is the position of the state. In other words, what society and people want is secondary to the changes. Although populism in Turkey is a crucial proposition for politicians, its real life effect is marginal.

There are three dates labeled "revolutions" in Turkish political history. The first is called the "Big Revolution," the proclamation of constitutionalism on July 23, 1908. The second is the proclamation of the Republic on Oct. 29, 1923 and the last one is the coup against the multi-party system on May 27, 1960. They are all called revolutions. The other common point of these dates is their absurd festive celebrations. However; the coup on May 27, 1960 and the proclamation of constitutionalism are armed interventions performed by the military without democratic legitimacy.

In addition, Mustafa Kemal decided to establish the Republic after closing down the democratic assembly (the First National Assembly) without getting society's consent and taking the opinions of different political entities. Accordingly, these political developments are regarded not as social-oriented revolutions, instead they were all political actions taken by "military, intellectual and bureaucracy" tutelage, which is politically described as a "historical bloc" in Turkey.

NATIONAL FACE OF THE REPUBLIC

Because the experience of Turkish modernization is not based on society and democracy but based on the state and authority, it has provided harsh and commanding political change. There are two important turning points that have changed this system. One of them is May 14, 1950 when the Democratic Party (DP) ended the single-party regime. The first phase of the real National Revolution began on this date in Turkish politics when social actors started appearing on the political scene. Unfortunately, this positive development lasted only 10 years and it was stopped in a bloody manner. The execution of Adnan Menderes, a former member of the Republican People's Party (CHP), and his two friends by the military left a bad memory in the Turkish consciousness. Unfortunately, the weakness of political participation, the opposition and democratic discourse did not allow society to protest the bloody incident. This deadly memory remains an internal wound for the Turkish people. However, the path of Adnan Menderes and his friends has been followed since and it created an unstoppable and unpreventable power that we witnessed on the night of July 15.

This time, democracy not only appeared in the ballot box but was taken to the streets, squares and on the tanks. The Turkish people who were not allowed to react to the execution of Menderes and his friends in 1961 have now had their revenge by standing against the weapons that were bought by their own tax money. They defended national and democratic legitimacy. This repelling by the Turkish people is crucial in terms of resistance to learned helplessness. The democratic resistance against the coup plotters expressed a breaking point that Turkish people, this time, could say "stop" to a political/military attempt that has been traditionally experienced every decade from 1960 to the present day.

This change can be seen as the reflection of the opposite character of Turkish right wings that have been criticized as conformist and traditionalist. When considering that politics has its own social base and creates a social construction, the masses that support the Justice and Development Party (AK Party) under the leadership of Recep Tayyip Erdoğan have gained strength via the opposition they showed to a serious political crisis.

The masses supporting the AK Party provided the national will by standing behind political will. They stood against military declaration on April 27, the closure case against political will, Gezi Park protests, PKK terrorism and finally the Gülenist Terror Group (FETÖ) terrorism. These people cannot be described as just the "masses" but they also represent an intellectual and political identity in society. This identity started with the power of the DP in the 1950s and then continued with the Motherland Party in the 1980s and then with the Welfare Party in the 1990s. It has gained an ideological dimension over these years. Finally, the AK Party embraced this identity in 2002.

Today, the AK Party under the presidency and leadership of Recep Tayyip Erdoğan not only represents conservative Islamic people but also embraces many identities coming from different political backgrounds. This characteristic makes the party a "catch-all party."

The AK Party has been exposed to ideological isolation as every catch-all party has in their development process but it has not lost its own soul.

This process has given an opportunity to the people who were once excluded or disturbed due to his/her political view, to have the right to voice freely his/her ideologies. Other right wing parties like the AK Party have showed success periodically but what makes the AK Party different or more successful than them is that it gives self-confidence to rising classes in society.

The July 15 resistance is one of the most important moments for Turkey's democratization and nation-building process, which began on May 14, 1950. Unlike intellectual circles who are proficient in the narrative of the history of revolutions, or social movements, the Turkish people have written a heroic story that cannot be described but only experienced. The future will show that the memories will never be forgotten in the history of revolutions. Simply put, the winner is the nation and loser is the "military, intellectuals and bureaucracy junta."