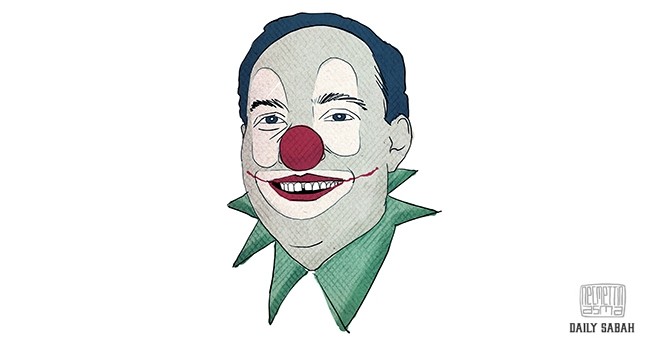 Michael Rubin, a sly old fox, works with or for some who always have hidden agendas for Turkey and the region, and who, of course, supported the bloody coup attempt that took place on the night of July 15

The Nation editor Robert Dreyfus calls him "mind-boggling stupid." Daniel McAdams of Antiwar.com calls him "Comrade Michael" because he once wanted "the Gulag," the purge practiced in the Soviet Union, for those U.S. military and diplomatic officials infracting the party line of the secretary of state. For some, he is a committed and unapologetic neocon, those so-called conservatives who brought us the Iraq war, Iranian appeasement (namely, a plane-load of cash money for mullahs), repurposing a terrorist group (the Democratic Union Party(PYD)) against another terrorist group - Daesh - in Syria, and now they are about to wreak havoc in Mosul, saving the historically Sunni metropolis from Daesh with an Iranian-Shiite brigade, risking ethnic cleansing afterwards.

He is Michael Rubin, an Iranian expert who cannot speak, read or write Farsi. (In his 41-page biography he does not mention knowledge of any foreign language.)

According the WikiSpooks website, an open source collaborative project to re-examine recent history, Rubin is a neocon activist who has served as editor of the hardline-Zionist Middle East Quarterly since 2004. Rubin was in Iraq as a political adviser for the Coalition Provisional Authority (a transitional government in Iraq following the invasion of the country); before this post, he was a staff assistant on Iran and Iraq in the Office of Special Plans (OSP) - an office created by Paul Wolfowitz (the original neocon) and headed by Douglas Feith. Then Secretary of Defense Donald Rumsfeld charged this group with providing intelligence - any intelligence - for the George W. Bush administration so that it could invade the country. What they did was later described as stove piping, shortcutting intelligence gathering processes and providing authorities with raw intelligence (unvetted by analysts). Remember the massive accumulation of weapons of mass destruction, which never was? Yes, Mr. Rubin, before becoming "the pudgy-faced boy wonder of the American Enterprise Institute," was a "raw intelligence provider" in Iraq. Writes Robert Dreyfus in The Nation:

"The 2000s produced a panoply of villains, cretins and bunglers on Iraq and the broader Middle East. Truly, however, none of them can hold a candle to the pudgy-faced boy wonder of the American Enterprise Institute, Michael Rubin."

After leaving intelligence gathering activity in Iraq, Robin returned to the AEI as a resident scholar. There, he was busying himself with three main issues: Iran and its radical Islam, Saudis and their exporting jihadism and Fetullah Gülen and his fight against the secular Kemalist regime in Turkey. The AEI archives are teeming with Rubin's articles on the resemblance of Fetullah Gülen's organization to the Iranian mullahs and al-Qaida. His self-proclaimed Iranian expertise was helping him:

"Few U.S. policymakers have heard of Fetullah Gülen, perhaps Turkey's most prominent theologian and political thinker. Self-exiled for more than a decade, Gülen lives a reclusive life outside Philadelphia, Pa. Within months, however, he may be as much a household a name in the United States as is Ayatollah Khomeini, a man who was as obscure to most Americans up until his triumphant return to Iran almost 30 years ago."

This was in 2008. He was warning his readers vehemently:

"Because of his statements and veiled threats, the judiciary in 1998 charged Gülen with trying to 'undermine the secular system' while 'camouflag[ing] his methods with a democratic and moderate image.' Convicted in absentia, but free to run his organization from his U.S. exile, Gülen continues a rather inconsistent approach to tolerance and secularism. He often equates the separation of religion and state with atheism, an assertion many of Turkey's most secular officials find offensive. In 2004, Gülen equated atheism with terrorism and said both atheists and murderers would spend eternity in Hell."

Now that he was considered an "area specialist," other news and opinion outlets started to refer to him. In 2012 the German magazine Der Spiegel quoted him:

Years passed and Rubin's hatred of Gülen's so-called movement only increased. Up to May 2015 that is! He reconsidered the Gülen group in an article in John Podhoretz's Commentary magazine:

"I have often been suspicious of the Gülen group, although as I reflect, I realize I may have been [sic] misread the movement. While this post will be lengthy, the topic remains relevant and may be interesting to those focused on Islam and reform, and so I hope to address why I was suspicious, and why I have slowly been changing my mind. Over time, the basis for my suspicion of the movement has been multifold, although much of it had little to do with Gülen himself."

Gülen himself considered this article an apology and accepted it:

"In a recent article on Commentary Michael Rubin 'reconsidered' Gülen group. He confessed that he has been absolutely unfair towards the group and expressed his regretfulness [sic]. In the same article, Rubin compared Erdoğan with Khomeini and the Muslim Brotherhood regarding deceiving the West about their sincere view of democracy. He emphasized that the deception with Erdoğan was the greatest of all."

The main reason Rubin offered for changing his mind was that the Gulenists now stopped to "carry water for Erdoğan":

"...[I]t long appeared to me and others that followers of Gülen were working in an unholy alliance with Erdoğan in order to transform Turkish society fundamentally away from its Kemalist past and to blur the line between mosque and state... Approximately a year-and-a-half ago, Erdoğan turned on Gülen and his followers. He launched a purge throughout the bureaucracy which, while not bloody, would nevertheless make Stalin proud. Any one even suspected of supporting Gülen or his myriad charities and schools-thousands and thousands of people-could and did find themselves out of a job without due process and, in some cases, could find themselves in prison. These are men and women who are sometimes responsible for feeding and clothing numerous children and parents, all of whom are now cut off."

Whether it is Michael's good heart about the charities or Erdoğan's becoming their common enemy that helped mending his fences with Gülen apparently it didn't stop here: This turncoat's expertise in other fields, namely his raw intelligence gathering prowess was also in play. (What are useful idiots for?)

Newsweek magazine republished Rubin's AEI article "Will There Be a Coup Against Erdoğan in Turkey?" on March 23. The Newsweek editors should know better because the "reasons" Rubin mentioned in his article could be morally (and realistically) acceptable for his own AEI, but no reasonable Western editor would touch this piece of garbage with a 10-foot pole.

According to Rubin, "Turks - and the Turkish military - increasingly recognize that Erdoğan is taking Turkey to the precipice," which was made of "deterioration in security amidst a wave of terrorism," "out of control private debt," "the free-fall of tourism sector" and "the decline in the currency impacting every citizen's buying power." Also President Recep Tayyip Erdoğan was "imprisoning opponents, seizing newspapers left and right and building palaces at the rate of a mad sultan or aspiring caliph." Oh, one more "reason": His son "fled Italy on a forged Saudi diplomatic passport as the Italian police closed in on him in an alleged money laundering scandal."

I worked as an editor for more than 40 years in Turkey and in the United States; I would not publish such a flimsy analysis based on innuendos, weak arguments and officially denied and false material, but neither would any of the editors I worked with. Newsweek should have asked the author which opponent was imprisoned by the president; how could the head of the executive exercise judicial powers in a constitutional system? What palaces have he had built? And where was Bilal Erdoğan, the president's son, at the time of publication of this article?

All of these were sheer lies, and a beacon of western media, whose editors lived in Turkey for a long time and have correspondents in the country, should know that this would only be adding oil to the already flaming anti-Americanism fire.

Despite all the factual errors, 111 days later this article would prove one thing correct: Rubin knew that there would be a coup by his new best friends because on July 15 there was indeed a coup attempt by the Gülenists. The Newsweek website reported it joyously: "Turkish Military Says It Has Taken Power To Protect Democratic Order."

I didn't see Rubin that night, but I am sure he was dumbfounded like many other media representatives of the Gülen group on television that night. Something that never happened before happened that night: Turks, young and old, religious or not so religious (people have been reported pouring out of bars and meyhanes - local watering holes for raki and cheap Turkish wine lovers - to the streets), men and women (a lady who took her husband's truck - despite serious threats from him - to carry her neighbors to the city is now very famous), conservatives and progressives stopped the tanks. The perpetrators of the coup (and those informed by them that "Erdoğan is finished tonight!") were angry, devastated - no, thunderstruck. Since that fateful night, the nation has been warned about the forthcoming coup "that will finish Erdoğan this time." Three times such dates were given. Even Gülen gave a date himself.

Rubin joined the "next coup" chorus. His only difference is that he was giving us the exact nature of the forthcoming coup: They will kill Erdoğan. Rubin had the guts to call Erdoğan "a dead man walking," a capital punishment convict approaching the gallows in every step. Some guts really.

Speaking from a journalistic point of view, one should never be so determined and precise in his predictions because they may prove false, and you will face your editors (let alone your readers or viewers). As an academic, you would sound so - what is the word I am looking for - pedestrian to your peers; they would say that you know nothing about scientific objectivity. Even for someone like Rubin, it needs some effort to understand why he did this.

Coups, like proxy wars in Sudan, Yemen, Iraq and Syria, need international backing. With camouflage during the preparation, physical help during implementation (Who can forget the Stafford Institute's valuable contribution to pinpoint Erdoğan's plane in the air when the putschists' F-16s lost it?). This means money, material, time and energy. Now you have to explain to your stakeholders (or investors) why they should keep supporting you. The Newsweek editors, for example, need to know if they are going to embarrass themselves again with their articles.

Rubin, on behalf of his new ally against Islam, had to have courage. By God, he had.