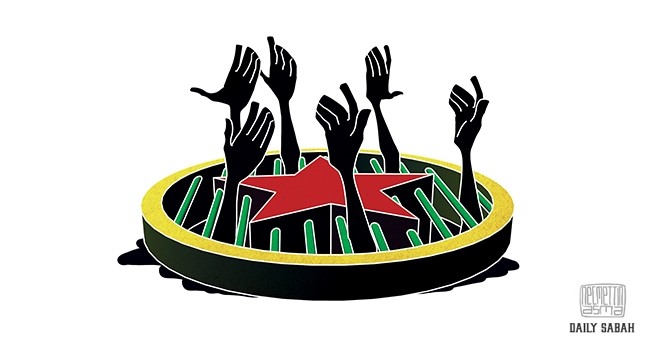 Illustration by Necmettin Asma - twitter.com/necmettinasma
by Markar Esayan Oct 19, 2016 12:00 am

If Lenin had been alive today, he would have praised the PKK's lies. And Goebbels would have given homage to them

Every terrorist organization operates on a two-pronged strategy. It includes conducting terrorist acts first and then amplifying their effects and the resulting horror through a propaganda machine. As a terrorist organization, the PKK also employs this tactic "successfully." So much so that the PKK uses its offshoot, the Kurdistan Freedom Hawks (TAK), for attacks on civilians in Turkey's southeast meant to intimidate those who refuse to bow to it, or for committing large-scale massacres against civilians in big cities, not claiming responsibility for these attacks.

Of course, the PKK itself has also committed a lot of civilian massacres. Indeed, the PKK began its bloody campaign in the 1980s by killing Kurds. Civilians, including toddlers, were targeted for allegedly overthrowing the feudal order. During the reconciliation process, PKK militants fired RPGs at two cars in Siirt killing four women inside, with two others losing their legs. The PKK's attacks in recent months have left 10 children, including five-month old babies, dead. Let me give their names and ages so that no question mark is left in the minds of people: Ecrin Açıkgöz, 1, Hayrettin Şınık, 11, Müjdat Ay, 12, Harun Çağlı, 4, Ayşenur Geçit, 6, Müslüm İlhan, 8, Enes Erdem, 9, Viyan Kanat, 5, Doğan Kanat, 10, Mevhibe İrem Çiftçi, 5 months.

Naturally, they are inevitable collateral damage for the PKK in the name of a noble cause. It expresses "sadness" over the killings, which it cannot cover up or delegate to front organizations.

But the PKK does not just use its propaganda machine for only covering its sins. As it gets serious support and enjoys free movement in Europe due to an "emotional" reaction against President Recep Tayyip Erdoğan and the motto "my enemy's enemy is my friend," it also produces scenarios to strengthen its position there.

Sadly, the Peoples' Democratic Party (HDP), which entered Parliament with 80 deputies with the help of an atmosphere created by the Reconciliation Process whose architect was Erdoğan, has turned into a propaganda machine for the PKK. Not only does the HDP fail to condemn the PKK's attacks, but it also places the blame for these attacks on the government by constantly manufacturing lies, while providing support in spreading lies that can influence the West at the same time.

One of these lies was recently exposed.

Hurşit Külter, the Şırnak provincial leader of the Democratic Regions Party (DBP), which is another "political" entity with direct links to the PKK specifically targeting Kurds in the southeast, was missing since May 27, 2016. It was claimed that Külter had been tortured and killed by the Police Special Operations (PÖH) units. Besides, they refused to surrender his body, too.

Thus a campaign was conducted by the PKK, HDP and all their affiliate organizations in Turkey and especially in the EU and the U.S. for 138 days, over Külter's disappearance. In a piece titled "Introduction to the Hurşit Külter affair," Sabah daily columnist Melih Altınok explained the situation as follows:

"Campaigns were launched and columns were penned on behalf of Külter. Photographs showing worried and agonized faces of his mother and other family members were passed around. His pictures were painted on walls in the streets. Demonstrations were held in many cities abroad. In fact, even the U.S. was involved in this affair. On the 49th day of Külter's disappearance, U.S. State Department spokesperson John Kirby said they would conduct an investigation into the issue. Not only that, Kirby urged Turkey to give the U.N. access to the region."

They said Külter appeared safe and sound in the Iraqi city of Kirkuk on Oct. 7, 2016. Such was his explanation:

"After I left the building, they noticed I was gone. They wanted to shoot me in the back, or to catch me, but I ran and escaped. I hid in the city. I looked for a way to contact my family or the press, but I couldn't find any. For around 40 days, I hid in evacuated houses. Then I came across some resisters in the city and I got out of the city. After I got out, with some help I was able to get here in a two-month long journey."

When you add up the number of days given in Külter's statement, they total 100 days. In other words, assuming what he says is true, he couldn't post a single tweet on social media, couldn't contact a single journalist, and couldn't make a single telephone call though he was safe in Kirkuk for more than a month. Obviously, it is highly likely in this case that there is not a trace of truth in his statements. Turkey and its government faced enormous pressure for 138 days due to an imaginary murder, while the PKK's civilian massacres were obscured thanks to the affair. The HDP has brought forward the issue many times in Parliament, of which I am also a member, and accused the government and the president of murder and torture. While Külter's play was being staged, the PKK was busy digging trenches in the southeast, trying to invade Turkish territories along the Syrian border across towns seized by the PYD and PKK. Many towns like Cizre, Nusaybin and Sur were filled with trenches packed with tens of thousands of tons of bombs.

Just two years ago, on Oct. 6-7, 2014, when the HDP's Central Executive Committee and its Co-Chair Selahattin Demirtaş called Kurds to "take to the streets" under the pretext of Kobani, two police officers were killed in the ensuing violence. In Diyarbakır, 31 people, among whom were Yasin Börü and his three friends who were distributing meat from sacrificial animals to the poor, were killed and 221 citizens and 139 police officers were wounded.

During the Oct. 6-7 incidents, the real purpose was to either cow into submission or drive away from the region devout Kurds. The same method was employed in Afrin, Kobani and other regions as well and 17 different Kurdish groups, particularly pro-Barzani Kurds, were driven away into Northern Iraq. Indeed, during the process starting with Oct. 6-7 incidents 200,000 Kurds migrated to the western parts of Turkey. Their cities were sacked. A lot of civilians were killed.

Hence, all this had to be explained to the Western public opinion and human rights organizations. A lot of scenarios and lies were needed to whitewash a brutal terrorist group like the PKK and its Syrian offshoot the People's Protection Units (YPG), which commit countless human rights violations like recruiting child soldiers and kill civilians directly, which resumed a mindless war after putting an end to the Reconciliation Process.

The PKK, HDP, PYD and YPG employ Goebbels' famous tactic: "If you repeat a lie often enough, people will eventually believe it."

The lie is so big that even the generally pro-PKK Turkish left is divided. Cumhuriyet daily covered the affair a little embarrassed and wrote:

"Hurşit Külter not making a statement during more than two months raised questions. Some argue that not disclosing for more than two months that Külter was alive would deal a big blow to efforts in support of missing persons, while others oppose this saying the only thing that matters is Külter is alive."

Of course, the fact that Hurşit Külter is alive is good news. But was it worth all the torment and grief suffered by his family, assuming they were unaware of the facts, for 138 days? Külter's grieved mother has appeared on media many times. Naturally, the PKK cannot be expected to think about such details while pursuing its noble cause.

Leninist ethics summarizes its approach as "To make an omelet, you have to break some eggs." I think if Lenin had been alive today, he would have praised the PKK's lies. And Goebbels would have given homage to them.

However, we believe in a contrary wisdom and argue that you cannot achieve the right outcomes through wrong methods and that methods and practices determine the end result.

The PKK, HDP, PYD and YPG, just like Daesh and the Gülenist Terror Group (FETÖ), are just puppets in Syria and Iraq-based redesigning efforts. They don't care about Kurds or peace at all.

Kurds themselves seem to have realized this as opinion polls reveal a rapid decline in HDP votes.
Last Update: Oct 19, 2016 8:35 am
RELATED TOPICS