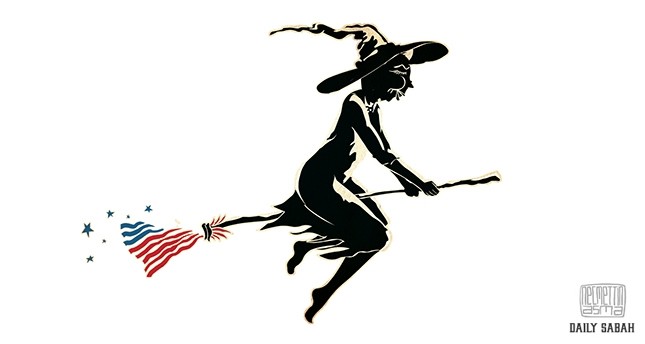 In an attempt to foresee Clinton's doctrine in this sensitive region, one wonders if she is going to replicate the belligerent policies of George W. Bush, or if she might be more interventionist than Obama, or rather if she would produce a unique doctrine that is not an extension to her predecessor or a replication of any other presidents

Based on the latest polls and unless fortuitous surprises pop up, The New York Times' Upshot elections model predicts that Hillary Clinton is more likely to win the American presidency.

Despite the endless excruciating conflicts in the Middle East, the upcoming U.S. election has been closely followed, simply because the U.S. is still the most influential power that delineates the features of the future of the Middle East. Barack Obama's controversial non-interventionist foreign policy will soon be superseded by Clinton's eagerness for American exceptionalism.

Clinton, the Democratic presidential front-runner, is eminently renowned as more hawkish than the outgoing president, Obama. At the time Obama fervently opposed the invasion of Iraq in 2003, Clinton voted in favor of the war. Obama's doctrine was unequivocally palpable; the U.S. should lead from behind and doesn't have to squander its mighty military in pointless entanglements.

In her relentless attempts to refute allegations accusing her of being a shadow of Obama's policy, she repeatedly reiterates "I'm not running for Obama's third term." Both (Obama and Clinton) believe in American exceptionalism that emanates from American's responsibility to lead.

As expected, the instability of the universal system has progressively overshadowed the domestic questions that dominated the American election. The Middle East is undoubtedly in the center of the imminent issues that need to be addressed differently.

In an attempt to foresee Clinton's doctrine in this sensitive region, one ponders if she is going to replicate the belligerent policies of George W. Bush, or if she might be more interventionist than Obama, or rather if she would produce a unique doctrine that is not an extension to her predecessor or a replication of any other presidents.

As competition fiercely heats up in the most controversial American election ever, Republicans are desperately trying to make Libya's fallout a keystone criticism of the Democratic front-runner's foreign policy. However, Clinton has no regret about Libya simply because she doesn't reckon the American intervention in Libya as a failure, but rather as an unfinished mission. Obama's perspective is pretty close to Clinton's, though he probably thinks that his administration's myopia in planning for the day after was the worst mistake in Libya.

Additionally, according to Jeffery Goldberg's controversial article "Obama's Doctrine," Obama suggested that the existing political anarchy in Libya was mainly instigated basically because his allies in the region are "distracted," and don't possess the initiative to take the helm and hold some responsibility.

However, the cornerstone of Clinton's doctrine in the Middle East is what she relentlessly reiterates: "We can't cozy up to dictators. We have to stand up to them. We can't contain Daesh; we must defeat it and we will."

In her book "Hard Choices" Clinton wrote, "None of our relationships in Europe needed more attention than Turkey; a country of almost 80 million people, overwhelmingly Muslim, with one foot in Europe and one in southwest Asia." She also described the Turkish president Recep Tayyip Erdoğan as the man who "holds the key to the future of the Turkey-U.S. relationship."

Lately, there have been unequivocal signs of mounting tensions or rather, outright disagreements, between Ankara and Washington; generally over the Syrian war and more specifically related to PKK's Syrian branch of PYD/YPG terrorists' role. The Obama administration has deliberately overlooked Turkey's concerns and interests in the region and that led to Turkish unilateral moves that could end up in an inevitable political rift between the two strategic allies.

Interestingly, it's argued that Clinton and Erdoğan were reading from the same page when it came to Syria. As Secretary of State, she was enthusiastic towards Erdoğan's idea to train and arm moderate Syrian moderates, but Obama was reluctant, predicting that weapons could end up in terrorists' hands. Clinton also backed Erdoğan's proposition of a no-fly zone to protect displaced refugees who fled the bloody conflict, and she correspondingly pushed for deploying boots on the ground to fight Daesh, though she was not after a full-scale intervention.

Wait! This doesn't mean that the Turks and Americans should start preparing for a honeymoon if Clinton is elected. The recent "email scandal" revealed ties between Clinton and Fetullah Gülen, the Turkish leader of the Gülenist Terror Group (FETÖ) who is the leader of the recent coup in Turkey on July 15 and who lives in self-exile in Pennsylvania.

It's out of the question that Turkey abandon its vehement stance against Gülen who is the mastermind of the thwarted coup attempt, as his extradition is a matter of sovereignty. Ankara still doesn't buy Washington's hesitation to extradite the person behind the brutal coup last July.

When it comes to Syria, however, Clinton's outspoken foreign policy line seems to cast dark shadows on the murderous regime of Bashar Assad. Jeremy Bash, Clinton's foreign policy advisor, firmly restated that Clinton will order a "full review" of the United States' strategy on Syria as one of her first priorities if she is inaugurated as president of the U.S.

Will she adopt Bush's policy in the sense that she intends to deploy boots on the ground and work with alliances to topple Assad? Or will she go on with Obama's top-down approach, i.e., drone strikes from the sky backed by logistic and intelligence support? Those combined approaches proved to be a recipe for not only the sustainability of conflicts and the suffering of innocent civilians, but also a prescription for total disaster in the Middle East.

Finally, one needs to recall Clinton's perception of political Islamists in the region; some superficial, unfounded criticism accused Clinton of supporting the Muslim Brotherhood (MB). In her visit to Egypt's first democratically elected president, Mohammed Morsi, in 2013, she diplomatically communicated her country's strong support for the Egyptian people and their democratic transition. She also recapped that the U.S. sees the MB as a good partner that promotes the democracy accomplished by the bravery and sacrifice of the Egyptian people in the January 25 revolution.

However, as she also revealed in her memoir, she was insisting Obama not push then-Egyptian president Hosni Mubarak to leave. She rather favored a stodgy-sounding "orderly transition" solely because Mubarak's departure meant the unavoidable emergence of the Muslim Brotherhood, the only organized forces on the ground.

On the other hand, Clinton relentlessly accuses Hamas, the offshoot of MB in Gaza, of provoking Israel. She bizarrely claims that Hamas often pretends to have people in civilian garb acting as if they are civilians but in fact, they are Hamas fighters. These stances of unequivocal support to Israel are her most important credentials. Without equivocation, Israel is the preamble of any American doctrine and other chapters - countries - should logically conform to the ideas of its preface.