From that map to this map 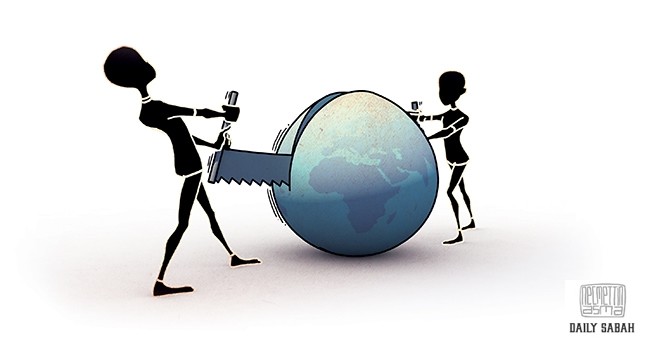 Coalition's fight against Daesh terror in Mosul has revived an old plan of global actors for the Middle East. They again seem to be thinking about redrawing the borders of the region's maps but Turkey is now aware about all of it

If you publish a magazine, title it "Armed Forces Journal," and put a map in an article under the banner of "Blood Borders - How a better Middle East would look," it would surely raise many eyebrows in the countries you suggest to dismember.

People even in the United States might think that it is an official armed forces publication. Especially at the time of this publication the fact that those armed forces were heavily into a remapping business that could make the British Foreign Ministry cringe with envy, anybody would take your map seriously. If a target country were the subject of a divide up into seven countries as recently as 90 years ago, its denizens would naturally get suspicious about the long-term plans of even a good ally.

All this happened when the Armed Forces Journal (a Sightline Media Group magazine) published in 2006, three years after the U.S. Iraq occupation, a map "giving" one-third of Turkey's territory to what it calls a "Free Kurdistan," creating a "Sunni Iraq," and an "Arab Shiite State," in the Iraq we know, and a "Free Baluchistan" between Afghanistan and Pakistan. It also suggested a dramatic redesign of the Arabian Peninsula.

The person who wrote the article and drew the map was retired U. S. Army lieutenant colonel, author and media commentator, Ralph Peters, well-known for his appearances on Fox News. According to his biography, after joining the U.S. Army in 1976, Peters spent 10 years in Germany working in U.S. military intelligence. He later became a foreign area officer, specializing in the Soviet Union. He attended the Command and General Staff College. Peters's last assignment was to the Office of the deputy chief of staff for intelligence. He retired in 1998 as a lieutenant colonel.

Peters has supported the 2003 invasion of Iraq and later the war in Iraq. He strongly defended U.S. efforts in Iraq to create a "democratic" society. However three years later he lost his hopes of a "democratic reform" in Iraq. He wrote in a newspaper article "the chances for a democratic, unified Iraq are dwindling fast." He speculated, "Only a military coup could hold the artificial country together." Of course, Peters did not mention the harm done by the occupation, but blamed the Iraqi people: "It appears that the cynics were right: Arab societies can't support democracy as we know it."

During the discussions on the proposed "troop surge," Peters opposed sending more U.S. soldiers to Iraq and came up with "a better and decisive solution:" Redraw the borders in the entire Middle East according to the blood lines.

Borrowing from Churchill that "the unjust borders in the Middle East could generate more trouble that can be consumed locally," he wrote that he was thinking the unthinkable:

"As for those who refuse to 'think the unthinkable,' declaring that boundaries must not change and that's that, it pays to remember that boundaries have never stopped changing through the centuries. Borders have never been static, and many frontiers, from Congo through Kosovo to the Caucasus, are changing even now."

Peters defended his maps saying that redrawing the borders would undo the injustice done during the partition of the Ottoman Empire:

"The boundaries projected in the maps accompanying this article redress the wrongs suffered by the most significant 'cheated' population groups, such as the Kurds, Baluch and Arab Shia, but still fail to account adequately for Middle Eastern Christians, Bahais, Ismailis, Naqshbandis and many another numerically lesser minorities. And one haunting wrong can never be redressed with a reward of territory: the genocide perpetrated against the Armenians by the dying Ottoman Empire."

In the Turkish language there is no one word meaning irredenta - a territory historically or ethnically related to one country but under the control of another -hence no equivalent of irredentism. Not only the words are missing from the lexicon, but also the concepts are alien to the new Republic of Turkey, which has been built on the premise of "Peace at home, peace in the world." Yet, there is a map in the hearts and minds - and a lump in their throat - of people in Turkey, based on the "Misak-ı Milli" (National National Oath), which in turn is based on the six important decisions made by the last Ottoman Parliament in February 1920.

When this parliamentary resolution was adopted as the last act of the Ottoman Mejlis, the Allies worried so much that, fearing the Ottomans would never agree a peace treaty, occupied Istanbul and other parts of the Empire. Turkish nationalists under the leadership of Kemal Atatürk, who later became the first president of the new country, fled to Ankara and started what is now celebrated as the Independence War. At the start of the war and later seeing of the Turkish delegation off to the Lausanne Peace Talks, Mustafa Kemal emphasized the importance of that National Oath:

"It is the nation's iron fist that writes the Nation's Oath which is the main principle of our independence to the annals of history."

Despite the warnings of Churchill, the Allies remapped the Ottoman Empire in such a way that it created troubles that cannot be consumed internationally, let alone locally. The new Turkey, in dire need to be recognized by the world and deprived of experienced Ottoman diplomats (Ankara regime had been represented by retired army officers) could not and did not drag its feet on realizing the borders based on the Misak map. But Turkey never forgot how the British cheated them first in Lausanne, later in the League of Nations out of the lands of Misak. The Mosul and Kirkuk were on the top of the list of irredenta should the language have a word for that.

Ninety-two years later, the fight against Daesh in Mosul flamed the old fears Peters ignited. The coalition forces - with the help of Iran-supported Shiite militia - looked like they were doing what Peters suggested. The people of Turkey brushed the dust off from this map simply because the powers seem to be drawing maps yet again.