Pedophiles: Monsters in our midst 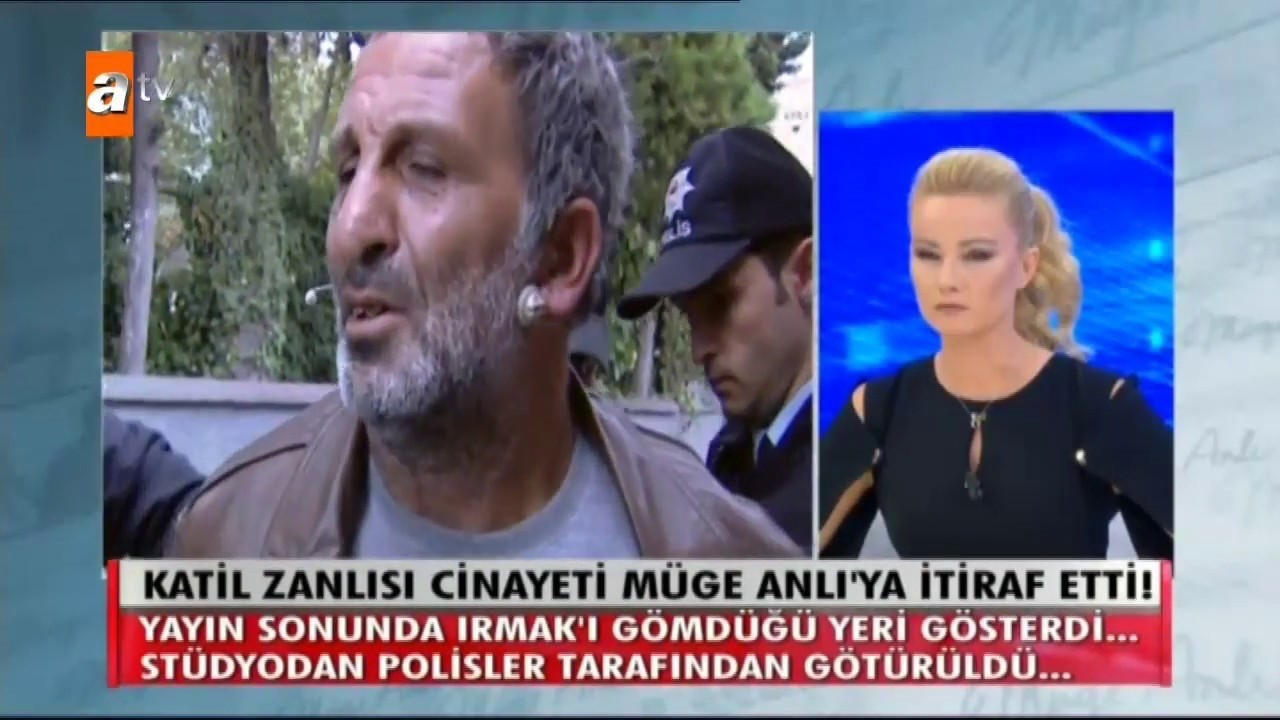 The unexpected confession of a 42-year-old man on live television to raping and murdering three year-old Irmak Kupal has once again reminded us that pedophiles are not always strangers. On the contrary, many cases and reports show that they are usually friends, family and neighbors – in other words, people known to us

On Sept. 23, Turkey was outraged and horrified to hear the rape and murder of a toddler. The lifeless body of Irmak Kupal, aged 3.5, was found buried 1.5 meters underground in a vineyard in the Alaşehir district of Aegean Manisa province. According to autopsy reports, the toddler was raped and murdered by asphyxiation.

A month after the incident, on Oct. 21, the daily TV program "Müge Anlı ile Tatlı Sert" broadcast on channel ATV hosted by investigative journalist Müge Anlı was on a commercial break. Anlı, suspicious of the show's guest Himmet Aktürk, 42, a waste collector, left her microphone turned on backstage. Aktürk suddenly started to stutter and cry while talking about a blanket with blood and hair. And then, he confessed on national television his brutal and repulsive crime against his neighbor, Kupal.

"I suffocated her. When they started searching homes, I placed her body in my scrap cart. I first threw the body in a garbage container then bought myself a sujuk sandwich and returned home. I went to the garbage container again at 12:00 a.m., but the trash had not been collected that day. Scared that they would find the body there, I threw the sack with the body over my shoulder and took it 3 kilometers away where the vineyard houses are. There, I dug the ground with my bare hands and buried her. Then I went back home and started cleaning up," is how Aktürk explained how he tried to cover his tracks. Then to justify the horrific act he said, "I can't sleep with other women. I don't have money [to pay for a prostitute]." Crying on live television during his confession more so because of the fear of being locked up in prison rather than out of guilt for Kupal's murder, Aktürk said, "They will beat me [in prison]," and requested to be put in a separate room.

Sexual crimes of all forms committed against victims of all types are evil and heinous offences. However, when children are in this equation, the criminal act becomes more abhorrent and outrageous. These violent acts are met with absolute fury by society and make one's blood boil. Should someone who has sexually violated and murdered a child be forgiven? Most will surely say no.

It is an unfortunate incident that sexual crimes are always underreported. In the cases of pedophilia, unless the child is murdered after the rape, we also may not hear about these unspeakable crimes committed against children who cannot voice them for various reasons. Fortunately, when such cases of pedophilia do come to the attention of the media, the society and governments attempt to address such concerns with awareness, prevention, treatment and a call for severer sentencing.

Sadly, pedophiles are not always strangers who we have generally consider as dirty old men walking in trench coats, watching unsuspecting children and exposing themselves to them at the park. On the contrary, according to many cases and reports, the perpetrators of such crimes are usually friends, family and neighbors: In other words, people known to us. However, this does not mean that "stranger danger" is not out there.

It is an unfortunate incident that sexual crimes are always underreported. In the cases of pedophilia, unless the child is murdered after the rape, we may not hear about these unspeakable crimes committed against children who cannot voice them for various reasons. Fortunately, when such cases of pedophilia do come to the attention of the media, the society and governments attempt to address such concerns with awareness, prevention, treatment and a call for severer sentencing.

In general, research on pedophiles has proven that sexual attraction toward children begins during their puberty years. However, pedophiles who have actually committed offences against children tend to fit in the older adult age range, between 40-70 years. According to statistics, it is evident that pedophiles commit their crimes during their later years compared to other sexual offenders. This however, is not the case with pedophilic women. Although cases of pedophilia committed by women are low, researchers believe it is due to the underreporting of such crimes. On the other hand, pedophilic female offenders tend to engage in these sexual crimes at a young age, at around 22-33 years old and almost always suffer from other forms of psychiatric or personality disorders such as depression, substance abuse, borderline and antisocial disorders.

Unfortunately, there is no clear-cut definition and description of what a pedophile looks like. According to scientific research, there are different categories of pedophiles where some may be exclusive pedophiles, when they are "exclusively" attracted to children or nonexclusive pedophiles who may be attracted to both children and adults. Furthermore, it is also difficult to deliver a concrete personality pattern for pedophiles because of the various subgroups they consist of. However, a majority of pedophiles are people with personality disorders and who have feelings of inferiority, experience loneliness and isolation, have low self-esteem and are emotionally immature. Although these offenders may have problems with interpersonal relationships, many of them will get married at some point in their lives.

Each time we hear of a violent crime of pedophilia on the news, the first questions we also hear are whether pedophiles are born that way or they choose to be pedophiles. Scientific research has claimed that pedophiles suffer from certain neurodevelopmental, neurochemical perturbations as well as environmental and social factors. Some of these brain damages are also claimed to have resulted from life experiences such as physical abuse and sexual victimization themselves as children, supporting the "victim-to-abuser cycle." Learning difficulties, repetitions of grades in school, employment status are also salient features that seem to arise in the studies of profiling pedophiles.

Is it possible to treat and cure pedophiles? There is no definite answer to this question. Many countries throughout the world have implemented various forms of treatment for sexual offenders. Whether it be treatments of pharmacology, chemical castration, psychotherapy, the main purpose of such treatments is to attempt to prevent recidivism against children rather than altering the sexual orientation toward children. Unfortunately, there have been cases where temporary chemical castration treatments were reversed and offenders continued to abuse again. Such treatments also need complete commitment, together with cognitive based treatments and continuous monitoring and attempt to recondition the sexual orientation of the offenders away from children.

Being on the lookout for "stranger danger," cutting testosterone levels through pharmacological treatments are surely ways to control and hinder possible future crimes up to a certain extent. However, the burden of responsibility in protecting our children also lies on the shoulders of families and societies. Pedophiles gain the cooperation of children using force or promises and bribes for candy. Just like in the case of Kupal, these forms of crimes are mostly situational offences. It points to evidence of an opportunistic predator, who moves on spur-of-the-moment impulses and advances at the available and vulnerable child. We need to educate our children that we do not take any bribes from people. We need them to understand that it is inappropriate behavior if they do not feel comfortable in giving cuddles and kisses, even if they are family members. We need to teach our family and friends that they also should stop using these forms of communication with our children.

Pedophilia is a global problem that needs to be addressed at all levels in society. Medical and legal communities need to work closely together in paving the way for further research into this disorder as well as the treatments for both offenders and victims. Legal systems and governments can consider tougher sentences and the loopholes in our criminal justice systems that concern sex offenders who come before the law. Families also have a tremendous role to play in educating their children of what are appropriate forms of physical contact with people. We need our children to understand that absolutely no individual – even if they may be family members – have a right to trespass their body. Children need to be empowered about their bodies. As parents, the most important step to prevent sexual violence is to have a strong relationship and create an environment where parents and children are confident and comfortable to communicate all matters. We need to encourage children to talk to us of any incident that makes them feel uncomfortable. The inability to create an atmosphere of communication is one of the reasons why children do not report sexual abuse. Listen to them and encourage them to share unsafe secrets. Know what your children are doing at all times. We need to ensure that our children are not "easy" and "vulnerable" victims to the monsters in our midst. A sexual predator will always keep away from confident children who can "yell and tell." The power to stop abuse is in our hands.

* Hatice Han Er was born in Melbourne, Australia. She has a BA from La Trobe University, a postgraduate degree in Education from RMIT University and an MA in Criminology and Criminal Justice from Griffith University. She currently lives in Istanbul, Turkey.