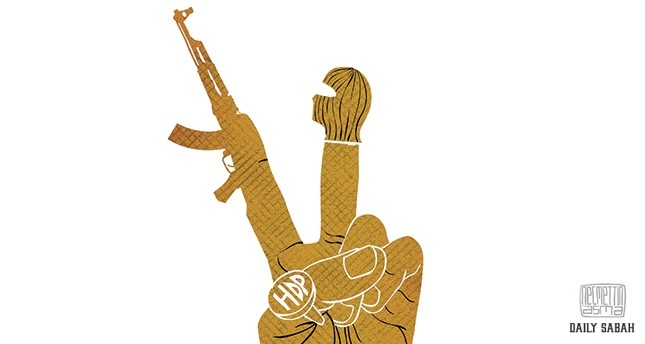 The PKK's militarized network in the region challenges the state's power and the HDP and other PKK-licensed political parties freely determine their own candidates without any popular, democratic input

In political science classes, students learn that if there were one and only one reason for the American Revolution, it would be the English Parliament's imposition of taxes on the American colonies for imports and exports. The colonists were being deprived of a historic right of voting and right to run for office in the parliamentary elections. The 1689 Bill of Rights had forbidden the imposition of taxes without the consent of Parliament. Since the colonists had no representation in Parliament, they said the taxes violated the guaranteed Rights of Englishmen. Hence the battle cry of the Independence War: No Taxation Without Representation.I carried these words on my license plate for more than a decade and later on my bumper sticker for two decades! (I supported the voting rights of citizens in the District of Columbia.)

﻿So the idea of participation in an election by voting and being voted for became the foundation stone for a libertarian society. If you wish to maximize autonomy and freedom of choice, emphasize political freedom, voluntary association, and uphold the primacy of individual judgment, all you need to do is build a ballot box; print some small papers with the names of the candidates, prepare a list of people eligible to vote; and set a date for voting. Of course if one, or two or more groups of voters get together and organize into what Maurice Duverger, a French jurist, sociologist and politician calls a multi-party system, that would be the icing on the cake. As the Duverger's Law states there are strong correlations between the election system and parties, as well as the party systems and type of representation. For him and for all libertarian philosophers, the linchpin of all those relationships that makes the ballots, ballot boxes and voter lists work is freedom: Voters must have only their own motivations in supporting candidates. Parties have an important role as long-term coordination devices. Italian political theorist Giovanni Sartori showed that this coordination works if entering this system is also free. That is anybody willing to spend his (or others') money in organizing a political party should be able to do so. Only the ballot systems should determine the number of political parties. They say, for example, the simple majority system (first past the post gets elected in a single-member districts) tends to favor a two-party system; and the proportional representation tends to favor multiparty system. Sartori says the freedom of a party system warrants the voter freedom to choose as well as candidate eligibility.

When Indira Gandhi was assassinated in 1984, some thought that it was an "isolated incident." In fact, it turned to be a part of "conscious attempt by key figures in the ruling Indian National Congress (party) to use violence to win elections." An international investigation showed that a group in the party propped up a radical Sikh leader to splinter it. Pakistan, Burma, Libya (before and after Qadhafi), many Latin American countries, the United States of America (yes, the good old U.S. of A.), have had what political scientists today call "militarized elections." Don't confuse this with election violence: Those armed groups have political roles; they may enjoy the government protection, even foreign assistance. Many authors wrote about the militarized elections in Iraq, Lebanon and the Philippines where armed factions intertwine with mainstream politics. Paul Staniland of the University of Chicago in his 2015 article points at the need of new concepts, theories and evidence to understand these politics.

Good evidence may come from the Kurdish politics in southeastern Turkey, Northern Iraq and Syria. The major mistake the Western journalists make when reporting on the elections in these countries is that they do not see the true nature of politics in the region.

The presence of the PKK armed terror organization of Abdullah Ocalan in Turkey and Syria poses challenges to foreign observers trying to find out the true nature of democratization that the elections are supposed to bring about. In Iraq, it is comparatively easy: the clan-based (thus armed) political parties - KDP of Barzani and thePUK of Talabani - and their delicate balance of power guaranteed a multi-party system for the region in a very unique way. Still the multitudes of clan-members are cognizant of the militarized election; yet Kurdistan Islamic Union of Salahhudin Bahauddin, and Movement for Change (Gorran movement) of Nawshirwan Mustafa have actually participated in free elections and now represented in the regional and national parliaments.Compared to Iraqi multi-party system, the number of parties in southeastern Turkey and northern Syria could be misleading. The Peoples' Democratic Party (HDP) in Turkey and Democratic Union Party (PYD) in Syria enjoy a virtual monopoly in Kurdish politics. The Rights and Freedoms Party (HAK-PAR) in Turkey, and 4 other parties in Syria are actually the victims of the PKK's monopoly in elections. In other words these elections are not producing any representation for Kurdish people in Turkey and Syria. The presence of an armed group, and its known support for some political parties make election results predetermined and those parties the pawns of the PKK leadership.

In Syria, the PYD, the PKK's extension in the area created its own borders easily because of the ongoing civil war, and held its own elections. It allowed whomever it wished to participate in the sham elections. Since there is central government control over the territories occupied by the PYD, it was free to set up its own patronage networks.

The same can be said about the Turkish southeast. Unlike Iraq and Syria there is a strong central government presence in the area but the PKK's militarized network is in place and it challenges the state power. There is no candidate eligibility for the people; HDP and other PKK-licensed political parties freely determine their own candidates without any popular, democratic input. There has been not one single dissident voice in HDP and those erected by PKK before it who had been able to get reelected. Virtual unknowns became party candidates in general and local elections. People who could not speak Turkish or Kurdish became party representatives in Turkey's national parliament or local municipalities; but they never became the representatives of the Kurdish people.

We know by experience for the last 40 years and 12 general elections in which Kurdish independents (supported by the PKK) or Kurdish parties participated could not be considered free and democratic from the Kurdish voters' perspectives either. They were reminded by the PKK posters that if the elections did not produce the "right results, there would be blood running from your kitchen faucets." Many villages received written notices that if there were one single vote to the other parties, they would be razed from the face of the earth.

Professor Staniland, draw attention to the way non-state armed groups (terrorists in other words) shaping political culture: it is counterproductive from democratic point-of-view and confusing for the Westerner observers. If you look at the Western media evaluations of Turkey's HDP and U.S. official insistence on Syria's PYD as political and military stakeholder, you see that it is confusing, indeed.