Why does opposition MHP support the presidential system? 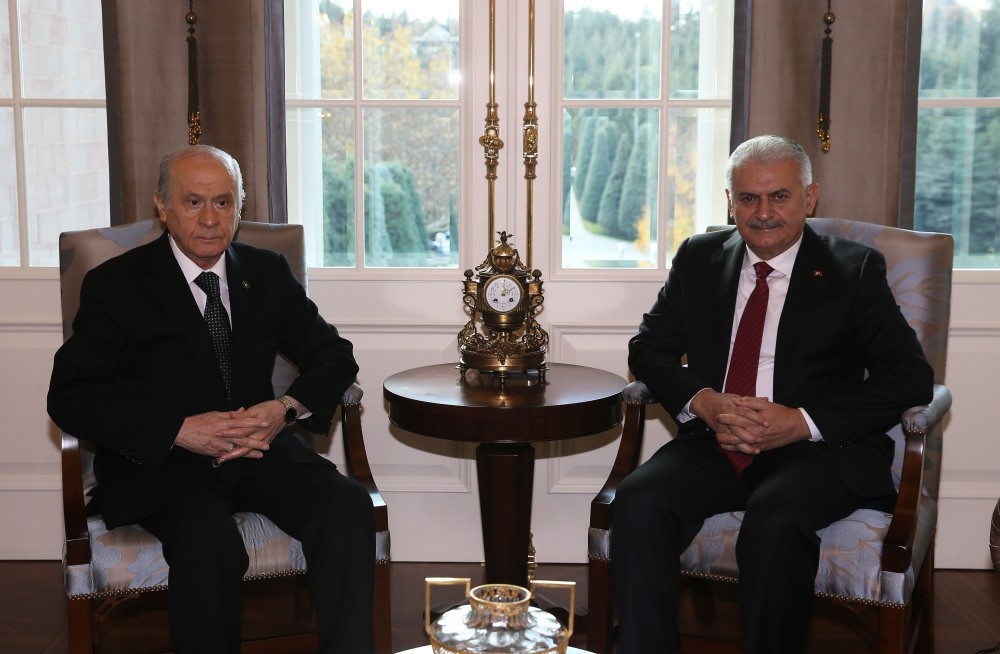 Prime Minister Binali Yu0131ldu0131ru0131m and opposition MHPu2019s Chairman Devlet Bahu00e7eli have agreed on the outlines of a constitutional reform package that will pave the way for replacing the parliamentary system with a presidential one.
by Sami Orçun Ersay Nov 12, 2016 12:00 am

The opposition in Turkey has gradually realized that the ongoing incidents in this region can be handled solely by a strong leadership, with the failed July 15 coup attempt, the escalation of PKK attacks and the neighboring proxy wars making it mandatory

Prime Minister Binali Yıldırım and Nationalist Movement Party (MHP) Chairman Devlet Bahçeli discussed the presidential system at a meeting, and the first outcome was positively accepted by the two parties. Bahçeli's remarks on the ongoing presidential system debate are of critically importance for two reasons: First of all, it was the first time that, although reluctantly, system change was brought up by a political party other than the Justice and Development Party (AK Party). Secondly, it was a sign that the country was turning back to its "default settings" and the usual agenda, following the coup attempt of July 15 and executive laws enacted by the emergency regime in its aftermath. In short, Bahçeli expressed his support for the parliamentary system and added that President Erdoğan should retreat "to constitutional boundaries," otherwise a referendum should be held so that people can decide on the presidential system. I will look into how the MHP reinforces the presidential system in the rubrics:

MHP as a state party with 'state solemnity'

"State solemnity" prioritizes a governing/managing state that consists of rules and, by definition, means immutability and stability. It considers the state above society and gives priority to its relations with society to maintain this position. The MHP has designed its policies over the last 20 years drawing on the pattern of state solemnity and in a manner abiding by the Constitution, rules and rooted practices. Accordingly, the party holds a vision of political regime in which the functions, duties and authorities of the president, government and opposition are defined, and all of the mentioned bodies work up to those duties and authorities. In other words, for the MHP, the president, although elected by the people with 52 percent, must be like 10th President Necdet Sezer in terms of not revealing a color or an odor. For the presidency, the MHP advocates a symbolic post tasked with arbitration. Due to the "secular divinity" the MHP has endorsed, the person in the top office representing the "sacred" Turkish people should emphasize the supremacy of the post rather than himself. In this context, the MHP views the position of Erdoğan only through the lens of the "secular divinity set" that also includes a vision of the presidency, as a matter of constitutional law. However, the party does not take into account actual politics and the Erdoğan phenomenon. Therefore, the MHP initially focuses on whether the existing system abides by the Constitution, no matter if it sides with the parliamentarian system or unwillingly supports a presidential system. If not, it strives for constitutionality. The party's effort to combine word-by-word the state's positions in actual politics and the legal/formal realm signifies the state solemnity vein in the MHP.

Lands in conflict, security regimes and the hopes for a strong administration

It would be reasonable to say that the second reason the MHP brought the issue to the national agenda is the extraordinary security conditions prevalent inside and outside Turkey. The opposition is gradually realizing that the situation ongoing in countries neighboring Turkey can only be handled by strong leadership for the following reasons: The failed coup of July 15 and its aftermath, the escalation of the PKK attacks and the neighboring ongoing proxy wars in Syria and Iraq in which Turkey is both directly and indirectly involved. Accordingly, the Oct. 11 remarks by Bahçeli are of critical importance:

"Internal and external security problems are worsening, and the circle of animosity that surrounds our land is narrowing. It is crucial that it is a priority for all of us to break through this siege and eliminate these risks and threats that put the peace and security of our land at stake. We should put off fossilized prejudices and shallow hostilities. We should make the way for and plan the future of our country. Turkey needs a new social contract and this responsibility is on the shoulders of all of us. For us, especially after July 15, this need has become even more urgent." If we look between the lines of Bahçeli's comments, it is interesting to see the emphasis on the need to make way for the country by redesigning the blocked political system, referencing July 15.

Bahçelİ's need for legitimacy and understanding of July 15

We can also link the MHP's attitude that makes way for the presidential system to the need for legitimacy from its leader. The party consolidated its power, gaining 80 deputies in Parliament after the June 7 election, but declined coalition offers and blocked the system. However, in the Nov. 1 election the MHP lost half of its deputies and Bahçeli's support from 60 percent of the party's delegates. If the coup attempt had not happened, Bahçeli most probably would be out of office. The two developments - loss of its constituents' support by refusing to take part in a possible coalition at the macro level and Bahçeli's insistence on leading the party without holding a convention and attending to the discontentment among party members at the micro level - brought his legitimacy into question. In this context, the MHP leader, who started to take serious decisions on behalf of the people and his constituents, has grown respectful to the national will after the failed coup was foiled by it on July 15. Thereby, the MHP and its leader left the responsibility to the people. By doing this, the party will gain ground in three aspects: The punishment of supporters like on Nov. 1 will be prevented by giving the responsibility of regime change to the people. Secondly, it will fix the shrunken legitimacy of Bahçeli who is believed to have not cared about the national will in the last year and lastly, the party's sincerity will be proven to the nation that stood up and defended their future.

The MHP declared that in case the AK Party offers the law proposal in which the first four articles of the Constitution and the unitary state are kept and a "one man" regime is off the agenda, they are willing to say yes to the proposal. In this context, given the vote transitivity between the two parties and ideological proximity, the AK Party will not prefer an inconsistent legal proposal with the MHP's sensitivities. In that case, the MHP will take a group decision to support the referendum law, and it will pass with slightly more votes than 340, which is the most probable scenario.