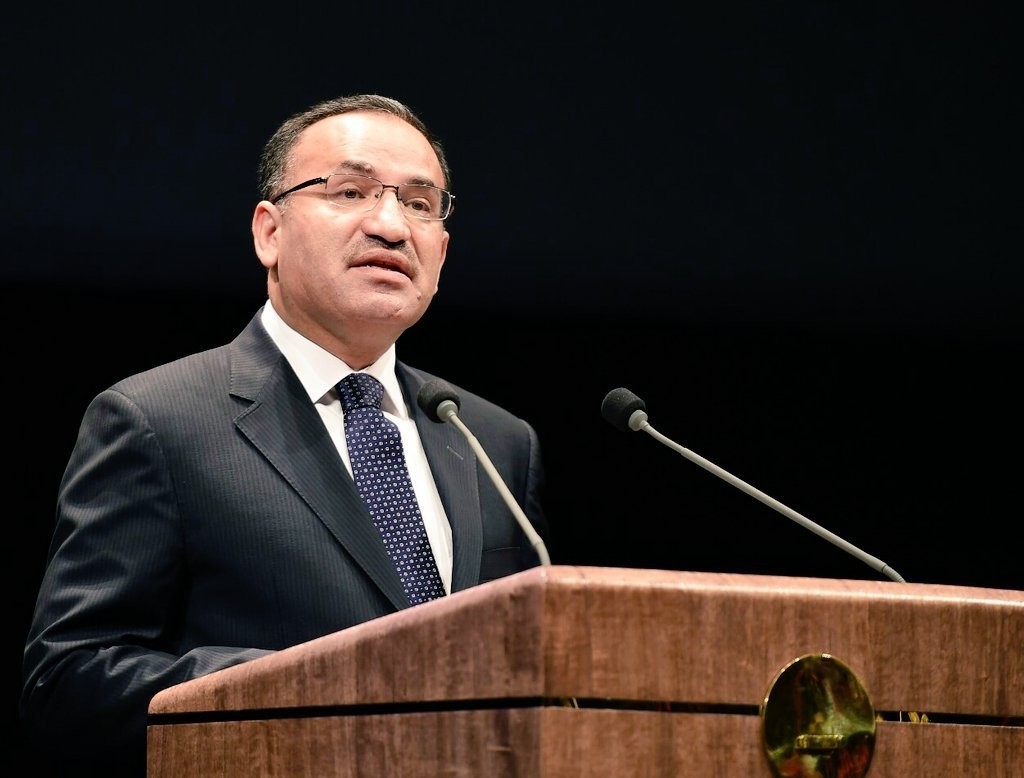 The EU’s Turkey Progress Report is a good sample of the EU’s stereotypical anti-Turkey propaganda, based on factual errors, hypocrisy and biases

The annual EU Turkey Progress Report was released on Nov. 9, 2016, by the European Commission.

An analysis of this year's report shows that biases against Turkey, claims of anti-Turkish circles and many groundless and unwarranted allegations are incorporated into the EU's Turkey Progress Report, particularly baseless allegations of the PKK terrorist organization and the Gülenist Terror Group (FETÖ), which are carrying out propaganda campaigns against Turkey. For instance, baseless and unwarranted allegations like political pressure on the judiciary are included in this year's report as well, without feeling a need to offer substantial evidence.

Again, the commission members who have drawn up the EU's Turkey Progress Report, hardly included any information conveyed to them by Turkish officials during meetings, instead taking a considerable part of allegations against Turkey as truth and adding them into the report, thus moving away from objectivity.

Although we have shared, in a very transparent manner, with EU officials during the preparation of this report as well, all the facts and truths regarding the EU's criticisms and allegations about both the independence of the judiciary and judicial practices, a lot of claims with various errors in facts are included in the report.

The July 15 coup attempt was made not only against democracy, the rule of law, the national will and those elected by the national will, but also against the fundamental values on which the EU itself is based. The struggle put up by the president, Parliament, prime minister, government and above all by 79 million Turkish people in unison is a struggle to protect democracy, rule of law, those elected by the national will and fundamental values on which the EU is based. However, the EU's Turkey Progress Report does not adequately cover or appreciate this epic struggle of the Turkish people and Turkey under the leadership of our president.

The report is a disgrace to those defending EU values, since it does not mention either the right to life of the 246 martyrs and the suffering of their relatives, the victimization of the 2,194 wounded and their families, or their legal rights, while expressing concerns and worries about the members of FETÖ, who have attempted to eliminate democracy, human rights, rule of law, national will and EU values.

We regard the report with regret and in astonishment since it refers to FETÖ as the "Gülen Movement" instead of describing it as a terrorist group. What would EU member states have felt if there had been an assassination attempt on an EU member's president and his family, if its parliament and presidential palace had been bombed, if tanks had been used against people, if jets had dropped bombs and helicopters opened fire, if civilians had been shot indiscriminately, with 246 of them ending up dead and 2,194 others wounded? What would EU have members felt if Turkey had protected the terrorist group that was directly responsible for these attacks, or refrained from labeling it a terrorist group as the progress report does? The EU's progress report referring to this bloody terrorist group as the "Gülen Movement" does not alter the fact that it is essentially a terrorist group.

The report criticizes the removal from profession of and prosecution against FETÖ-affiliated judges and prosecutors. Turkey is a democratic state of law. The judicial power is used by independent courts on behalf of the Turkish people. According to Article 138 of the Constitution, judges are independent while carrying out their duties, they render their decisions in accordance with the Constitution, law, and their personal conviction conforming to the law. No organ, authority, office or individual may give orders or instructions to courts or judges relating to the exercise of judicial power, send them circulars, or make recommendations or suggestions. The legal guarantee of judges and prosecutors is an important safeguard intended to ensure that judges and prosecutors perform their duties independently and impartially, free from fear, reprisal and pressure and concern of any kind, in a courageous and fair manner. It is a sine qua non for the independence and impartiality of the judiciary.

FETÖ has inflicted enormous damage on the state, the nation, the legislative, the executive, the judiciary, the military, the police, and every branch of government. Without doubt, the greatest damage was wrought on the judiciary. It has undermined our nation's trust in the judiciary and its confidence in justice. It has destroyed the rule of law. It has caused some judges and prosecutors to lose their competence to perform their duties independently and impartially.

The Supreme Board of Judges and Prosecutors (HSYK), which was established and exercises its functions in accordance with the principles of the independence of courts and the security of tenure of judges, represents the most important safeguard to protect the independence and impartiality of the judiciary. It is the HSYK's principal duty to declare those who lost the competence to act as independent and impartial members of the judiciary unfit to stay in the profession. The HSYK acting against this stipulation would mean a failure to perform its constitutional duty. Decisions by the HSYK, under a decree issued after the July 15 coup attempt, to declare some judges and prosecutors unfit to stay in the profession represent just the performance of this constitutional duty in accordance with the principles of the state of law. What the HSYK does amount to protecting the independence and impartiality of the judiciary, a fundamental value of the EU, and the rule of law. Again, these decisions aim to prevent FETÖ from hijacking Turkey's judiciary and maintain the judiciary's identity as essentially the people's judiciary. With these decisions, the HSYK has not only protected the independence and impartiality of the judiciary but also taken an important step toward restoring confidence in the judiciary. It is unacceptable that the HSYK's efforts toward maintaining and protecting the fundamental values of the EU are criticized instead of being duly appreciated.

The report expresses worry about the adoption of a law lifting legislative immunity and the ensuing detention and arrest of several Peoples' Democratic Party (HDP) deputies. The constitutional change concerning the time-limitation or removal of legislative immunity makes no discrimination among political parties and provides for the lifting of immunities with regard to all deputies who have cases for immunity removal against them; the arrangement conforms to the Constitution, fundamental human rights and principles of universal law. Since the provisional clause on the lifting of legislative immunity removes the immunity shield granted by the Constitution, the HDP deputies have been subjected to standard legal procedure in accordance with the principle of equality. There is no conflict with the Constitution here.

Turkey is a state of law and all citizens are legally obliged to give statements once public prosecutors or courts summon them. No person has the liberty to ignore calls by judicial bodies to give such statements. Yet, some deputies have disregarded and even defied public prosecutors or court summons, while judicial bodies have conformed to and applied the Constitution and the laws.

The report claims, with particular emphasis on the proportionality of measures and the limitation of access to judicial remedies, that there are complications concerning the decrees issued under the state of emergency that was declared after the coup attempt. Measures being taken under the state of emergency do not cause any change in citizens' daily lives and on fundamental rights and freedoms, put no restrictions that may affect everyday life. Measures taken have been confined only to issues necessitated by the state of emergency. There is strict conformity to the principles of absolute necessity and proportionality, as required by Article 15 of the Constitution of the Turkish Republic. Measures are taken only to the extent of meeting the needs of the situation, and in proportion with the current crisis faced by administrative bodies.

Regarding torture and ill-treatment after the coup attempt of July 15, there are again abstract and generalized expressions (like "serious concerns"). I should clearly say that claims of torture against the post-coup attempt detainees do not reflect the truth. On every occasion, we have informed EU officials of our zero-tolerance policies against torture and ill-treatment in Turkish prisons and penal institutions; we have repeatedly notified them we will do the necessary examinations and investigations in case we are given tangible information and data. Otherwise, we do not accept ill-intended and ungrounded accusations. To prevent torture and ill-treatment, all detentions require a forensic report in our country. Therefore, we deem the above accusations as part of the negative propaganda and campaign that some circles have started against Turkey. We consider official reports, which include such accusations without taking into account Turkish authorities' views and assessments, as ill-intended.

The document reports there is a sharp increase in the number of detainees and arrestees, penal institutions are alarmingly crammed, and the number of psychologists, social workers and sociologists are insufficient. Under the circumstances of an attempted coup, the increase in numbers is only normal. On the other hand, despite the extraordinary increase, the European Prison Rules and the CPT (The European Committee for the Prevention of Torture) are observed, and arrestees and convicts enjoy higher standards than the living space and shelter conditions provided by the ECtHR and the U.N. Mandela Rules.In 2005, radical reforms were carried out in the penal system regulations, which also resulted in the integration of psychosocial services to a modernized Turkish penal system. In this context, increasingly more psychologists and social service experts have been employed to safeguard the fundamental purpose of rehabilitation of inmates, knowing that the enforcement of a sentence is not just the locking up of arrestees and convicts. Again, IPA projects (the Model Prison Project, YARDM, DEPAR, Improvement of Enforcement Services in Prisons-Twinning, et cetera) carried out by national bodies or jointly with EU organizations have helped achieving significant improvements in strengthening psychosocial services and dynamic security elements, along with an increase in capacity.

The fact that the EU report contains factual errors is a clear indication that it is biased and casually written. It states that the declaration of assets is obligatory for judges and not for public prosecutors, whereas that procedure is mandatory for all public officials. Prosecutors are public officials and they are not excluded here.

The Turkish Republic has always welcomed and benefited from objective, reasonable and constructive criticism expressed by international organizations and bodies. However, it is not possible to accept the analyses and suggestions of the recent report, which is prejudiced, subjective and far from true.