Why would Trump win the elections in Turkey? 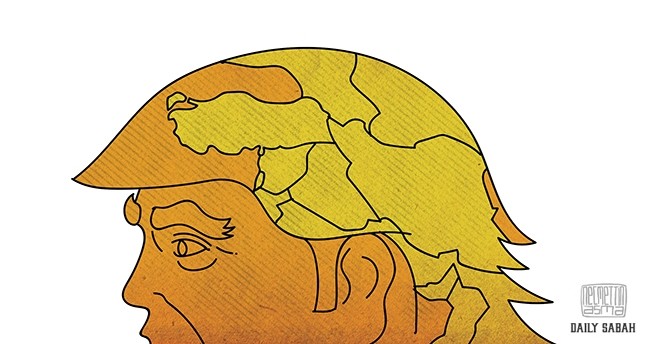 Turkish-American relations have gone through perhaps the tensest period ever during Obama's term but ironically Trump has expressed opinions, particularly about FETÖ and the Middle East, which were much closer to Turkey's theses

The U.S., the world's greatest economic, political and military power, elected Donald Trump as its 45th president. In a world rife with serious problems, the U.S. is among the countries with one of the best-functioning democracies. This country has elected its president through a time-tested but seemingly complicated electoral system in a transparent manner. Trump's rival and the odds-on favorite Hillary Clinton, while barely hiding her disappointment, called Trump to wish him success and even offered to work with him. On the other hand, Trump expressed a willingness to cooperate with President Barack Obama.

Of course, the election process was a period of unprecedented polarization in U.S. history, reaching ever-new lows and harshness, with disproportionate forces involved. The media and almost every lobby group carried out an open campaign to get Clinton elected. Yes, polling companies failed to predict the outcome, but this failure also contained a hint of manipulation in favor of Clinton.

Yes, Trump's election discourse was highly controversial and sufficiently grotesque to scare immigrants and Muslims. But Trump became so isolated and struggled against such a disproportionate power alliance, including his own party, that he was inevitably perceived as a victim.

Interestingly enough, despite Trump's many inflammatory remarks that are unpalatable to Turkish people, if he had run in the elections in Turkey, I think he would have won by receiving around 70 percent of the vote. Of course, this is just irony. However, it suggests the real tendency of Turkish public opinion about the U.S. elections. But why is it so?

I believe that the first reason is the great disappointment Obama has proved to Muslims. The election of a black, African-American president for the first time in the U.S. was perceived as the end of racism. Again, it raised hope that the world's superpower, which shapes global policies, would launch an opening to Muslims. Indeed, Obama made his first visits to Egypt and Turkey and delivered speeches replete with a large dose of empathy. This provided a glimmer of hope for Muslims living in the West, who have to live under difficult circumstances due to Islamophobia rising across the world, and for Muslims living in the East, who live in a hell on earth. Naturally, that a president is black and his family's origins trace to Kenya has not rendered these expectations realistic. But what played out was a significant change.

However, these hopes have not materialized. Comparing to 2008, Muslims in both the West and the East are much worse off. Obama went down in history as the president who deported the most immigrants (2.5 million) ever. Obama's term in office has been characterized by indecision and vacillation, particularly in relation to Syria and Iraq, with the ensuing vacuum eventually filled by Russia, Assad, the PKK and Daesh.

The U.S. chose the PKK as a partner instead of working with Turkey, NATO's second largest military power and a crucial ally, in redesigning its Middle East policies. The U.S. has allowed and helped the People's Protection Units (YPG) create a terror corridor along Turkey's southern border despite its objections and warnings though the Democratic Union Party (PYD) and the YPG are direct offshoots of the PKK, which ended the peace process in Turkey in return for the promise of a statelet in Syria, leading to the deaths of thousands of people. Unfortunately, the same is also true for Iraq. For five years, Turkey has faced U.S. feet-dragging on creating a no-fly and safe zone in Syria. Although the U.S. has pledged that PYD forces wouldn't remain in Manbij, it reneged on its promise.

Thirdly, in parallel with the Iran nuclear deal, the U.S. has followed a strategy that allowed Iran to build a Shiite arc that will make the sectarian conflict in Iraq and Syria permanent. That this arc joins a PKK corridor that encircles Turkey from its southeast to the Mediterranean coast represents an existential problem for Turkey was not and couldn't be understood.

And then there is the matter of the Gülenist Terror Group (FETÖ). This organization attempted to stage a coup disguised as judicial investigation on Dec. 17-25, 2013, with its members nested in the judiciary, police and intelligence and tried to topple President Recep Tayyip Erdoğan's government through falsified evidence, illegal wiretaps, and doctored voice recordings. The same organization also leaked voice recordings of a meeting between the National Intelligence Organization (MİT) and the PKK in Oslo and tried to accuse Erdoğan of "treason." But after all these efforts came to nothing, it aimed for a deathblow and launched a bloody coup attempt through all its members that had infiltrated government agencies and the military. And sadly, Turkey has encountered annoying indifference again from the U.S., which it sees as its closest ally, about this issue.

In fact, Turkish-American relations have gone through perhaps the tensest period ever during Obama's term. The U.S. has gone so far as to call Turkey's NATO membership into question. Presidential frontrunner Clinton's close links with FETÖ, donations from this organization to her campaign, and members of Gülenist terror cult being hosted at the White House after the July 15 coup attempt, which claimed the lives of 246 Turkish citizens, have all raised serious doubts and sparked negative reaction in Turkey. Clinton's signaling she would pursue Obama's policies even more determinedly and declaring she would continue to work with the PKK/PYD capped it all. It was thus predicted that relations with the U.S. would further deteriorate and even turn into a permanent crisis in the event of a Clinton win.

Meanwhile, Trump and his advisers expressed opinions, particularly about Gülen and the Middle East, which were much closer to Turkey's theses. They stated that the U.S. should rely on a sovereign state like Turkey instead of Iran, which sponsors terrorist organizations and stokes sectarian conflict in the Middle East.

Michael Flynn, a retired lieutenant general and national security adviser to newly elected U.S. president, Donald Trump, said, "We need to adjust our foreign policy to recognize Turkey as a priority." In a piece titled "Our ally Turkey is in crisis and needs our support" published in the political newspaper The Hill, Flynn, a possible candidate for the job of defense secretary in Trump's cabinet, wrote:

"It is unconscionable to militate against Turkey, our NATO ally, as Washington is hoodwinked by this masked source of terror and instability nestled comfortably in our own backyard in Pennsylvania. From Turkey's point of view, Washington is harboring Turkey's Osama bin Laden."

Flynn argues in his article that the U.S. has failed to understand Turkey's sensitivities during current President Obama's term, pointing to a need to adjust U.S. foreign policy to recognize Turkey as a priority.

Flynn also adds that the upcoming administration should give priority to Turkey in U.S. foreign policy. Stating, "We must begin with understanding that Turkey is vital to U.S. interests," Flynn points out, "Turkey is really our strongest ally against Daesh in Iraq and Syria, as well as a source of stability in the region."

Indeed, that's the right approach Turkey has expected from the U.S. But unfortunately, the Obama administration was totally at odds with Turkey on this matter. Consequently, since Turkish public opinion does not take a close interest in U.S. domestic politics, it has focused rather on potential policies of the candidates in regards to the Middle East and Turkey. As the policy position of the candidates took shape, Trump received greater sympathy. For nobody in Turkey, including President Erdoğan and the government, wants to see relations with the U.S. deteriorate. Obama's policies have represented such a gross violation of Turkey's red lines that it was virtually impossible for Turkey to show flexibility on these matters. Showing flexibility on such matters would amount to accepting apartition and a potential sectarian conflict. Obama has never understood this, and Clinton signaled she would pursue the same policies more determinedly. In such a case, it would become impossible for Turkey and the U.S. to remain as strategic partners, let alone allies, or friends. In fact, mistreating an important country like Turkey so badly regarding matters on which it couldn't show flexibility went down as Obama's foreign policy failure.

TURKEY'S VIEW ON THE U.S. AFTER TRUMP'S VICTORY

Of course, Trump has not taken office and started his presidency yet. But even Trump's vague promises have led to enormous optimism in Turkey. In other words, relations with Obama looked very bleak from Turkey's perspective.

We hope that Turkey and the U.S. will repair their relations quickly, establish cooperation, which is much needed in the world in general and in the Middle East in particular, and increase optimism. Turkey does not have an eye on either Iraqi or Syrian soil. Actually, Turkey defends the territorial integrity of both countries and argues for the creation of a sustainable political mechanism there. But it is also determined not to just watch any big power redesign the region through the PKK, Daesh or Iran. Turkey's allies need to understand that this is an issue of vital importance for it.Putting up a real fight against Daesh in Syria and Iraq without playing with their demographics and helping them to get back on their feet afterward is also very important for world peace. To prevent new versions of Daesh from appearing in the Middle East and other regions, instabilities and failed states that pave the way for terrorism should be eliminated. If Trump is sincere in his refusal to waste more dollars and the lives of U.S. soldiers in the Middle East, he needs to realize that he should work with Turkey for permanent peace.
Last Update: Nov 21, 2016 1:37 am
RELATED TOPICS