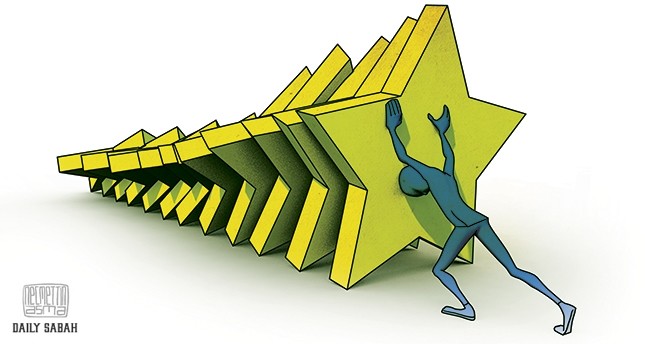 Be careful what you wish for is a warning that the EU should heed. But a recent Syria peace deal offer smacks of desperation with Brussels now panicking beyond anything we've seen before

Have we reached a point of supreme desperation in Brussels where its leaders are trying to start a war with Russia? It seems barely believable that the EU project is in such state of disrepair that its only hope of surviving is to create a massive diversion away from its own demise. In short, it needs a war where it asks EU countries to send their own armies, disingenuously attired with an EU armband so that Brussels can delude itself that it has both an EU army and a real foreign policy. In reality, it has neither of course.

Just look at the anti-Russian position its own parliament has taken in recent weeks and the kind of language that some members of Parliament are using. For the first time ever, we are seeing a really desperate situation emerging within the EU and, like a trapped animal, it is responding increasingly irrationally to its own crisis.

Russia has been identified as a real enemy to the stability of the project.

In fact, this is not new. Behind the scenes of the grey buildings in Brussels it has always been known within the higher echelons of the Commission and the parliament that Russia, particularly under President Vladimir Putin, is the real enemy to everything that the EU believes in, whether realistically or as a wet dream. Russia has showed the EU time and time again what it means to be a super power - the responsibilities and actions it has to take on a daily basis. In short, being a super power is about backing up promises and accepting responsibility as well as the limelight. The EU is not a super power. It is not even a test tube pilot project of one, but more of a talk shop where crafted words in speeches and press releases are supposed to fill the gaping hole.

Repeatedly Russia shows Brussels what it's all about and it must be humiliating for those who work in the cabinet of the 1 billion euro farcical European External Action Service, which has 140 "embassies" around the world and the staff to accommodate them.

There is long history of resentment of Russia's power by the EU, which is dangerous if not reckless. But we have seen repeatedly that Brussels is not remotely disturbed by stirring up a "cold war" between Russia and the West.

For the last 15 years the EU has regarded Russia as a real enemy to its own development as a so-called European super-state, a notion regularly mocked by Putin as laughable given that the EU "cannot even organize a single energy market" let alone actually put together a foreign policy, with an army and a mandate.

Energy dependency has always been the thorn in the side of Brussels as it has tried and failed to get Europe to release itself from the shackles of Russia's gas and oil. In 2007, there was an inertia in Brussels that the EU should look at restoring relations with the two chief rogue states in the Mediterranean - Algeria and Libya - so as to secure energy pipeline deals for mainland Europe.

Both plans failed spectacularly. The Libya venture, which even resulted in Moammar Gadhafi shaking hands with both Tony Blair and Nicolas Sarkozy, blew up spectacularly. Few can forget the grainy phone footage of Gadhafi's last minutes before he was shot in the head.

But there is no sign that the EU's foreign policy ambitions will do the same. The wet dream just continues in its folly. In 2008, Russia sent its troops into Georgia and the EU scolded Putin publicly. Putin's response shut up the yakking mongrels in Place Schuman almost immediately: "I have no problem with the words 'new cold war,'" he is reported to have said. In other words, "either take me on in the grown ups' game of super powers or shut up."

But the EU cannot shut up. It is the one mesmerizing, unfettered talent that it has. It does not stop spewing out tons of toxic garbage into the geopolitical theaters where Russia is dominant.

Would we have even had the Ukraine problem, for example, if it were not for the EU's relentless meddling in the internal affairs of a sovereign state? Brussels is like a child playing with a loaded gun. It cares not for the carnage it can emulate but only craves the satisfaction of the thrill. It dreams of bringing countries like the Ukraine into its influence as all other possible selling points Brussels has to its own members' voters have been exhausted. What started as a single market is failing abysmally; eurocrats are now quickly moving to build a super state and it looks to the former Soviet Union as a formidable example of how to go about it: completely manipulate the press and feed it fake news each day, build a strong authoritarian state, suppress liberty and free speech and build a strong army.

Just look at how the EU is trying to destroy Russia's own media outlet Russia Today. Just examine how the EU wishes to decentralize power away from Europe's capitals to unqualified, second rate bureaucrats in Brussels who have the mind-set of African despots, with their contempt of their own people's will.

The EU has not resolved the Cyprus problem, the war in the former Yugoslavia, the troubles of Northern Ireland or the Kosovo war - all intractable conflicts on its own doorstep, by its own people, which were dealt with by London and Washington in the end.

It has not even resolved the Syrian refugee crisis, when it had a perfect opportunity to do so with Turkey playing a key role in it, although Federica Mogherini's attempt at getting a UN backed plan to allow EU warships to bomb the mainland of Libya to stop the flow of migrants will go down in the history books as an EU official who will stop at nothing to keep her own career intact. Bombing civilians of a sovereign state simply because they don't prevent their countrymen boarding boats to take them to a safer land? Has the woman entirely lost her mind?

But the madness continues. And all the time, war is the inevitability which is appears is what the EU wants. How else can it convince a tired and weary public to extract even more money from national coffers to pay for it?

The EU's recent proposal in Northern Syria is the most desperate and ill- conceived plan it has ever had to date. It's not that the EU hasn't the authority from member states to make such pledges to the oppositions or the Syrian regime; it's also not that it has absolutely no way of implementing that all groups stick to the so-called deal; it's not even that the EU has absolutely no respect from any of the players in the Syrian war - which Brussels was reminded of recently when it was not even invited to the Syria peace talks.

No, the absurdity of the deal offered, is two-fold. Firstly, Assad would never accept it as he is now in too strong a position to accept a cash deal which would effectively take away huge parts of the country from his regime; and secondly that if the EU were to pull off this fanciful offer, it would present such a threat to Russia in Syria and the region that it would be effectively a declaration of war with Putin, which would fast track the need to create an EU army just months before the EU's credibility is going to take the mother of all hammering at the polls in France, Germany and the Netherlands, with many seasoned observers predicting that the EU is close to collapse if one of those ballots produces a populist leader.