﻿EU at the crossroads: Comply or die 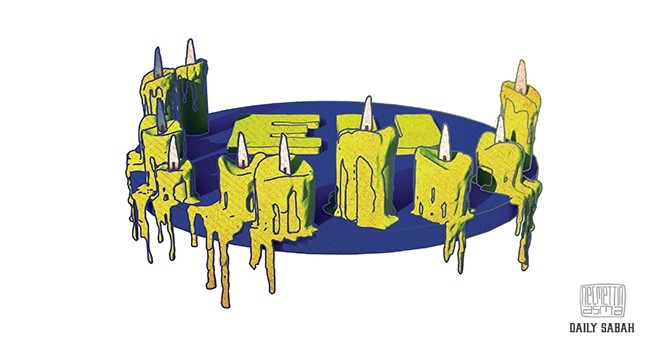 The European Project was an idea of supra-national identity. Now, countries want to self-govern, decide their own future and foreign, security policies

The EU and Turkey were never going to be a match made in heaven. Turkey's accession to the European Union was at the fringes of the EU's enlargement strategy. And for Turkey, accession to the EU was the last chapter in the long history of a national Westernization project dating back to Ottoman times. For many, behind all the economic arguments, Turkey's main objective was to become a member of the European club and get a quick and ultimate fix to its socio-cultural problems rather than joining an idealist Pan-European plan. Now, the accession has come to a halt, but not because Turkey is at a crossroads, as the high commissioner Federica Mogherini stated, but because the EU is. The EU is at a crossroads: It has to either choose to compromise what it stands for in terms of human rights and comply with the rise of intolerant anti-refugee, anti-Islamic sentiment across Europe, or break up and die.

Since the beginning of the refugee crisis Europe has not been acting in accordance with its own moral standards. Instead it keeps loading its responsibilities onto others. The wars in the Middle East and the refugee crisis, that are themselves directly caused by western policies, are perceived by the European populace almost as issues from another planet where Europe is absolutely free of responsibility. Hundreds of thousands of refugees, summoned by the German Chancellor Angela Merkel on a false promise, started dying on the way to Europe. Partly because, according to European human rights, if they were rescued on their journey then they would have the right to stay in Europe. And as the Schengen agreement states, if a carrier transports people without a visa, then the carrier is responsible for their return and pays a penalty. Therefore migrants can't travel by aircraft, boats, or trains. A chaotic mass movement of people was encouraged by EU leaders and that caused unforgettable tragedies on the shores of Turkey and in the waters of the Aegean. Turkey hosts nearly 3 million refugees on its own, while the EU, despite taking the moral high ground of a global human rights defender, granted protection to only 35 percent of the 1.3 million applications. When it comes to human rights the EU is good at talking the talk but does not walk the walk. The EU has failed spectacularly in dealing with the refugee crisis in every term. And Turkey is handling the situation with praiseworthy efforts while also dealing with domestic problems such as terror attacks and violent coup attempts. So why is the EU launching unprovoked attacks on Turkey instead of giving much needed support, and what is the genuine reason behind the recent suggestion to freeze the accession talks?

In Europe, anti-Islamic and xenophobic discourse is chiming with voters more than ever. Years of economic instability, terror, influx of migrants and the refugee crisis has pushed people into the arms of nationalists with easy sounding non-solutions to very complicated problems. People are frustrated and strong political resentment is seriously threatening the future of the EU as a union. By punishing a Muslim country that is in the process of entering Europe, the EU is trying to consolidate a divided Europe while ignoring the fact that by doing so it is hampering an important ally in the region. An ally that is needed more than ever, not only for the benefit of Europe, but also for the benefit of peace in the region. However, the EU is not in the state of mind to consider world peace or even Europe at the moment. Because the great ideal of the European Project, which is more important than Europe itself, is falling apart. The EU is going through an existential crisis. Once deemed the only hope for peace and prosperity in Europe, it is no longer relevant in the changing politics of the world and it is increasingly looking like a relic from the Cold War times.

Considering that recent European history is largely defined by the violence of its wars, scenes of the deaths of millions and systematic crimes against humanity, the idea of an interdependent union, just like the EU, makes sense. After the atrocities of World War II, European political thinkers came to the conclusion that post-war literature, anti-war discourse and mere good will would not be sufficient to prevent future wars. European economic interdependence was the answer to the endless conflicts. Modern warfare required plenty of coal and steel production, and handing control of these resources over to an international union would make a war between member countries materially impossible. However, since its foundation the EU has morphed into a political union more than the economic one it started out as. The core foundation that prevented nations from starting wars has been stretched to cover all social and political areas within the member countries. The EU aspired to become a United States of Europe mainly as a defense against the Russian threat coming through the Eastern Bloc. The ultra-nationalism that fueled the previous wars was suppressed with the supranational political discipline of the EU; and it worked as promised as an antidote to centuries of endless violence in Europe. So why is it falling apart now? Mainly because it is not based on a democratic system. Let's see how.

EU as an ambitious superstate entity

The idea of the EU is built on the subordination of the sovereignty of each member state. In that principle, the European Project as an idea is held above all the aspirations of individual European nations. This principle eventually started threatening the national and cultural identities. The nations of a continent with different languages, different cultures and significantly different ways of living are forced into a synthetic unity for the sole purpose of concentrating power. Eventually, the EU has developed the ambition to become a superstate that oppresses the national identity, sovereignty and economic freedom of each European nation. When the economic crisis hit the EU, the union was not as unified as it was before. Countries now want to self-govern, they want to decide their own future, their fiscal, foreign and security policies. The decision by Britain to withdraw from the EU was based on those reasons and it is feared by the EU that the rest of the union will also follow suit.

The EU was created by the political elite and technocrats and it was always detached from the daily realities of the people. It is built and run in such a complex way that the public does not understand how it works, let alone feel involved in its decisions. The three pillars of the EU, which was later merged into one, are blatantly anti-democratic bodies. For example the EU Commissioners are entirely unelected, yet the commission has the supreme power to introduce and change laws. The European Parliament is presented as the democratic body of the EU, but, as stated by the German Constitutional Court in 1993, the EU parliament lacks the potential of a democratic system. Because for a parliament to be democratic it has to have a "demos." In other words, for a parliament to be democratically representative it has to have a defined community, a population with shared priorities. In the case of the EU, the parliament has no direct representation of a defined population therefore is not democratic.

But the EU is not failing only as a democratic entity; it is also failing as an economic one. While Germany is enjoying the gains of the euro, the southern countries such as Spain, Italy and Greece are in debt traps and endless austerity programs. These countries don't have the power to bring reforms according to their needs and turn around the situation they are in. As the billionaire investor George Soros put it: "It's not a unity of equal states, it's a division between creditors (Germany) and debtors (southern countries, Italy and Greece). With the economic crises the creditors are in the position to make the rules and the decisions while the debtors are relegated to subordinates." The whole economic objective has become one of making Germany more powerful while the others are crushed under austerity plans and have no right to complain.

It is not hard to imagine that Turkey, if it was already a member, would suffer from the same economic consequences as Greece or Italy which are crushed and ignored by the union. The EU may have a series of different political agendas to freeze Turkey's accession process now. Regardless of that, Turkey should be apprehensive about joining the EU given the union has lost its relevance and become explicitly anti-democratic, where the majority of the members are functioning as trapped subjects to a high EU ideal rather than free and equal states joining forces for a mutual benefit. Turkey should be more hesitant than ever to join a union where sovereignty and self-rule is diminished under a bloated bureaucracy with its unelected and unaccountable decision makers and it's overreaching regulations. For a nation like, Turkey which has repeatedly showed that it values sovereignty, independence and national identity over anything else, the EU is and will be intrinsically unsuitable.

*A freelance journalist and reporter based in London

A freelance journalist and reporter based in London
Last Update: Dec 16, 2016 2:40 am
RELATED TOPICS