Turkey and Russia: From frozen relations to cooperat﻿ion 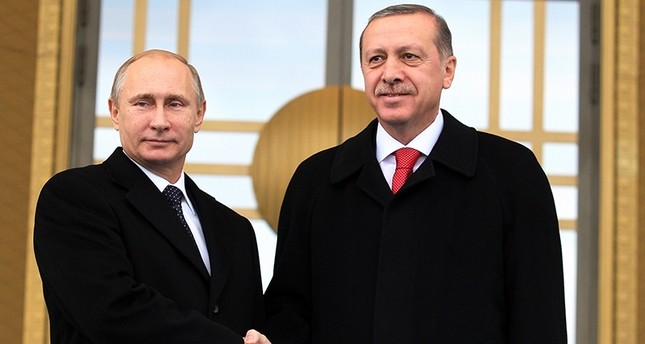 by Muhittin Ataman Dec 17, 2016 12:00 am
Currently, Turkish-Russian relations are active following a short period of tension. When analyzing the last two years of Turkish-Russian relations, some exceptional developments can be seen. Over the last three centuries, bilateral relations were best during the first decade of the 21st century until the Arab insurgencies negatively changed this relationship. Russian direct intervention in the Syrian crisis on Sept. 30, 2015, was the beginning of worsening bilateral relations with the two countries supporting warring sides, indirectly struggling against one another. However, when the Turkish Air Forces shot down a Russian jet in November 2015, bilateral relations (political, military and economic) were frozen. Additionally, due to Western countries' anti-Turkey policies, Turkey was isolated in the region.

The July 15 coup attempt in Turkey changed Turkey's internal and external settings, and Russian President Vladimir Putin has benefited from the new situation. While Western leaders kept silent during the coup attempt and its aftermath, Putin declared his strong support for President Recep Tayyip Erdoğan. Similarly, President Erdoğan tried to benefit from these developments and decided to visit Putin.

The two leaders held a strategic meeting in St. Petersburg on Aug. 9. While Russia wanted to reclaim its global role, Turkey tried to rid itself of international isolation. The two leaders agreed to initiate bilateral relations in almost all dimensions and to establish a trilateral (political, diplomatic and military) mechanism over the Syrian crisis. Relations began to soften. The second meeting between the two presidents was conducted on Sept. 3 during the G-20 Summit in Hangzhou, China. President Erdoğan was the first foreign leader that Putin visited upon his arrival. Despite praising cooperation between the two states, Erdoğan and Putin mainly focused on the energy sector.

On Oct. 10, the two leaders met for the third time in two months. Although Putin could have sent his minister, he personally came to Istanbul to attend the 23rd World Energy Summit, mainly to meet Erdoğan and speak about bilateral, regional and global issues face to face. The leaders agreed to re-initiate the Turkish Stream Project, which is expected to carry Russian natural gas to Europe through Turkey, instead of Ukraine.

Just before Prime Minister Binali Yıldırım's visit to Russia, Parliament ratified the TurkStream Project on Dec. 2. In Moscow, Yıldırım met his Russian counterpart Dmitry Medvedev, and the main focus was on the

Turkey and Russia have four main motives that maintain the bond of cooperation and dependence, as any change in Turkey influences Russian policy and vice versa. The main motive is the interdependence in the economy, taking into consideration that bilateral trade between the two countries is quite high. Before the jet crisis, Russia was Turkey›s second largest economic partner, after Germany. Trade, infrastructure, transportation, energy, agriculture and tourism are pivotal areas of cooperation. As could be seen from the meetings of the state leaders, the renewed Turkish Stream Project and the construction of the Akkuyu Nuclear Power Plant are the most important issues. Tourism, where Turkey enjoys a comparative advantage, is also a critical sector for Turkey.

The lack of trust toward the West is the second motive. For different reasons, both Turkey and Russia lost confidence in Western countries. European countries and the U.S., in particular, have been following a policy in the Middle East that is mainly detrimental to Turkish national interests. They have been supporting anti-Turkish violent sectarian and ethnic non-state actors, such as the Hashd al-Shaabi in Iraq and the PKK-affiliated Democratic Union Party (PYD) in Syria. Western countries have neglected security threats against their NATO ally, Turkey. On the other hand, Western countries have been trying to restrict Russian policy in the region. Russia confronts every Western country as a global "other" on every international platform. Thus, its "otherization" by the West is one of the reasons for its rapprochement toward Turkey.The third motive is their determined policy toward the Syrian crisis, as the only two real negotiators at the negotiating table. Unlike Western countries, which are reluctant to act on most of the developments and do not know who and what to support, Russia pursues a concrete policy that will allow it to remain in the Middle East and be influential in the Levant. Turkey has been firm about its position against the Assad regime and other violent non-state actors, such as the PYD and Daesh. Although Turkey and Russia have been supporting opposing sides, they see one another as the real negotiators; they are aware that they have to persuade one another to solve or at least manage the problem. This is why the U.S. was shut out of the planned round of negotiations between the Russian state and Syrian opposition groups hosted by Turkey in Ankara.

The last motive is the Turkish and Russian opposition to the world system. Both states have lost their confidence in global institutions such as the United Nations and its affiliated organizations. This conviction led them to develop new concepts and global institutions. Erdoğan's motto, "The world is bigger than five," and his call to trade in national currencies (rather than in the U.S. dollar) are two indications of Turkey's oppositionist position. Similarly, Putin has repeatedly declared that the world is not a unipolar system anymore. It seems that as long as the Western hegemons of the world remain in economic and political crises, this challenge will continue.

Without considering these four motives, it is impossible to properly analyze Turkish-Russian relations. Despite their divergences, the issues that bring both states together are more important, and this is why the tense situation between the two states has turned into a chance for cooperation.

Muhittin Ataman is Director of Foreign Policy Studies at SETA Foundation. He is a professor in the Department of International Relations at Social Sciences University of Ankara. Ataman is also the Editor-in-Chief of Insight Turkey.
Last Update: Dec 17, 2016 1:42 am
RELATED TOPICS