Iran Contra-diction: Obama's Middle East doctrine just a blip in history, as US goes back to Reagan-era geopolitics 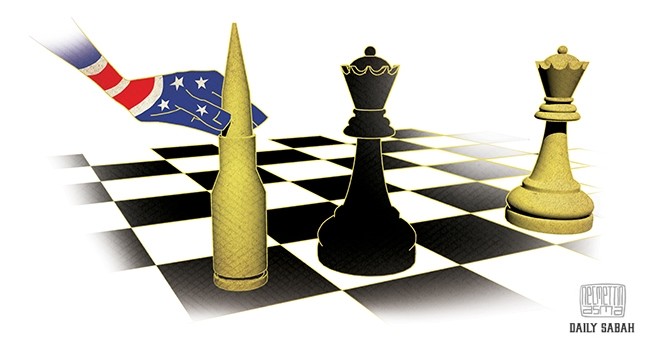 The clocks are being turned back and in the Middle East we will soon feel as though we are living in the 80s once again. Trump's new appointments are determined to over-simplify geopolitics and you win no points for guessing which country gets to wear the black cowboy hat and play the ‘baddie'

When George W Bush was confronted with the twin towers attack in New York in 2001 he reacted in what some considered to be a natural way, in that he brought into the White House older, retired advisors to his father who he knew and trusted. That group, led by Dick Cheney – which included Donald Rumsfeld and Paul Wolfowitz – all quickly made the world a simpler place for George W as they pointed out who were the bad guys in the Middle East which led to that infamous "axis of evil" speech.

We know what happened all too well next as Afghanistan and Iraq were remoulded into new failed states and Daesh was born.

Ironically, it was Dick Cheney who led George W on many leading issues in the Middle East and who was a key influencer on his father George Bush Sr. And one of Cheney's dreams, while in office, was that America should bomb Iran.

Fast forward to 2016 and it appears that Cheney is going to die an old man with his life complete.

Two key appointments expected to be made by Donald Trump in the Middle East, leaked in recent days, say a thousand words about which direction he will be taking in this part of the world – as both those appointments are cut from the same cloth as Cheney and his neoconservative pals in DC.

We are going back to the future with America now reverting to its 1980s foreign policy mandate, complete with bushy moustaches and wide lapels. Well, not quite. But the irony is alarming as it is comical. The very people who Trump lambasted for their Iraq campaign, he is now looking to for his key people in the region.

The rumors of Mike Huckabee getting the job as America's envoy to Israel, along with James "Mad Dog" Mattis expected to take the position of U.S. defense chief is deeply worrying for the Middle East as it holds out little hope for Iran ever finally merging itself with the rest of the Arab world, not to mention its own nuclear commitments ever being kept.

Both these individuals have an almost extremist view on the Iranian state and are staunchly pro-Israel, with Huckabee unable to recognize the Palestinians either as a people or a state and Mattis having a history in the region of fingering Iran as the enemy of both the U.S. and the West. Perhaps his comments about Iran were made at the beginning of the war in Syria against Daesh, but somebody really needs to update the General whose impressive Middle East section of his CV appears largely to involve killing a great many people and not heralding any inspiring diplomatic mantras.

Mattis did say that it was "fun killing people" when he addressed U.S. marines once, so perhaps we could consider him more the hands-on diplomat rather than the Obama 'soft' type. But he seriously needs to be briefed about the Middle East since he was last running the desk for Washington.

Mattis believes that Iran is the principal threat to the stability of the Middle East, ahead of al-Qaeda and Daesh: "I consider Daesh nothing more than an excuse for Iran to continue its mischief. Iran is not an enemy of Daesh. They have a lot to gain from the turmoil in the region that Daesh creates." On the Iran nuclear deal, although he sees it as a poor agreement, he believes there is now no way to tear it up, saying: "We are just going to have to recognize that we have an imperfect arms control agreement. Second, that what we achieved is a nuclear pause, not a nuclear halt". Mattis argues that the nuclear inspections may fail to prevent Iran from seeking to develop nuclear weapons, but that "[i]f nothing else at least we will have better targeting data if it comes to a fight in the future." Additionally, he criticizes U.S. President Barack Obama for being naive about Iranian intentions and Congress for being "pretty much absent" on last year's nuclear deal.

Perhaps he was right about Obama being naïve.

Mattis was ultimately fired by Obama and has recently received impressive write ups from many U.S. journalists as a good choice by Trump as the former marine stands above other military advisors as being smarter, largely based on the fact that he likes to read books.

Reading newspaper reports though about the war in Syria and Iraq might have given the general a different perspective on Iran, who few commentators and analysts – even those who hate Iran – can deny is doing most of the fighting on the ground against Daesh both in Aleppo and currently in Mosul, along with its own Lebanese proxy Hezbollah.

The world has changed since Mattis commanded a marine battalion in the Persian Gulf War in 1991. But it seems not for him, Trump and the Iranian hardliners in Tehran who all seemed to be stuck in this time warp which will undo the Iran nuclear deal and make this country the 'enemy' of both the Gulf Arab countries, Israel (of course) and the West. The EU, as well as London, will have to go along with this "back to basics" arrangement in the Middle East, leaving a number of harrowing questions which the finest Middle East think tank wasters in Washington cannot answer, not even if fake-news CNN gives them the script.

Will Iran tear up the Iran deal, delighting its ultra conservative hardliners who opposed it from the off? Will Trump's new administration maintain good relations with Russia despite demonizing Iran and take advice from Benjamin Netanyahu and the Saudis – who would both like a state of war to be declared on Iran?

Make no mistake. These appointments clearly spell out Trump's view of the Middle East and what Obama had wrecked, which he will now 'correct'. Empowering both Saudi Arabia and Israel and isolating Iran. And bear in mind that it doesn't take much for a U.S. president who thinks this way against Iran to send warships to the Persian Gulf to show a mark of strength. It raises a number of questions though over how he will handle the war in Syria (as Iran and Hezbollah are fighting Daesh, along with Russia air support) and Turkey appears to be in an increasingly isolated positon the more the Assad regime advances, with the Kurds anxious to carve out a new state in the entire region, straddling Syria, Iraq, Iran and Turkey of course.

And these hawks who want to demonize Iran and make Saudi Arabia stronger again are not alone. In Washington, a new CIA director. Mike Pompeo, who Trump has appointed wants to "unravel" the Iran deal, as one commentator put it recently, as does Trump's new national security advisor retired army General Michael Flynn who doesn't appear at first glance to be a man wildly overburdened with intellect.

Yet what will a new Middle East look like after January the 20th when Trump takes office? Trump has already got himself into a venal tangle of conflicting relationships and contradictory policy statements that even the smartest commentators are baffled. Iran now not going ahead with its nuclear program and the Saudis more or less content with their lot, should prove to be hard for Mattis and others to create their Cheney moment. The Middle East is a whole lot more complicated now than it was in the 1980s when it wasn't hard for U.S. experts to determine that Iran was the enemy, after two bombings in Beirut which killed hundreds of American marines and U.S. hostages like Terry Anderson being held by Hezbollah for seven years. Iran is evolving slowly into a modern state and just the mere fact that its own politics are polarized should tell even the most ardent foe of the regime that the world have changed.

But for some, clinging onto the past is much more convenient for their own purposes and the narrative which has made them what they are today. I don't imagine Matttis or Pompeo wanting to sit behind desks and read reports all day long in their moments of glory. If they would even bother to read articles from leading secular journalists, they would understand that the last thing Iran wants is Daesh undermining its control in Iraq and Syria and drawing valuable resources away from its own state coffers. To suggest that Tehran finds Daesh "convenient" for its own mischief is a deeply worrying, erroneous and absurdly misinformed analysis which should keep U.S. all awake at night. The Neo Cons are back and they are burning the history books, tearing up agreements and handing out both the black and white cowboy hats in the Middle East. In fact, everything is going back to being black and white once again as shades of grey was just too hot to handle by the ultra conservatives in DC, Jerusalem and Riyadh.

* The Middle East correspondent for Deutsche Welle TV who often reports for the British weekly The Mail on Sunday, lives in Beirut @MartinRJay
Last Update: Dec 19, 2016 2:24 am
RELATED TOPICS