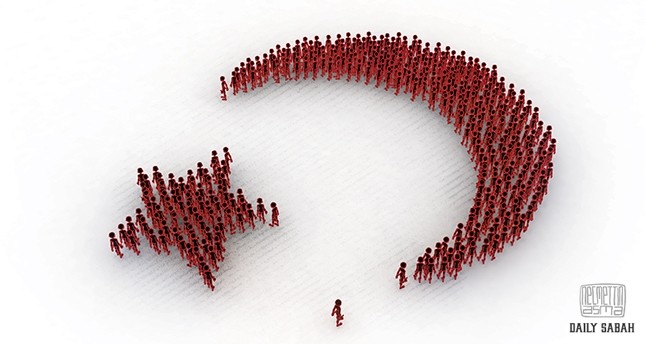 The deadly night of July 15 and the sacrifices made by the Turkish people, particularly young people and women, for the future of Turkey against the pustchists has been marked as an unprecented moment in the history of the fight for democracy

Over the last three-to-five years, Turkey has faced a number of attempts by the now fully exposed Gülenist Terror Group (FETÖ) to overthrow the democratically elected government. The failed July 15 military coup was the latest of such attempts by the shady terror group and was foiled thanks to the sacrifices of Turkish society, dominated by young people and women who took to the streets after a call by President Recep Tayyip Erdoğan to save democracy and the future of the nation. Placing their bodies in the way of tanks, they thwarted this heinous coup attempt with their bare hands.

Treacherous putschists opened fire on civilians; tanks crushed citizens to death and ran over cars in the middle of streets with people still inside; Gülenist officers tried to capture or assassinate the president and his family; F16s were used to bomb Parliament as well as the Presidential Palace, police and national intelligence headquarters; the chief of staff and military commanders were taken hostage; key command posts, democratic TV stations and media outlets were raided; low-flying fighter jets triggered sonic booms over major cities to terrify civilians.

These atrocious acts were aimed at spreading fear throughout society in general. However, brave individuals from all walks of life and political views stood up against the putschists, risking their lives in the failed coup attempt which left more than 240 martyrs dead and thousands of others wounded, including men, women and children of all ages, civilians, police officers, military personnel and civil servants who showed their loyalty to democracy and fought against the putschists. Collectively, their sacrifices will never be forgotten.

Following the coup attempt, President Erdoğan called on the masses to attend democracy watches and civilians stayed out in the streets, town squares and in front of military barracks for an entire month across the country. The Presidential Palace, Parliament, the Prime Ministry and other key institutions were among the stations of these watches with tens of thousands of people on alert to fight off any possible new attempts by the putschists.

Since the early hours of the coup attempt, Western governments and the media failed to react properly to the developments in Turkey. They either remained silent or made ambiguous and belated official statements with media coverage focusing on why the attempt had proved unsuccessful. Considering all this, one cannot help but think that both the U.S and European countries must have prepared themselves for the success of the coup attempt and were puzzled by its outcome. Western governments seemed as if they were ready to repeat their course of action during the military coup in Egypt in 2013. They were even unable to call the military coup in Egypt a coup back then and quickly embraced Abdul Fattah el-Sissi who ousted the country's first democratically elected president. Even the U.S. Secretary of State John Kerry said at the time that the Egyptian military was not staging a coup but "restoring democracy." It was not surprising to see Kerry inviting both sides to calm down during the coup attempt in Turkey.

Despite Turkey's critical position within NATO, it was not the leaders of Western allies but rather Russian President Vladimir Putin who immediately called President Erdoğan to express solidarity against the coup. There were neither any high level visits, calls or statements from the U.S. and the EU supportive of Turkish democracy in the aftermath of the coup; on the contrary, there was highly biased media coverage and official statements criticizing Turkey for the measures taken to defuse the bloody coup attempt, claiming that the security operations against the putschist Gülenists meant an authoritarian turn for the country.

A democratically elected government has the right to take every measure within the law to subdue an attempted coup even if it requires widespread detentions, arrests and purge of putschists from the military and other state institutions. In Turkey's case, this is even more important because the coup was orchestrated by a cult, disguised in the form of so-called moderate Islam that infiltrated key parts of state apparatus, particularly the military, police and judiciary for more than 40 years in a highly systematic and secretive manner. FETÖ has engaged in all kinds of criminal activity during this period from illegal wiretapping, money laundering, and blackmailing to stealing exam questions, violating private life through hidden camera records and breaking rules on the protection of personal data. In light of the unfolding information following the failed coup, it is no remote possibility that the Gülenist cult has also engaged in unsolved murders. This terrorist group also attempted to assassinate President Erdoğan in 2012 as confessed by some of its high level members currently under arrest.

Unfortunately, just like their failure in supporting Turkish democracy against the coup, Western allies also fell short of admitting the fact that the coup attempt was planned and put into implementation by the Gülenist terror group whose leader is based in the U.S. Pretending to be a "moderate movement" with references to Islam, it is in fact an illegal, clandestine, complex and evil network of crime that uses civil society and education activities as a means to cover up its activities. Turkish authorities officially submitted all the concrete evidence on the direct involvement of Fetullah Gülen, the head of FETÖ, in the coup attempt to their U.S. counterparts.

More than one month after the coup attempt, U.S. Vice President Joe Biden paid a belated official visit to Turkey and expressed his regret for not coming earlier, adding to the disillusionment of Ankara with the outgoing Obama administration. Following the presidential elections in November that ended up with the victory of Donald Trump, the U.S. must stand by its long-time ally Turkey and the incoming authorities in Washington should not be late in handing over Gülen to Turkey. What Turkey expects from the Western allies is honest and unwavering support to Turkish democracy and its fight against all terrorist groups.

FETÖ has many faces and has been highly competent in hiding its real face under the guise of a widespread school and charity network. Focusing all its energy on influencing intelligent youth from early ages, it has raised thousands of "remote controlled" militants or operatives ready to do whatever the head of the terrorist cult orders without any questioning. This explains how the cult's infiltrators in the Turkish army were able to bomb their own country, killing hundreds of innocent citizens during the coup attempt. However, despite the FETÖ's decades of undercover and misleading efforts targeting them, the Turkish youth in large parts demonstrated an unprecedented bravery on the night of July 15. The youth came up against the Gülenist traitors, defying fighter jets, tanks and helicopters hijacked by the putschists. Some of the youngsters martyred by the putschists were in their early fifteens, including fifteen-years-old Halil İbrahim Yıldırım, the youngest martyr. He was the son of a family with four other children and had to drop out of secondary school to support his father in making their living. Among the other youngest martyrs are Mahir Albayrak, Engin Tilbeç and Abdullah Tayyip Olçok who were brutally killed by the Gülenist terrorist in the early years of their lives.

Likewise, Turkish women from all ages displayed great bravery in standing up against the coup attempt, some of them daring to confront putschist tanks alone. Defying the guns directly pointed at them, they continued to march towards the coup-plotters, didn't bow down and take any step back until being martyred. One of these brave women was Türkan Türkmen Tekin who took to the street after learning that Istanbul's Atatürk airport was occupied by the putschists. On her way to the airport together with her family and thousands of other fellow citizens, she was crushed to death by a putschist tank that rolled over people. This 52-year-old valiant woman left behind her husband and three children aged between 11 and 20. Another woman martyr was 44-year-old Ayşe Aykaç who went to the Bosporus Bridge blocked by the putschists after hearing President Erdogan's call for the nation to go out to the streets to ward off the coup attempt. She was martyred by the putschist soldiers who opened targeted fire on people seeking to break their blocking on the bridge. Those left behind were her husband and four children.

The July 15 failed coup attempt and the towering sacrifice made by dignified Turkish people, particularly the youth and women, to prevent derailment of democracy will never be forgotten, and will have an indelible mark on our future as a nation. It is also important to keep the spirit of 15 July alive through academic, artistic and various works. Especially universities, non-governmental organizations, think tanks, media outlets, magazines, movie makers and literary and arts circles shall assume responsibility to keep the spirit alive.

As a nation, the Turkish society kept its democratic vigilance and stood firm behind the democratically-elected President and government because what was at stake was the future well-being of its children. A democratic, prosperous and powerful new Turkey will rise mainly on the shoulders of the dynamic youth and brave women.