Rapproachment and partnership will be Karlov's legacy 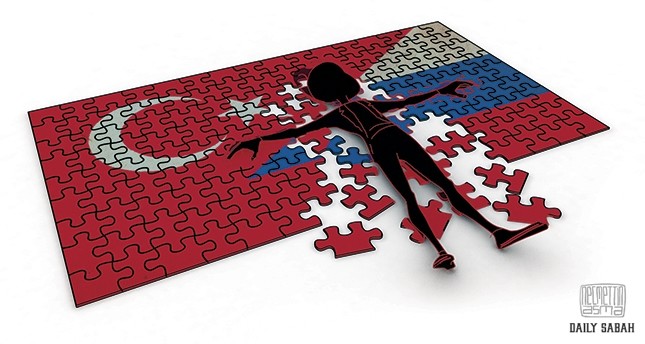 The Russian Foreign Ministry has classified the killing of its ambassador as an act of terror. Russia's political establishment is tough and determined about punishing the terrorists behind the death of Andrei Karlov

The recent developments in our world are very upsetting. While the bloodshed in Syria and Iraq continues to be the focus of international attention, having become a sad, but somewhat routine topic of international news, the assassination of Andrei Karlov, the Russian Ambassador to Turkey, came as a real shock to the world. The Russian envoy was gunned down by a FETÖ (Gülenist Terror Group) member with police identification, while attending an opening for a photo exposition, symbolically titled "Russia Through the Eyes of a Turk," in Ankara.

It's clear that late-Ambassador Karlov felt safe and comfortable living in Turkey, believed in the friendship of Turks and Russians, full-heartedly contributing to the bettering of relations between Turkey and Russia. His tenure coincided with difficult times in the Turkey-Russia relations that follower the jet crisis in November 2015, and it was his particular effort that contributed to these relations coming back to normalcy and increasingly gaining momentum.

Ambassador Karlov was appointed to Turkey in 2013, making a dramatic turn in his diplomatic career. A graduate of the Moscow University for International Relations (MGIMO) with proficiency in Korean, Karlov served in different positions at the Russian Embassy in Pyongyang for nearly 15 years, finally receiving the highest diplomatic rank, Ambassador Plenipotentiary. His years there coincided with the revival of Russia's cultural and religious values that motivated intelligent and thinking Russians to rediscover their historic identity. To contribute to the demanding processes of the 2000s, Ambassador Karlov initiated the construction in Pyongyang of an Orthodox church of Holy Trinity, sanctified by the Moscow Patriarchate. Later, his wife and he held their wedding there.

Today, at the moment of his tragic death, both subordinates and superiors recall Andrei Karlov as a decent and down-to-earth intelligent person and a good professional and a wise diplomat. Upon hearing about Ambassador Karlov's untimely demise, President Putin, who had known him personally, referred to Karlov as "A brilliant diplomat," while adding after a pause, "And a very kind person."

Turkey and Russia take the assassination of Ambassador Karlov personally and close-to-heart, considering it a shared tragedy and a common grief.

The countries are natural partners due to their geostrategic location, with relations that date back more than 500 years, starting from the end of the 15th century. Through the years, the country's relations experienced their ups and downs, ranging from war and enmity to close friendship and mutual respect, passing through the Cold War years and the dramatic times of the recent jet crisis.

Currently Turkey-Russia relations are on the rise. They have a sufficient pillar of stability built by a sound co-operation in the field of energy, launched in the end of the 1970s, through the years creating a powerful driver of the Turkey-Russia rapprochement. Today the countries have what they have never had before: a shared responsibility over the fate of the people caught in the bloodshed of war in the Middle East.

The year 2016 has increasingly revealed the absolute futility of the U.S.-led coalition efforts to resolve the Syrian crisis both in the battle field and at the negotiating table. It has been proven that there is an urgent need for Turkey and Russia to join forces in the fight against terror for the benefit of gaining a lasting peace. It is a demanding task to accomplish, requiring political wisdom from the leaders of Turkey and Russia. They have proven this wisdom through reconciliation last June and moving beyond the harsh rhetoric and enmity of the past six months. The tragic death of the Russian Ambassador to Turkey

by the hand of a Turkish assassin has presented yet another test of Turkey-Russia relations. Let us hope that they pass it with honors.

The assassination was poorly timed, either by a tragic coincidence or someone's ill will. Ambassador Karlov was killed the day before a tripartite for Turkey-Russia-Iran negotiations on Syria was scheduled to start in Moscow. The very fact that these countries were coming together to discuss the situation in Syria is a major achievement. It underlines the growing strength in the links between Ankara, Moscow and Tehran being brought to the negotiating table showing leverage and the capacity to stop the bloodshed in the Middle East. The awaited meeting went ahead despite concerns about its potential derailment in light of the Russian envoy's assassination in Ankara. On Dec. 21, it adopted a declaration setting out the principles designed to broker peace in Syria and prioritizing the fight against terrorism, rather than removing the Syrian regime led by Bashar Assad. It is said, among other things, that "Iran, Russia and Turkey are ready to facilitate the drafting of an agreement, which is already being negotiated, between the Syrian government and the opposition, and will become its guarantors." Let us hope that the tragic death of the Russian Ambassador won't become a destabilizing factor in the start of rapprochement.

The war on terror

Russia considers the assassination of its ambassador a national tragedy. In Russian history, Andrei Karlov became the fourth ambassador to lose his life while in diplomatic service. The first was Ambassador Griboedov, a renowned Russian composer and poet, murdered by an angry mob during an armed mutiny in Tehran in the 19th century. Two other ambassadors were killed in the 1920s and 1930s, respectively, by opponents of the Bolshevik regime. The tragic incidents resulted in the deterioration of Russia's relations with the respective countries, which brings us to the core of the issue: What reaction can we expect from Russia now?

The Russian Foreign Ministry has classified the killing of its ambassador as an act of terror. Russia's political establishment is tough and determined about punishing the terrorists behind the death of Andrei Karlov, immediately and without mercy. It voices clear and loud support for broad-scope operations for eradicating the terrorists behind the ambassador's assassination.

President Putin has apparently taken the tragic event close to heart. He postponed his annual end-of-year press conference in order to attend the funeral of the assassinated Russian Ambassador in Turkey.

Andrei Karlov was buried in Moscow on Dec. 22. Two days prior to the burial, a special board brought from Ankara to Moscow the body of Ambassador Karlov. Overwhelmed with grief and emotion, his family met the coffin at the airfield, accompanied by the Russian Minister of Foreign Affairs Sergey Lavrov and the Turkish Minister of Foreign Affairs Mevlut Çavuşoğlu. As a last tribute to the assassinated Russian Ambassador, Cavusoglu held the hand of Andrei Karlov's mother, a deeply humane gesture.
Last Update: Dec 24, 2016 12:33 pm
RELATED TOPICS