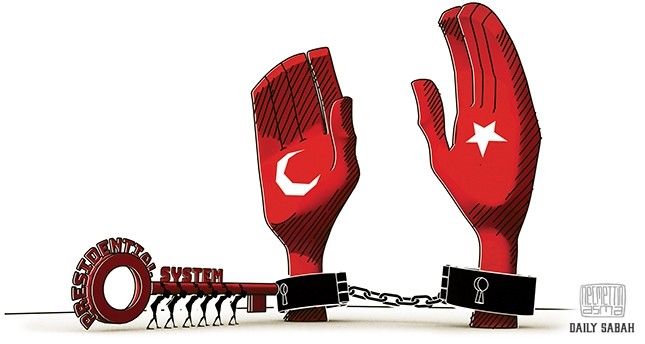 The proposed constitutional amendment, which has been occupying the political agenda for a long time, has been presented to Turkish Parliament in cooperation with the Justice and Development Party (AK Party) and the Nationalist Movement Party (MHP). This change is mainly centered on the president and with the aim of eliminating the plight of the current order and to stabilize politics.

The constitutional amendment and procedure

Although the constitutional amendment proposal was submitted to Turkish Parliament and to the public, it failed to create enough discussion on platforms around the country. One cause of this problem is the two recent painful terrorist attacks that hit the country in the pastfew weeks. Also, another reason, unfortunately, stems from basic problems in the political culture.

The meaning of constitutional amendment

The current political system was created as a parliamentary regime with the president at the center after the military coup of Sept. 12, 1980. In this system, the president, who must be above politics and symbolic, is given extraordinary powers as a result of the militaristic view of politics. The present structure has seen an important axis shift as a result of the "367 crisis," in the 2007 referendum when it was decided that the president would be elected by the public rather than Parliament. The fact that the presidency, which is far from being symbolic, also has legitimacy with the public as the system shifted from a parliamentary regime to a semi-presidential regime. The existence of a strong-on-paper and elected president, had significant risks in terms of political stability. However, President Recep Tayyip Erdoğan's charismatic personality and the importance of state regulation resulting from the coup attempt on July 15 encouraged the MHP to support the AK Party changes.

A system name is not explicitly spelled out as it is in the current constitution, when the function of executive authority is examined, but it tries to establish a presidential system in which the president is located at the center.

First, the distribution of executive power in the presidency, prime ministry and ministerial council in the existing system will be terminated. The Prime Ministry and the Council of Ministers will be abolished. Executive authority will be given to the president. Although ministries remain the same, the expression "secretary" in the presidential system is not used. These structures are bound to the president who is the sole owner of the executive. It states that appointments for public administration will be made by the president.

It was proposed that a vice-president would serve as a bridge between the president and ministries.

The election of the president is naturally directly owned by the people. The presidency lasts for five years, and elections can be held twice. An important innovation is that hundreds of voters can nominate a president as well as political parties. In accordance with the presidency's rule, the president, the vice president or any minister may not serve in Parliament. If any deputy is in charge of the executive, his/her legislative membership will cease. The president will not be able to publish delegated legislation but will preside over the presidential decree that provides bureaucratic functioning. In addition, Turkish Parliament can open the way to the Supreme Court to the president on charges of duty crime with the support of two-thirds of the members. Naturally, in the proposal, executive authority is given to the president and a model in which the relations between the legislature and the executive are hardened is envisaged.

When Turkish Parliament makes a decision by a three-fifths majority vote, the presidential elections will be renewed with parliamentary elections. The most important feature of the constitutional amendment is that the presidential election and parliamentary elections will be held at the same time. Making these elections at different times is important in terms of the autonomy of executive and legislative relations and ensuring political stability.

When viewed from the legislative perspective, to strengthen representation, the number of deputies will be increased from 550 to 600. The age for selection will be reduced from 25 to 18. To avoid the problem of representation due to the death of a deputy, the application of substitute deputies has been started. The four-year legislative period will be increased to five years to strengthen representation mechanisms and to ensure stability by running ahead of the coalition. The issue that matters at this point is the change to be made to the election law. There is no systematic expression in the present constitution except for election-related judicial review, justice in representation and statements of stability in administration. For the good functioning of representation mechanisms, it is necessary to switch to the narrow zone system. This is important to the amendment of the law.

As to the judiciary, half of the Supreme Council of Judges and Prosecutors (HSYK) will be appointed by the president, while the other half will be elected by the legislature. This will diversify the composition of the judiciary. It is also important that the Military Court of Cassation and the Supreme Military Administrative Court be abolished and civilian tribunals recruited and their neutrality and independence ensured. In the proposed constitutional amendment, the General Command of the Gendarmerie from the National Security Council was removed and the Martial Law regime will be abolished.

The operation of democratic experiences

Turkey is about to move to a Turkish-style presidential system that has been talked about for quite a long time. Turkish politics' parliamentary past is experiencing a significant breaking point. The change in the name of political stability has been clearly harassed by non-democratic forces since the first day it was proposed. Those who advocate that Turkey will not be able to make any changes are carrying out policies to make sure this change is postponed. In our view, it is necessary to talk about the constitutional proposal in more detail by opening negotiating channels. The Turkish people have the gentleness, self-assurance and faithfulness to oppose military coups with their democratic gains. The important thing is to operate these gains.