Turkey: Defending democracy in the age of democratic dilapidation 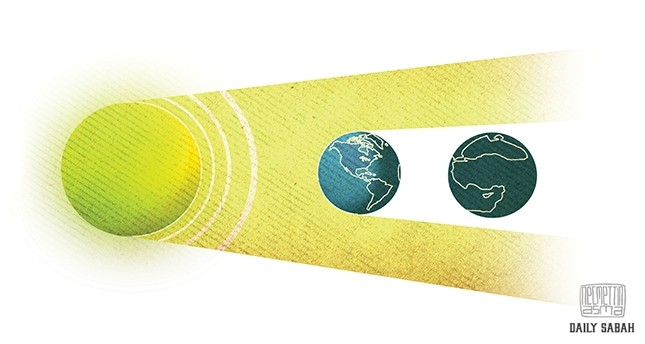 Turkey is struggling with various problems within its borders as the world marches toward a more ambiguous future with every passing day thanks to economic crises, a lack of dialogue and the disappearance of humanity

In the global age that we are living in, everything tends to be globalized; namely, international trade and business. Yet, this increasing volume of trade does not come without any problems or risks - not only for the societies whose resources have been exploited but also for the societies that are benefitting as well. The antagonism or "agonism" between the exploiter and the exploited will eventually come to the surface and cause trepidation in the West and in the global north, which is probably why the "children of the Maghreb" have, from time to time, burned Paris. It seems that in recent decades, political discontent and disaffection have become increasingly evident in both developed and developing countries due to the weakness in economic recovery and the head-spinning speed of technological inventions. As modern society has become a truly consumer society, it is now almost impossible to satisfy people.

Economic weakness and political disruption are major risks that have been affecting societies all over the world. These and similar other global risks like the vote by the U.K. to leave the EU and the election victory of Donald Trump in the U.S. have left the international community downtrodden. Political uncertainty and increasing income and wealth disparity and most importantly, lack of belief in an imminent economic growth are the main reasons why more and more people are losing faith in a prosperous future. The ongoing crises in the world and the Middle East in particular have made people increasingly worried about their own lives; for example, the wave of migrants fleeing the Syrian crisis for Europe and the U.S. and Canada causes job insecurity for the citizens of these countries. So, people are becoming more and more convinced that security – both in physical and economic terms - is becoming more important than freedoms; the age-old dilemma. This feeling of insecurity has resulted in a decline in the hope that democracy provides. In other words, economic crises and feelings of insecurity have brought about a deeper crisis in democracy. Western societies are running into a deepening social and cultural polarization through extreme right wing policies that are against "everything foreign." Politicians and the media are increasingly using "post-truth debates" to mold public opinion but even these political maneuvers and tactics are no longer useful for convincing people of the merits of democracy.

In such a world exhausted by democracy, a country called Turkey has been trying to defend its democratic accumulations against all sorts of attacks that are being posed under the guise of terrorist organizations. Turkey would not be counted among the countries with the healthiest democratic systems and traditions in the world; yet, it has long attempted to enhance its democracy inch by inch in various aspects of economic, social, and cultural life. Since its inception, it has chosen the European economic, legal, political, and cultural lifestyle as its model. It was, and has been, a difficult task to copy and imitate these Western models for various factors like being an eastern society with a different religion and traditions. Despite the fact that Turkey has acquired a kind of immunity against "normal" military coups in the last six decades, the most recent one having occurred on July 15 last year, was something different as it was perceived by the Turkish public. It was a direct type of assault on Turkish democracy and, even for many Turkish citizens, an attempt by a group of terrorists in military uniforms to occupy the country. The Turkish nation is a kind of society that has been very keen on its independence historically and refuses to live under oppression.

However, Turks feel that their bravery against arms and military tanks on the night of that heinous coup attempt has not been adequately appreciated by the international community. In terms of its abstract concept and in practice, democracy has been suffering all kinds of discrepancies all over the world but a country has emerged to defend its democracy despite casualties. The Turkish people have difficulty in understanding the attitude of the international community; namely, their lack of praise for defending democratic values, in providing relief for refugees from Iraq and Syria, and in foreign aid for the impoverished regions of the world. The world remembers the image of a Slovak citizen who stood in front of a Soviet tank to protest the invasion of Czechoslovakia in 1968. On the other hand, it is said that the picture of the so-called "tank man," a Chinese student who protested tanks in Beijing's Tiananmen Square in 1989, was one of the most iconic images of the 20th century. There were hundreds of unarmed people who stood in front of tanks on the night of the coup attempt in Turkey, yet even their names are unknown. Against such heroic actions by its citizens, Turkey has only received criticism over the purges of coup attempters, downgrading its credit rating, and degrading its place in various scales like democracy and freedoms index or reports of freedom house, journalists, nation brands, etc. The Turkish public believes that the coup plotters are being praised more than the ordinary citizens who did not allow a military dictatorship to replace its hard-won democracy.

Perhaps, Turkey should not expect any assistance and support in its arduous journey of achieving a healthy democracy with the assistance of those states that consider themselves to be the cradle of democracy. Such states might keep the minds of their citizens brainwashed by flawed arguments of post-truth political debates lest their comfort zones be disrupted by the groups that they perceive as harmful. They should be warned that storm clouds are gathering and the world they have created will not endure these fallacies and inequalities for very long.

* Professor of anthropology in the Department of Radio, Television and Cinema at Marmara University
Last Update: Mar 13, 2017 6:10 pm
RELATED TOPICS