How the Independent became a well of fake news on Turkey 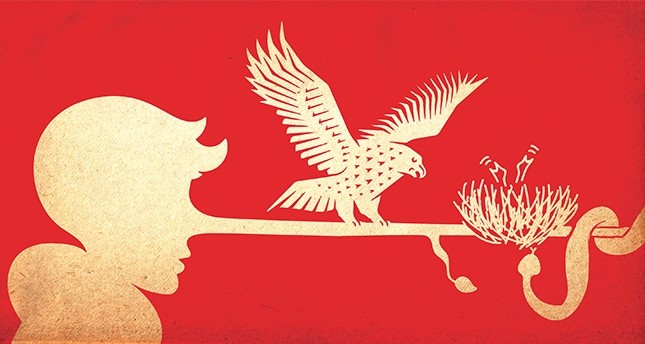 The Independent is shamelessly making false news, black propaganda and publishing insulting articles against the Turkish nation and state to increase the number of its currently declining online readership

Some things just don't get any more bearable with time, such as watching the systematic defamation of Turkey in the British media that has been incessant for the last four-five years, which is still as infuriating as ever. The exuberance of bias and twisted reporting on events in Turkey knows no boundaries. Leading British news organizations that once had respectable reputations in journalism are now reporting fake news about Turkey on an industrial scale. They have abandoned their journalistic ethics to be perfectly consistent with an anti-Turkey agenda that serves God knows what.

The examples are endless. However, a recent effort in the Independent newspaper has been particularly notable. In the past few months, the Independent managed to come up with the most obscure stories to date about Turkey. The inexplicable effort they went into handpicking some inconsequential local news and going out of their way to rewrite it is astounding. One can understand or get used to the idea that a newspaper with a certain political view will interpret world news in a certain way. But we're not talking about different views; we're talking about blatant fake news.

Last week The Independent published a story about Turkey with the headline "Turkey says it can now fire police officers and coastguards who marry adulterers." The headline in its entirety is a misrepresentation of facts. First, the "can now" refers to a 34-year-old decree. It's not about police officers; it's about the gendarmerie and has nothing to do with "adultery."

Let me explain step by step. First, the legislation about the dismissal of police officers and coastguard members dates back to 1983. So the decree, which says, "To intentionally marry a person who is known or understood to be impure, or to maintain marriage, or to keep such a person with him or to live in a continuous manner" was issued 34 years ago when Erdoğan wasn't anywhere near the government, and there was no ruling Justice and Development Party (AK Party). However, the Independent chose to manipulate the story by deliberately ignoring the date of the decree and representing it as though the AK Party brought in a new law that makes "adultery" a sackable offence for police officers.

Second, the choice of word for the offence is totally misleading. Despite the Independent's headline, there is no mention of the word "adultery" in the original decree. The word used in the decree is "impurity" and that is about prostitution. Let me add that soliciting a prostitute is a sackable offence for a police officer according to UK laws too. And finally, this is all about the gendarmerie and the coastguard having the same rules of conduct as police officers. This is because the gendarmerie and the coastguard are now run by the Ministry of State since the coup attempt last year. Previously, the gendarmerie was run by the Turkish Armed Forces (TSK). Were they free to marry or live with sex workers before? Of course not. For the gendarmerie under the TSK's rules of conduct, this was already a sackable offence. So in terms of the reasons to be sacked, for a gendarme, a police officer or a member of the coast guard, absolutely nothing changed with this new administrative decree that simply swaps public officers from one set of disciplinary rules of conduct to another.

There is something much more important about the Turkish disciplinary rules of conduct for public security officers, which the Independent preferred not to mention. Of the article in question that lists the acts requiring punishment for dismissal, the first item states: "to discriminate in language, race, gender, political thought, philosophical belief, religion and sect." The disciplinary article prioritizes the offence of discrimination on grounds of the above and states that it requires dismissal. But that's not worth mentioning for the "editors" of the Independent newspaper.

Ethics is just a principle of ancient Greek philosophy

There are other occasions where the Independent makes a bid to create a false image of Turkey to influence its readers who do not have time to double check and triple check everything they read on the newspaper's website. In January the Independent published a story with a headline stating, "Turkish marriage guide advises wives to wear sexy outfits after being beaten to 'please' their husbands."

The headline "Turkish Marriage Guide" was typically misleading, making sure that it sounds like it's an official marriage guide by the government. But of course it wasn't. The ridiculous manual was written by an ex-religious affairs employee and published by a small religious publication house. The members of a local council in the western city of Kütahya decided that it's a good idea to hand it out to a few newly married couples. This is such an insignificant local news story that it is hard to understand how it made it to the Independent. The reason is certainly not in the interest of the Independent's readers, it's the Independent's anti-Turkey agenda, which is to present the current Turkish government as Islamist and give it some of that good old bad press. For this, the Independent reaches the depths of Anatolia, carefully selects a story, vamps it up with a misleading headline and makes it into material for the paper's ongoing anti-AK Party campaign. And it works. People who don't know much about Turkey read the story and don't question it because "it's in the papers."

The grossly abused labeling "Islamist" for the Turkish government and President Recep Tayyip Erdoğan is another part of the smear campaign by the Independent. Only a few days ago in an article about Turkish football star Arda Turan's support for the AK Party government, the newspaper described Turan as a "vocal supporter of Erdoğan's Islamist government." As the Council on American-Islamic Relations put so well, "The term 'Islamist' has become shorthand for 'Muslims we don't like'." That's precisely what the Independent is doing. There are various definitions for the world "Islamist," and all include militarism, radicalism, extremism or application of sharia law. The Associated Press style guide defines the word "Islamist" as: "An advocate or supporter of a political movement that favors reordering government and society in accordance with laws prescribed by Islam." The AK Party has been in power for 15 years and won eight elections (including two referendums) with landslide results; however, there isn't even one article of legislation that they have passed based on sharia law or any specifically Islamic teaching, nor are they extremists or militants. The AK Party government is not an Islamist government according to any definition of the word; on the contrary, they are and have been secular all along.The Independent's editors and journalists, who have evidently abandoned any journalistic integrity, are laboriously making up sensationalist, clickbait stories based on virtually no facts and publishing them for its ever declining number of online readers. Fake news is a pandemic rotting the world media from within. Once an Internet phenomenon via crazy viral stories, publishing fake news for the purpose of manipulation or just for clickbait is now bad medicine that doesn't fix but slowly kills any publication that is already on its way out.

* A freelance journalist and reporter based in London

A freelance journalist and reporter based in London
Last Update: Mar 21, 2017 10:22 am
RELATED TOPICS