Praising PKK for 'gender equality' an insult against Turkish women

by Kadem, Women and Democracy Association 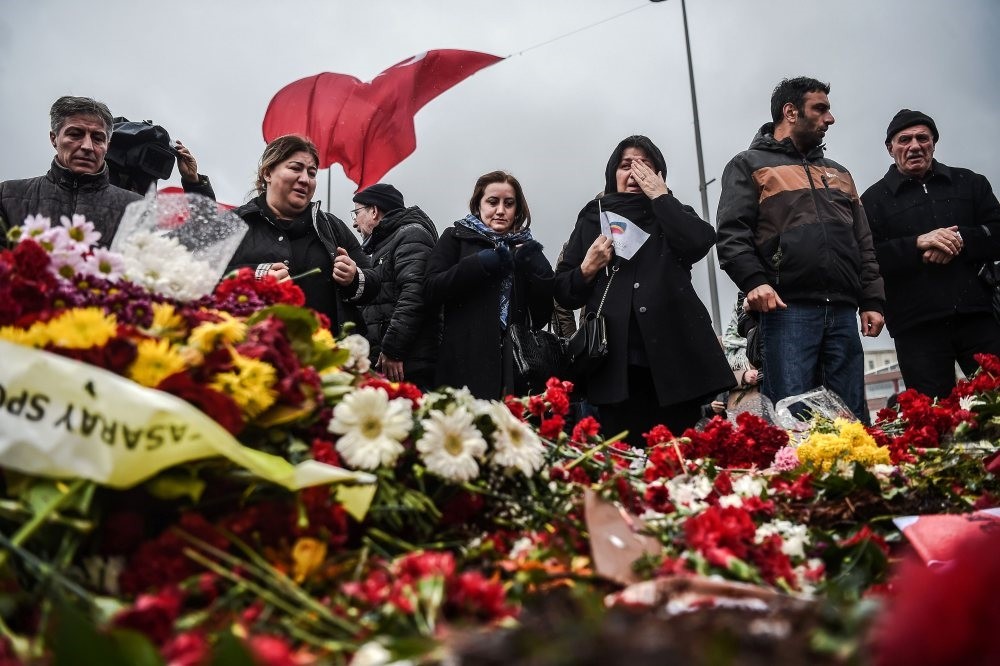 One of the two suicide bombers who committed the attacks on Dec. 13 in Istanbul last year that killed 44 people was a woman, one of the many who have been indoctrinated by the PKK, which the New York Times praises for its gender equality.
by Kadem, Women and Democracy Association Feb 09, 2017 12:00 am

The New York Times article on the outlawed PKK's role on 'gender equality' is simply an example of its manipulations against Turkey and a huge insult to not only Turkish women, but all the world's conscientious public

An article published in The New York Times on Dec. 6 last year penned by Rod Norland, "Crackdown in Turkey Threatens a Haven of Gender Equality," was clearly designed to legitimize the PKK, which is recognized as a terrorist group by the U.S. and the EU, and abused the term "gender equality" by using blatantly false information. We, as KADEM (Women and Democracy Association), vehemently reject assertions made in the article and in response sent an article a month ago condemning its publication. We explained how the PKK pulled women into a vicious cycle of cruelty, exploiting them as tools to propagate violence. The New York Times, which has neither published our response nor contacted KADEM in any way to explain why, prefers to ignore our just criticisms of their biased article. Unfortunately, the New York Times continues to be a willing instrument doing the bidding of terrorist propagators, accommodating any person or group that openly commits terrorism against Turkey. Naivety fails to explain how such a media group can blindly accept being a middleman for terrorists, while disregarding voices of reason. By ignoring KADEM's response, the New York Times ignored the voice of Turkish women for democracy. Below is the KADEM article sent to the New York Times:

Rod Norland's Dec. 6, 2016, article in The New York Times, "Crackdown in Turkey Threatens a Haven of Gender Equality Built by Kurds," is clearly intended to legitimize the PKK terrorist organization by abusing the issue of gender equality.

The article displays a frightening point of view, not only for Turkey, but the whole world, by indirectly legitimizing the PKK, which the EU, NATO and the U.S. have all designated a terrorist organization. The PKK emerged as the armed wing of the Kurdish separatist movement in Turkey and has organized violent attacks and suicide bombings since the 1980s, killing more than 6,700 civilians and wounding more than 14,200. Furthermore, despite Turkey's efforts for reconciliation, the PKK broke the ceasefire established in 2013 by killing two police officers in their home in 2015.

With this article in The New York Times, the Western media has produced a false image of female PKK fighters, tying together women's struggle for freedom and equality and their militarization in a terrorist organization. The PKK's radicalization of women with the incitement of violence should not be interpreted as emancipation.

The article associates women's strength with being armed and claims to support gender equality by somehow narrating stories of female terrorists who are unacceptably praised as being better snipers. Yet, contrary to the article, the PKK has not decreased violence against women and has instead pulled them into a vicious cycle of violence, socially justifying it through the women themselves. The PKK uses violence as a message of empowerment, and in doing so it becomes a just cause in the organization's eyes.

The portrayal of women in the PKK by the most powerful media organization in the United States, the so-called cradle of human rights, as freedom fighters is unacceptable and hypocritical since these women have aimed their weapons at innocent people and murdered thousands in suicide bombings.

There is not a single mention of the most terrible encounter of men's hegemony and sexual abuse in the organization in Norland's article. This negligence reveals the article's unsavory intention.

Kurdish girls are taken hostage, made hostile to their families and society and are militarized with psychological and ideological oppression. They are forced to live with a cold, numb identity that glorifies destruction and fighting.

The article emphasizes that the Peoples' Democratic Party (HDP), the political extension of the PKK, has a high number of female representatives at elected levels, but it does not mention that the HDP's female representatives are not very powerful at the grassroots level. This high number is in fact the product of an ideological, imperious and patronizing viewpoint with an artificial sense of equality rather than a demand from the grassroots of the party. The claim in the article that Kurdish politics is inclusive of women based on the number of female representatives is inaccurate, as this inclusiveness in the HDP is limited to certain women. The HDP built its structure on ethnic politics, and women belonging to different ethnic groups have little room to maneuver in the party due to its strict focus on Kurdish ethnicity. Furthermore, the article presents the HDP as an egalitarian political movement but ignores that the Kurdish political movement developed by exploiting women without any substantial concern for women's needs. This self-interested attitude toward women is an instrumentalization of women and gender for political gain.

It cannot be argued, however, that an article examining the active participation of Turkish women in politics reflects the facts without mentioning the active participation of conservative women in politics throughout the last two decades. The empowerment of conservative women in the political sphere had started with the Welfare Party (RP) and continued with the Justice and Development Party (AK Party), resulting in the enlistment of these women on the front rows of Parliament and deputy nominations, allowing women to become real representatives in political life. Any analysis of women's participation in politics in Turkey without discussing the huge grassroots social mobility of pious women lacks information and is far from comprehensive.

The legitimization of a terrorist organization by creating false images of women in this article is a great disrespect to the innocent people and their families who have been victims of PKK terrorism.

We condemn The New York Times, which has entrusted the future of gender equality to a terrorist organization and terrorists, and we invite the paper of record to apologize not only to Turkey and its women, but also to the world's conscientious public.
Last Update: Feb 09, 2017 11:16 am
RELATED TOPICS