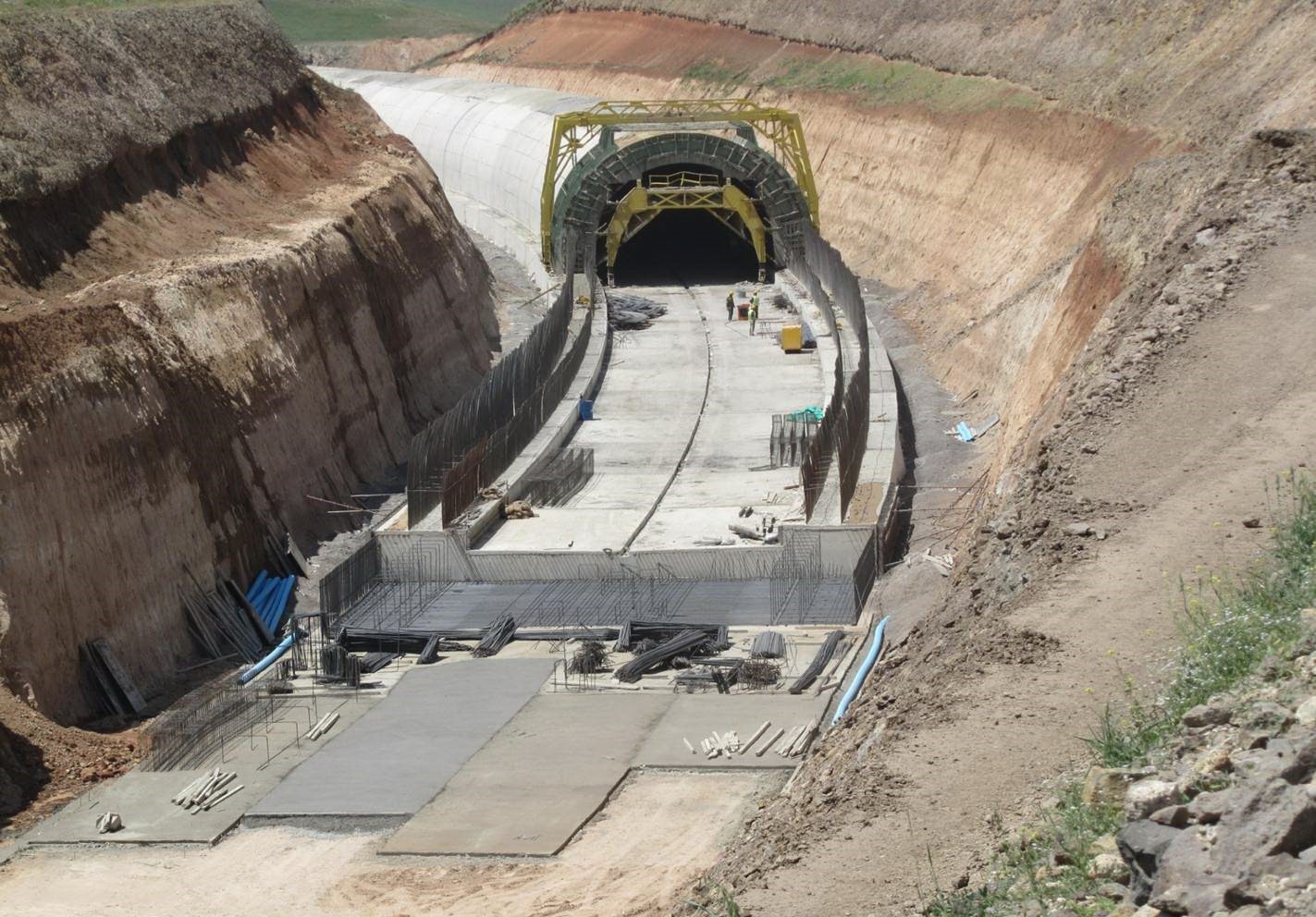 The construction site of the Baku-Tbilisi-Kars railway, is one of the most important projects in the Eurasia region to increase the regional activity
by Özge Nur Öğütcü Feb 20, 2017 12:00 am

The Baku-Tbilisi-Kars railway project is not only a Eurasia-centered development, but it is also a ray of hope for increasing regional and global economic cooperation and bilateral relations

The gravity of the world's economic growth and production is shifting from West to East. Regional powers and outside actors, such as the United States, the European Union, Japan, Russia and others, have developed many projects to engage with countries in Eurasia in a framework to strengthen regional cooperation. Having direct connections with Iran, Russia, the Black Sea region, China and Europe via Turkey, Eurasia stands at the crossroads of old and emerging transportation corridors. Recently, with China's increasing interests in connectivity projects, such as the New Silk Road and the One Belt One Road (OBOR) initiative, the importance of Eurasia has again been drawing the attention of many actors that particularly focus on the fields of energy transportation and the establishment of trade routes.

Importance of the Baku-Tiflis-Kars railway

In this context, the Baku-Tbilisi-Kars (BTK) railway emerges as a critical project in this part of the world and situates Turkey at the westernmost point of the East-West corridor. In addition, such transportation projects will give Turkey the opportunity to strengthen its relations with countries in Eurasia in the economic and political spheres. Turkey has already declared its intention to become a hub in the Middle Corridor. Thus, Turkey appears to be the most viable country to assume this role, as it has borders with Georgia, the Black Sea, the Middle East, the Mediterranean Sea and Europe.

The need to establish multi-layered policies and develop multimodal transportation plans emerged as the trade volume between China and the European Union has increased. However, today it takes up to 60 days to transport goods via maritime corridors. To offer a more efficient approach, China identified three land routes and a maritime route within the framework of the OBOR initiative. One of the three land routes, i.e. the Middle Corridor, passes through Kazakhstan, Azerbaijan, Georgia and Turkey. Although various options such as highway, airway, land and maritime routes are on the table for China and OBOR participant countries within the framework of regional integration, railway transportation proves more time-efficient, environment-friendly and secure compared to others. Hence, projects in the context of the "Iron Silk Road" are expected to gain more momentum in mid-2017. In fact, 87 percent of its construction was complete as of July 2016, and the BTK railway is expected to be operational soon. Once finished, the BTK railway will provide an uninterrupted corridor from China to London. In this context, complimentary links, such as Marmaray and the Eurasia Tunnel, have been built by Turkey with the support of European, Korean and Turkish investment banks. In the next years, China-Europe (United Kingdom too) transportation will take approximately 15 days with completion of the Middle Corridor.

Expectations from the railway project

The BTK railway project was initiated in 2005 and construction began in 2007. Contractors for the Turkish portion, from Akhalkalaki to Kars, are Özgün Yapı and Çelikler Consortium. Project owners are Azerbaijan Railways and Turkish State Railways. The railway is 826 km long, and 76 km of it will pass through Turkey. From Baku port, the route will reach Aktau port in Kazakhstan over the Caspian Sea and continue until it reaches China. Additionally, Turkmenbashi port in Turkmenistan is included in future planning. The BTK is expected to carry 1 million passengers and 6 million tons of freight annually in the middle term. In the long term (as of 2034 according to projections), the BTK railway is expected to carry 3 million passengers and 17 million tons of cargo. Thus, easier, less expensive transportation options will strengthen people-to-people contacts, contribute to developments to increase the welfare of the region with transit fees and tourism, promote mobility of goods and people and integrate the region with the international community and markets. By doing so, sustainable and permanent ties will be established in Eurasia.

Moreover, the BTK has the potential to expand considering its geographic position. With additional links, it can connect to the North-South Transport Corridor and Southern Corridor via Iran. The BTK will be the heart of the new links for more than one country, Turkey, as it is the only connection between the Caspian Sea and the Black Sea. This line is vitally important, considering the lack of feasible land connections between Central Asia and South Caucasus, and Europe via Turkey.

In addition, the BTK railway is at the heart of the above-mentioned Middle Corridor and expected to be completed in early 2017. The BTK railway will be one of the main connectors in transportation projects, such as the European Union-led Transport Corridor Europe-Caucasus-Asia (TRACECA) and the OBOR Middle Corridor, and it will promote the role of Turkey as well as Azerbaijan, Georgia and Kazakhstan. Uninterrupted lines will stretch from China to Europe and promote positive outcomes in relations based on cooperation.

The BTK is not only a regional project; it will serve the interests of many other countries as well. Hence, it is the focus of many actors and scholars working on Eurasia. For instance, the Washington-based Center for Strategic and International Studies draws attention to 17 projects to watch in 2017, and the BTK is listed among them in the "Reconnecting Asia" section. From that perspective, such transportation projects will encourage not only countries along the BTK railway but also countries in Eurasia to increase their trade and diversify areas of cooperation with each other and with countries in Europe. Since both Azerbaijan and Kazakhstan are energy export countries, diversification of trade items will support their economies and minimize the level of vulnerability of their economies due to the probability of drastic changes in prices for natural gas and oil as experienced today.

However, there are still challenges to overcome such as pursuing work to standardize technicalities in the projects to integrate them, building infrastructure and reaching a consensus on the legal status of the Caspian Sea or Caspian Lake. Also, some scholars argue that since the Middle Corridor includes more countries than other corridors, due to paper work and more borders to pass compared to the Southern and Northern Corridors, it might not be the favorite route. However, work on harmonization of customs and tariffs and measures to enhance smooth operation of the railway continue within the framework of the Kervansaray Project initiated by Turkey in 2009. Also, both political and economic cooperation and collaboration among the countries along the Middle Corridor remains strong. They show their willingness to overcome the obstacles to further integration. Once the above-mentioned problems are solved and finalized successfully, the Middle Corridor will be an efficient option in the long term.

Also, beyond their economic value, comprehensive and inclusive connectivity projects like the BTK will support regional economic and social integration. Suitable to the geographic characteristics of Eurasia – the concept that contains east Asia, central Asia, south Caucasus, Iran, Russia and Europe – the region has the potential to become a connector for the East to West line and Atlantic to Pacific line. For centuries the Silk Road route was the focus. Even today, as it was in the past, any project that contains corridors passing through this region will benefit all actors. This route provided and still provides a good base for win-win trade and for Silk Road-built connections not only among merchants and business people, but also among locals, which will eventually develop cultural interactions as well.