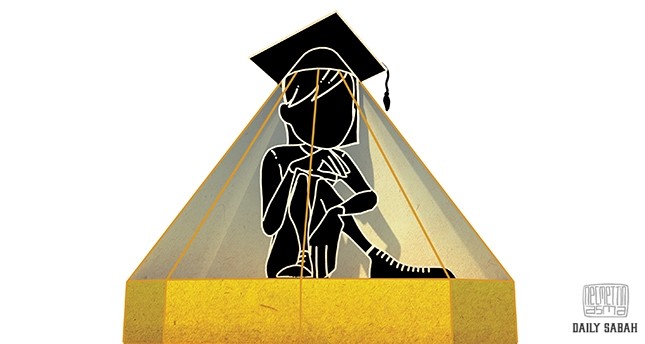 Unless the pressure of the Kemalist indoctrination prevalent in the Turkish education system, which prevents Turkey from renewing its ideological out-of-date curriculum, is eliminated, the chronic problem of reforming minds in the country cannot be solved

The government intends to reform the existing curriculum of the educational system. They introduced a draft version of the new curriculum (for each subject taught in primary, middle and secondary schools) a while ago so that interested parties (educators, pedagogues, teachers et cetera) can analyze it, discuss it, and then contribute to the on-going discussions by sending their comments/analyses to the committee that will address the points raised and finalize the draft version. As someone who studied the relationship between the Turkish educational system and Turkey's Kurdish question, in this article, I would just like to make some humble recommendations for the draft version of the new curriculum.

First and foremost, before diving into the details, the very first thing that caught my attention immediately after National Education Minister İsmet Yılmaz introduced the draft curriculum in a press conference and laid out the timetable for the processes of getting feedback, making the necessary discussions and finalizing the introduced draft was how the time allocated for all of these serious phases was unfortunately very limited. He mentioned that the draft was going to be discussed for just over a month, and then feedback was going to be considered by the appointed committee and the draft was going to be finalized within 10 days.

The dominance of Kemalism in the educational system

Because one of the core themes in my doctoral thesis is the dominant ideology -- which is the national ideology of Kemalism -- is promoted in the curriculum and/or textbooks and its effects on pupils, I naturally looked at how things have changed in the draft. Unsurprisingly, I have noticed that the prevailing ideology that is prioritized over every other education goal and attainment remained pretty much the same. Based on the draft curriculum, although I guess that we will see the use of "the cult of Atatürk" in other textbooks such as the Turkish lesser (which is not the case at the moment), the compulsory "History of the Turkish Revolution and Kemalism" course unit is still there in the new curriculum, and phrases such as "students should be committed to the principles and reforms of Mustafa Kemal Atatürk and to the nationalism of Atatürk"are still in place among the main goals of the educational system. Thus, Kemalism is still the only official ideology dominating goals and achievements in the Turkish educational system. It is obvious that this will remain the same unless we openly talk about the ideological indoctrination and its effects on students, and question it.

The negative impacts of Kemalism on pupils

Considering the negative effects of the cult of Atatürk on the educational system, according to the findings of my doctoral thesis, there appears to be two major consequences for Kurdish and Turkish pupils: These are one, to make Turkish pupils sanctify Atatürk, something that culminates in unquestionable authority, and thus to make them become sincere Kemalists by using this authority, with a strong sense of Turkish nationalism that becomes internalized; and two, to make Kurdish pupils become assimilated into Turkish culture, by making them forget their language and culture, which usually leads to them becoming passive persons who are ashamed of being who they are in the first place.

In response to the excessive use of the cult of Atatürk in Turkish schools, Kurdish pupils tend to defend the PKK's imprisoned leader, Abdullah Öcalan, probably because their families tell them to do so, as reported by some teachers. This causes another significant issue to emerge, which is the creation of another cult of personality within the secular Kurdish nationalist movement. In this case, the national characteristics of the Turkish educational system makes Kurds more nationalists, which is ironic. In this regard, "Apoism" (Apo is the honorific name for Abdullah Öcalan) appears to be just another version of "Kemalism." This thesis suggests that these two ideologies make Turks and Kurds more "fanatical" by developing Turkish and Kurdish nationalist ideas around the cults of Atatürk and Öcalan.

The findings also show that not only Kurdish pupils are being affected by the Kemalist ideology, but Turkish ones, too. The excessive use of the cult of Atatürk in the educational system has had a negative impact on pupils. Given the fact that Atatürk is portrayed as an extraordinary person and a near super-hero in textbooks, the relationship between students and Atatürk becomes even more complicated and thus more controversial than is usually admitted. This relationship actually has a metaphysical and mystical dimension, making Atatürk a spiritual or mystical character and even a divine figure in students' minds, so to speak.

Apart from the cult of Atatürk, another issue is that ethno-cultural nationalism is embedded within Kemalist ideology, which is referred to as "Atatürk nationalism." One of the serious issues here is that it promotes "the supremacy of the characteristics of the Turkish nation," which comes from an ethnocentric approach. This surely has very negative effects on non-Turkish students, as it directly excludes and alienates them.

It is known that some history-related course units in the Turkish educational system unfortunately give biased information about historical events. For example, the "History of the Turkish Revolution and Kemalism" textbook is primarily based upon Atatürk's book The Nutuk (The Speech), which constructs a single-sided history narration, because the Nutuk was actually a speech given by Atatürk himself in Parliament in order to justify his actions during the Independence War and his policies during the foundation of the Turkish Republic, making it highly problematic. In this case, the official history narrative appears to results in the construction of history. As a result, unfortunately, the "History of the Turkish Revolution and Kemalism" course unit still reflects the mindset of the single party period in Turkey.

Another issue that emerges from the analysis of the "History of the Turkish Revolution and Kemalism" textbook is that ethnic groups other than Turks are not only excluded, but also negatively portrayed. For instance, the words "Kurds" and "Armenians" are only mentioned once in the "History of the Turkish Revolution and Kemalism"textbook, and even then, it is in the context of "harmful organizations against national unity". It talks about such "harmful organizations"established by both the Kurds and Armenians against the independence and the unity of Turkey after World War I. This appears to be the one of the most serious issues in history-related textbooks because the degree of diversity existing in society and the multicultural structures of the country are not reflected and celebrated in textbooks.

What to do to better the educational system

Firstly, it is obvious that the Turkish educational system needs to adopt a "post-Kemalist paradigm." In the case of a paradigm shift, the new educational philosophy should be developed according to the idea of multiculturalism and anti-racism. This is because in a multicultural educational system, students tend to consider the existence of other ethnic/religious groups as "richness" that should be enjoyed by members of society. In this case, the possibility of any kind of exclusion is also minimized by promoting a culture of diversity and the idea of living together by respecting one another.

Secondly, the cult of Atatürk that is promoted in the existing curriculum should be removed from the new curriculum. Furthermore, as pointed by Şükrü Hanioğlu, a renowned historian, in his recent article published in Turkish daily news

paper Sabah, Atatürk should be "historicized" as a character in history narratives. He should not be portrayed as an extraordinary man anymore, an action which creates a lot of problems for pupils at the moment. Moreover, the"History of the Turkish Revolution and Kemalism" course unit should be removed from the curriculum, and some of its contents should be added to the "History" course unit.

However, the influence of Kemalism should not be taken lightly in this process, which means that it should be accepted that all of these reforms discussed here cannot be done overnight, which is understandable, given that Kemalism is still a strong ideology within Turkish institutions. Having said that, the findings of my thesis strongly suggest that as long as the Kemalist ideology remains the official ideology influencing education, the issues that non-Turkish and even Turkish pupils face in both schools and in their daily lives will remain unsolved. Therefore, I think it is time we addressed these issues.