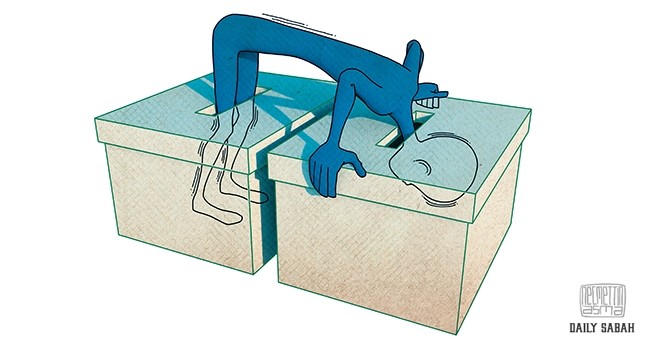 Turkey is an unpredictable country in many ways but when it comes to elections, the electorate seem to be divided into two camps (70 percent vs. 30 percent between the classical right wing and left wing voters) and unless one party makes a huge mistake, they will not swing to the other side

For a social scientist Turkey is heaven thanks to its unpredictability in every sense of the term. Surprising and unexpected events take place every day in different realms of life like the political and economic sphere and the social and cultural aspects of society. Turkish society cannot easily be pigeonholed and thoroughly analyzed. For this reason, many social science theories and concepts could have developed here following the declaration of the Republic in the 1920s. Yet, during the formative years of the Republic, it is easy to understand why the society suffered, considering the trauma of the transition period from being a traditional society to a modern society. This period, roughly from 1923 to 1950, still plays a key role in people's thinking during their political decision-making process.

Generally speaking, Turkish voting behavior, unlike many other contemporary societies, has been shaped in the home, with a considerable amount of influence from parents, or more specifically, as a result of being a patriarchal society. Fathers are important figures whose political ideologies have a great impact on their offspring. The result is some 90 percent of the electorate has a strong attachment to a political party, which allows for little chance of a swing between elections. Again, unlike many other modern societies, political party supporters believe in Turkish exceptionalism in a way that is reversed from the classical Marxist class system.

Over two-thirds of the working class and rural inhabitants support conservative parties, and the remaining part of the electorate, which are mainly middle class urban people, support other parties, who claim to be either leftist or social democrats, like the Republican People's Party (CHP). Historically, the political elites who established the Republic considered themselves the owners of the country who had the "burden of civilizing" the masses without asking their opinions on the changes in their lives. There was no social contract whatsoever between the ruled and the rulers until the multi-party system change that occurred in 1946. So, in any election campaign political parties need to pay sufficient attention to that formation period and perhaps invoke some fear; for the conservatives the fear of marginalization and humiliation for their traditional values, and for the modernist Kemalists the fear of going back to the darkness of the Middle Ages.

The April referendum and voters' behavior

Turkey is facing a referendum in April regarding a constitutional amendment that would change the current system from a parliamentary system to a presidential one. Despite the heated debates in the public arena, the voters do not seem to be bothered with the technicalities of the possible system change as the proposal requires some expertise in terms of legal and political language. Yet it is highly likely that the result will be affirmative, approving the system change, as it is a well-known fact that there is a balance of 70 percent to 30 percent between the classical right wing and left wing voters.

The cooperation between the Justice and Development Party (AK Party) and the Nationalist Movement Party (MHP) is a clear indication of this historical right wing bloc in Turkey. However, there are also some floating voters who would change their votes according to some other decisive factors like an economic slowdown that would endanger their economic status in the near future or issues like security and stability, which could be associated with the relations with the United States, the European Union, and neighboring countries. For some liberal elites, democratic reforms like human rights and more importantly, rule of law, are crucial issues that impact their political choices.

The "no" camp will probably base their campaign on several issues like claims of polarization in society, which is useful in inflicting the fear of intervention with their lifestyles. For these guardians and "owners" of the Republic, their values are beyond criticism since they did their best to modernize the country. This project of modernity was basically founded upon the female body, whose clothes would decide whether the country was a modern or a backward one.

So, until recently, traditionally clothed women were excluded from public spaces, which eventually affected the whole family. However, a certain section of the society that has been occupying the "center" is anxious about losing their privileges against the rest of the society whom they had marginalized into the "periphery." In short, this "polarization" issue has been disputed by the two sides from their own perspectives as both of them would accuse the other, but the "laique" section has had the means to be heard more. After the main argument of polarization and interference with their lifestyles, the opposition would use the arguments of authoritarianism, totalitarianism, and dictatorship, which could easily backfire as the early phase of the Republic could be characterized as a one-man and one-party regime.

Furthermore, this argument has already lost its glow because of its overuse since the Gezi Park protests. The accusations of being a dictator were preparations for last year's coup attempt. So, the claim that if this amendment would pass in the referendum, the current president, Recep Tayyip Erdoğan, will be a dictator, has ceased to be persuasive like the claims of interference with the laique and secular life styles, which have been baseless over the 15-year AK Party rule. If the opposition decides to use an anti-Erdoğan argument for the referendum they would be admitting defeat right from the start, since they would be confessing that they do not have a reliable candidate for the presidency who could win elections in the future.

What not to do - tips for the 'yes' campaign

It seems that the "yes" camp has all the advantages since they have a lot of arguments to be used in their campaign. However, relying too much on past suffering might not be 100 percent useful in this case as more and more younger generations tend to develop their own political ideologies independent of their parents as a result of the individualization of society in the modern day. The headscarf issue, the recitation of the azan (call to prayer) in Turkish or the Arabic language, and the economic and political instability before the AK Party came to power; all are overused, like the threats of interference or transition to a dictatorship. Similarly, the achievements of the AK Party over the past 15 years in different realms like democratization, health, transportation, and other investments should be used with caution.

Turkey is an unpredictable country in many ways but when it comes to elections, the electorate seem to be divided into two camps (70 percent vs. 30 percent) and unless one party make a huge mistakes, they would not swing to the other side. So, the elections, the election campaigns, the referenda and their contents are not very important unless the opposition makes a huge mistake by changing their attitude toward the simple people of the population and disowning their past wrongdoings and promising the electorate a brighter future, the results will not be different in the upcoming elections in this century.

* Professor of anthropology in the Department of Radio, Television and Cinema at Marmara University
Last Update: Mar 13, 2017 6:16 pm
RELATED TOPICS