Saturday was a dark day in the name of European diplomacy 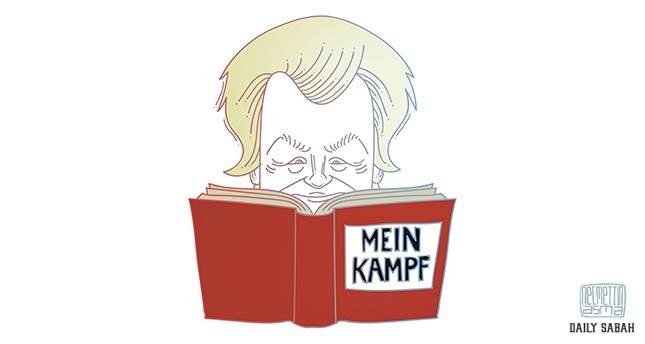 Holland is in the spotlight for its unacceptable behavior toward two of Turkey's ministers who were trying to attend their pre-planned meetings in the Netherlands.

First, Foreign Minister Mevlüt Çavuşoğlu was prevented from landing in the Netherlands without any legal explanation. The following day, Family and Social Policies Minister Fatma Betül Sayan Kaya drove from Germany for pre-planned meetings to discuss the details of Turkey's upcoming referendum with the Turkish citizens living there. She was halted, then barred from entering the Turkish Consulate premises with no access to the Turkish consul general as she was later held at a police station before being expelled to Germany.

Meanwhile, crowds of people gathered to support the rights of the Turkish Consulate and defend the dignity of the upheld Turkish minister. The peaceful protesters were attacked by police, who visibly resorted to brutal violence, clubbing, horse stampeding, water cannons and dog attacks to disperse the crowds. The racism and hostility exhibited toward Turkish supporters and diplomats was beyond anything seen in the history of diplomacy and policy in any country.

Many European countries have long suffered from a rise in extreme right-wing, racist, fascist inclinations against people of color, immigrants and Muslims in Europe. This tragic incident has proven that these past inclinations have now become a present reality for the Netherlands. The Netherlands will hold its general elections on Wednesday as a far-right political party, unsurprisingly, seems to be taking the lead already. The founder and leader of the right-wing Dutch political party, Geert Wilders, had already openly stated his distaste for Muslims and Turks. The rise of Islamophobia seems to be inevitable as a bleak future awaits the existing Muslim population in the Netherlands.

Many terrorist groups, such as the Gülenist Terror Group (FETÖ) and the PKK, that are illegal and have been outlawed in Turkey, are free to move around in Europe under the false premises of respect for human rights. Yet, high-level diplomats and two ministers of the Republic of Turkey have been disrespectfully and disgracefully mistreated like criminals. The existing paradox is truly dumbfounding.

April 16 is an important date for Turkey as there will be a referendum to vote for or against the long-awaited transformation of the bureaucratic system from a parliamentary system to a presidential system. Every citizen has the right to be enlightened about their legal rights to vote for or against a system that will ensure a better future for their country. More than half a million Turks with dual citizenship work and reside in the Netherlands. The Netherlands has publicly declared support for Turkish nationals to vote against the changes considered in Turkey's referendum.

Why would the Netherlands want a say in Turkey's internal policies when Turkey has no interest in the Netherlands' internal affairs? Previous hopes for a future built on respect supported by international law have been lost with this scandalous event.

Hence, how will the European Union and Council of Europe react against all the violations of human rights, freedom of speech, freedom of movement, democracy, diplomacy, international law, freedom of press that the Netherlands has committed against Turkish citizens and diplomats and the two ministers of Turkey in a "civilized" European country?