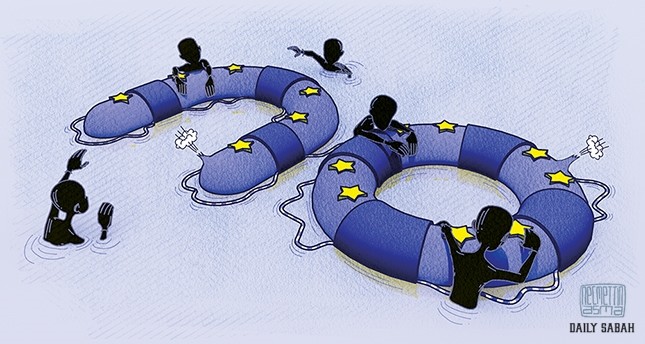 European xenophobia, which has emerged in every period against different groups, this time sees Turks and Muslims as its main enemies

On Saturday night, Family and Social Policies Minister Fatma Betül Sayan Kaya was prevented from going into the Turkish Consulate in the Netherlands' city of Rotterdam, leading to a diplomatic crisis between the two governments. Before this, Foreign Minister Mevlüt Cavuşoğlu had been prevented from delivering a speech in the same country and in Germany. These events, in fact, were the direct results of increasing far-right sentiments against foreigners in Europe, starting with the Brexit vote. However, this is not the first time Europe has suffered from such intense far-right thinking, the continent experienced it before WWII, and we called it "fascism,"instead of being part of the "far-right." Calling the same beliefs "far-right" justifies their xenophobia, and places it in the legitimate political spectrum, even though history shows us that they have the same characteristics. History does not necessarily repeat itself in the same manner, it usually changes form, and very few take lessons from it.

In poor economic conditions, the first group of people to take the blame is usually immigrants. They come in times of peace and contribute to the economy through either capital or labor. However, after a while, if anything goes wrong, immigrants are the first ones who are accused of taking natives' jobs or exploiting the country's economic resources. The focus is shifted to immigrants, and this creates xenophobia, which leads to the rise of fascism. Politicians see it as an opportunity and use racist rhetoric as an instrument to win elections by popular vote.

Karl Lueger, long before the world wars, was one of the first politicians who used anti-Semitic rhetoric to win the popular vote in municipal elections. Here, Jews were to blame for the economic stagnation. In fact, they were the ones who brought about Austrian trade in the first place, but worsening economic conditions made them guilty in the eyes of the public. Lueger used racism as a political tool, and it helped him win the election. However, racism did not disappear once it served its purpose as an instrument. Instead, racism became an integrated notion of the new fascist national ideology. Decades after, success in the use of anti-Semitism for elections was seen and copied by Adolf Hitler, and we all know at what cost the utilization of racism came about in that instance.

Today, more than a half-century after the "end" of the dominance of fascism in Europe, this racism is about to be reborn in a new form, but with the same origin: hostility against immigrants. As in the case of Jews prior to the rise of the fascism in Europe, Turks had been welcomed as an additional labor supply source in Germany and other countries by agreements with the Turkish government at a time when Europe needed to rebuild in the period of rehabilitation after World War II. Over the years of economic growth and liberal dominance in Europe, Turks or other immigrant groups did not face a serious collective fascist threat. However, in recent years, combined factors from new waves of immigrants to the recent financial crisis opened the way for politicians to use nationalist rhetoric again. Nationalist rhetoric needs a demon, and the Turks were the perfect candidate, enhanced by the image of "the Islamist authoritarian leader of Turkey, Recep Tayyip Erdoğan." Furthermore, in the eyes of the far-right, President Erdoğan was representing the resurgence of the Ottomans, who were an existential enemy for European countries for centuries. These reasons made the Turks the ideal "demon" for their increasingly nationalist discourse.

First, the "Turkish threat" was used by the "leave" campaigners in the Brexit vote: If Britain remained in the European Union, Turks would be all over the U.K. due to visa-free travel, they said. President Erdoğan was characterized as the new evil of Europe by the "leave" supporters. U.S. President Donald Trump also used the fear of immigrants to win an election, and he succeeded. Now, European politicians see the use of fear of immigrants as a good opportunity and they have also started to use the same discourse, from Marine Le Pen in France to Geert Wilders in the Netherlands. Here is one of his most recent tweets, regarding a deported Turkish minister: "Go away and never come back [Turkish Family and Social Policies Minister] @drbetulsayan and take all your Turkish fans from The Netherlands with you please. #byebye."

Actually, this is not his first attack on Turkey. One year ago, he released a video, in which he said that Turkey will never be part of the EU as they have a Muslim majority population. In the same video, he also shows explicitly how they demonize Turks with the image of Erdoğan: "Turkey voted for Erdoğan, a dangerous Islamist who raises the flag of Islam. We do not want more, but less Islam. So Turkey, stay away from us."

Now it is time for the Netherlands to vote this Wednesday. Recent polls show the increasing probability of victory for the far-right Party for Freedom (PVV), led by Geert Wilders. The current conservative-liberal government of the People's Party for Freedom and Democracy (VVD) wanted to reach voters from the far-right just before the elections by using the Turkophobia card. That is why the Turkish minister was prevented from entering the consulate and then deported.

As a conclusion, after seeing the far-right reflexes of the European leaders against Turks, other immigrant groups, and Islam; it is safe to say that praising overrated European values is not meaningful anymore. The spell of the praised freedom of speech, democracy and human rights has been broken for the sake of getting popular votes and we have already seen how these values can be re-defined in a way that excludes immigrants when necessary. Now, while anti-Semitism is being replaced by Turkophobia and Islamophobia, it is unclear if these values will ultimately fail.