Terror units in Syria: US militarism gets more reckless 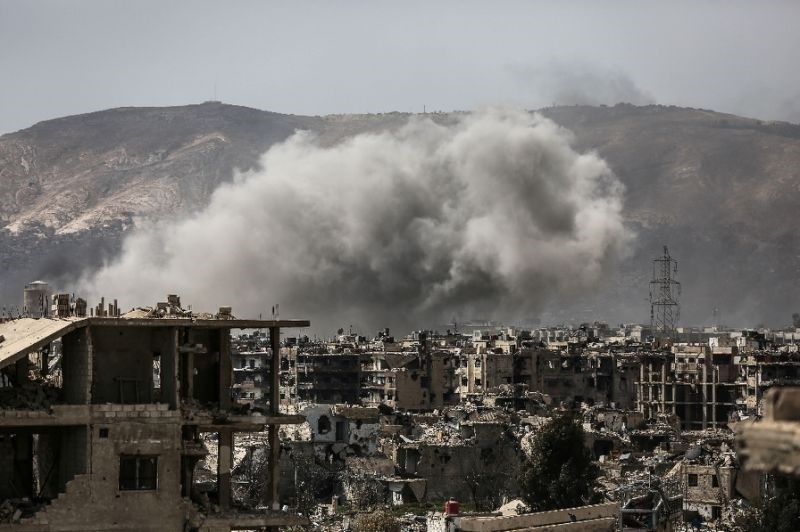 Smoke billowing after a reported air strike in the moderate opposition-held parts of the Jobar district, on the eastern outskirts of the Syrian capital Damascus, March 19.
by Shakir Husain
Mar 21, 2017 12:00 am

The U.S. somehow has its own reasons for launching needless wars - taking control of Arab, Asian and African resources, increasing arms sales by prolonging conflicts

The Pentagon has once again showed its reckless adventurism in Syria with its active support for creating terrorist enclaves near Turkey.

The U.S. somehow believes it has incontestable rights to go anywhere and sponsor conflicts in the Middle East.

Its war fanaticism has produced unprecedented misery and mayhem for tens of millions of people in many countries, but the U.S.'s appetite for conflicts keeps growing.

The Pentagon has become so irresponsible in its trouble-making that its men openly hobnob with terrorists, create child soldiers and share the pictures on social media. While the U.S. government may consider the PKK a terrorist organization, the PKK's Syrian franchise, the Democratic Union Party (PYD), and its armed wing, the People's Protection Units (YPG), are embraced as allies. The U.S. simply has no business arming and training these terrorists, no matter what camouflage they use.

The Pentagon's war fiction encourages them to find new ways of getting involved in more crusades, and terrorism becomes an essential tool to achieve that. Their callous disregard for human lives and cynical use of women and children in armed gangs to serve the American foreign policy objectives must be exposed, regardless of the romantic images of conflicts they try to portray through the CENTCOM or similar channels.

Any reasonable person would advise the U.S. and its military men to not pursue a confrontational path with Turkey. But those who launch wars of aggression on lies and flimsy excuses can't be expected to be rational in their actions.

Despite the U.S. and some of its European sidekicks working against Turkish interests, Turkey has maintained restraint in dealing with their hostile behavior. The fact that the U.S. is still able to operate from İncirlik Air Base is a big example of Turkey's restraint. Must the U.S. take Turkey's restraint for granted?

The U.S. cannot overlook Turkey's security concerns. There is greater national resoluteness in the country to deal with all threats to national security following last year's invasion in the form of a coup. The U.S. harbors the kingpins of this coup.

When the Gülenist Terror Group (FETÖ) and its foreign mafia sponsors launched their most treacherous project through the July 15 coup attempt, the nation defended itself with an honor and valor that has no parallel in history. Today Turkey is better prepared to confront any new threat to its stability and those who harbor mischief in their hearts must take note of it. Turkish leaders have made it clear time and again that any sponsorship of terrorist groups whether it is the PKK in Iraq or its subsidiaries in Syria would not be countenanced.

The U.S. has its own reasons for launching needless wars - taking control of Arab, Asian and African resources, increasing arms sales by prolonging conflicts, protecting Israeli war crimes, giving vent to their crusade fantasies or seeking sadistic satisfaction when populations are repressed by the Mubaraks and Ben Alis.

While the Pentagon's actions may be dictated by any one or all of the above reasons, it would be worthwhile for them to understand that Turkish national interests are non-negotiable.

If the Americans want to be taken seriously as an "ally" they should start believing in at least some of the pompous claims they make about theirs being a responsible democracy that adheres to humanitarian values and rule of law.

While they talk about having humanitarian concerns, they actually indulge in doing dishonest deals against Syrians who are being massacred and tortured in the most horrifying ways by the Assad regime and its backers. Instead of using their influence to broker peace, the U.S. fans the fires of the conflict through its duplicitous and dangerous actions. Their reluctance to help Syrian people is only matched by their eagerness to rob Syria in whatever way possible.

The U.S. military's Central Command had no shame in recently parading Kurdish women and children in combat fatigues. The issue here is not of teaching the Pentagon moral lessons but to highlight the U.S. recklessness that can further exacerbate conflicts in the region.

For people in the region, the U.S. role in various wars and its partnership with Israel in the daily crimes against Palestinians are glaring examples of its hostility towards Muslims. The neocon Iraq war project alone has cost Americans hundreds of billions of dollars, wrecked America's image and made the world a more dangerous place.

The list of U.S. follies can be endless. The Pentagon should focus on correcting its past mistakes rather than seeking new troubles.