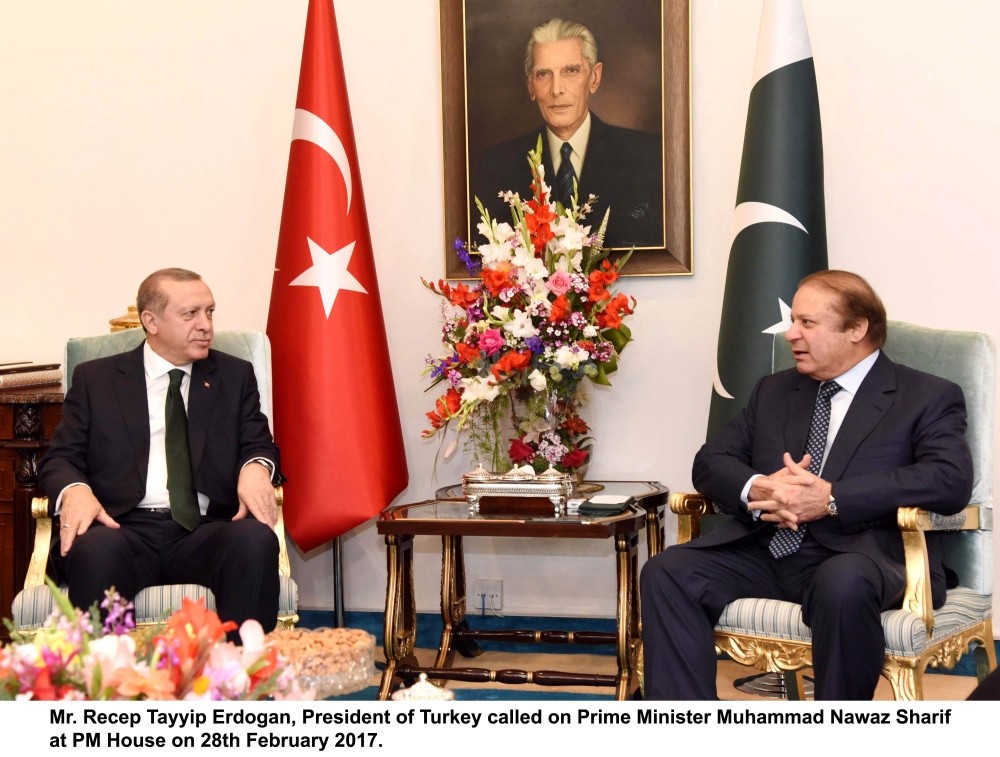 There are no two countries today like Turkey and Pakistan that have such mutual trust and understanding between one another, as well as the natural convergence of views and perspectives on a range of regional and international issues

Pakistan Day (March 23) this year has a special significance, as we celebrate both the 70th year of diplomatic relations as well as a continuously growing strategic relationship between Pakistan and Turkey. Having a glorious past, these abiding fraternal ties have an equally promising future. Indeed, the Pakistan-Turkey partnership is destined to remain a vital factor in the peace, stability and progress of our two peoples in an increasingly turbulent world.

For perspective, "Pakistan Day" marks the commemoration of the historic turning point in the epic struggle of the Muslims of South Asia for a separate homeland. On March 23, 1940, the Muslims of the sub-continent took the momentous decision to fully realize their national aspirations. The famous Resolution demanding the creation of a separate state for Muslims was adopted at the annual session of the All-India Muslim League at Minto Park, Lahore.

The homeland envisioned in the 1940 Resolution became a reality within a span of seven years. Under the dynamic leadership of Quaid-e-Azam Mohammad Ali Jinnah, Pakistan emerged on the world map as an independent and sovereign state on Aug. 14, 1947. The people of Pakistan, whether in the country or abroad, celebrate March 23 as Pakistan Day every year.

Pakistan Day is an occasion for all Pakistanis to pay tribute to the sagacity and foresight of the father of the nation, Mohammad Ali Jinnah, and to express gratitude to those among our forefathers who made the ultimate sacrifice so that succeeding generations could live in dignity and freedom. It is also an occasion to reaffirm our commitment to the lofty ideals for which Pakistan was established. The crux of the democratic struggle waged by our founding fathers was to secure a place where the Muslims of South Asia could develop to the fullest their spiritual, cultural, economic, social and political life in accordance with their faith, tradition and values. A place where they could realize their full potential - a society based on justice and equality, democracy and constitutionalism, the rule of law and economic development.

The newly founded Pakistan had to contend with formidable challenges in its formative phase, including the lack of an industrial base, insufficient civil and military structures and virtually no regular financial resources. These challenges were exacerbated by a hostile environment in the neighborhood. Yet, the firm resolve of Pakistan's leadership as well as the characteristic resilience of its people, made sure that these challenges were successfully overcome and that the country continued to march on the path of progress and prosperity.

Today, Pakistan reflects a remarkable transformation from the modest beginnings of its early days. From democracy to economic development to national security, the nation has made impressive strides. With an emerging economy, an expanding agricultural and manufacturing base and growing national income, modern-day Pakistan tells a far different story. An empowered parliament, a strong pluralist tradition, deepening democratic culture, dynamic civil society, independent judiciary and a vibrant media characterize today's reality, making the people of Pakistan justly proud.

Externally, Prime Minister Nawaz Sharif's primary emphasis has been on the creation of a "peaceful neighborhood" so that the core national objective of economic development could be robustly advanced. "Peace for Development" is the cardinal principle of this vision and the driving force behind his initiatives for qualitatively different ties with its neighbors. Pakistan's strategic location at the crossroads of South Asia, Central Asia and West Asia, posits it as a natural hub and land bridge for the flow of commerce and energy across regions. This is the essence of the transformational project, commonly known as the China-Pakistan Economic Corridor (CPEC), which could change the shape of the region in terms of socio-economic development. The thematic focus of the 13th Economic Cooperation Organization (ECO) Summit, hosted by Pakistan in Islamabad on March 1, 2017, was also the same, viz. Connectivity for Regional Prosperity. MUTUAL TRUST BETWEEN THE TWO PEOPLESIt is gratifying that as part of Pakistan's external engagement, the strategic relationship with Turkey has further deepened during the past year. The regular visits of the highest political, parliamentary and armed forces leadership from both sides were the hallmark of this process. The scope and depth of mutual collaboration continued to expand.

While we are celebrating the 70th year of Pakistan-Turkey diplomatic relations in 2017, the fraternal ties between the two peoples go back several centuries. The shared cultural, religious, spiritual and linguistic heritage transcends the boundaries of time and geography. A distinct sense of overwhelming affinity is felt at all levels in the two countries and resonates powerfully in the common consciousness of the two peoples.

In a glorious tradition, the people of Turkey and Pakistan have always been by each other's side at seminal events in their shared history. The memory of the Muslims of the sub-continent in Pakistan, leaving their homes and donating their belongings for the defense of Turkish lands and people during the War of Independence, remains fresh to this day in the minds of our Turkish brethren. Turkey's support for our own liberation struggle is remembered with gratitude in Pakistan.

Noted Turkish diplomat and historian Bilal N. Şimşir has pointed out that while responding to the condolence message from the "Muslims of Pakistan at Cambridge University" on the demise of war veteran Mustafa Kemal Ataturk in 1938, the Turkish Ambassador in London, Ali Fethi Okyar, thanked the "Muslims of Pakistan." According to Bilal Şimşir, this could be said to have been the first diplomatic mission to recognize the existence of Pakistan some nine years before its very birth. As he rightly notes, this "unique distinction earned by the Turkish Embassy was symptomatic of the nature of the relations that were going to exist between the brotherly nations of Turkey and Pakistan."

PAKISTAN'S STANCE ON THE JULY 15 COUP ATTEMPTPakistan condemned in the strongest terms the heinous coup attempt in Turkey on July 15, 2016. Prime Minister Nawaz Sharif was one of the first world leaders to call President Recep Tayyip Erdoğan to convey Pakistan's unequivocal support and solidarity for the people, leadership and elected government of Turkey. Prime Minister Sharif also visited the Turkish Parliament to pay homage to those martyred in the defense of Turkish democracy.

This sentiment was expressed across-the-board in Pakistan. Both Houses of Pakistan's Parliament passed unanimous resolutions expressing support for Turkey against the coup attempt. A Parliamentary Solidarity Delegation representing the entire political spectrum in Pakistan visited Turkey. Demonstrations and rallies were held in various cities of Pakistan in support of Turkey's elected government and democracy.

Pakistan and Turkey are facing the scourge of terrorism. Both nations remain determined to root out this menace and will continue to work together in this endeavor.

The leadership on both sides shares the common vision to transform these uniquely cordial ties into a robust economic partnership – essential to utilizing the vast untapped trade and economic potential.

There has been a significant increase in infrastructure and investment projects from Turkey in recent years. Turkish investments in Pakistan have reached the $1 billion mark. Turkish companies are undertaking a number of projects, including Metro Bus, solid waste management, infrastructure development, renewable energy and home appliances.

The process of the finalization of the comprehensive Free Trade Agreement (FTA) is in the final stages and, once concluded, the FTA would give a strong boost to bilateral trade, commercial and investment ties.

Both sides have further strengthened bilateral defense collaboration under the auspices of the High Level Military Dialogue Group (HLMDG) and are now working on a comprehensive, long-term and forward-looking Framework for Defense Cooperation. Meanwhile, defense industry collaboration has acquired a special salience with a broad array of joint projects.

On the political side, the two countries extend consistent and unequivocal support to each other on their respective national causes such as Kashmir and Cyprus and coordinate closely at international fora. Both countries have expressed a determination to work together on initiatives against the rising tide of Islamophobia, religious discrimination and stereotyping against Muslims across the globe.

Bilateral cultural cooperation and people-to-people exchanges continue to grow at a steady pace.

Pakistan and Turkey reaffirmed the strategic dimension of bilateral relations during the recent visit of Prime Minister Nawaz Sharif to co-chair the 5th Session of the Pakistan-Turkey Strategic Cooperation Council (HLSCC) with Prime Minister Binali Yildrim in Ankara on Feb. 23. Established in 2009, the HLSCC has played an instrumental role in providing strategic direction to the development of the bilateral relationship. By now, 60 Agreements/MoUs have been signed within this framework.

At the conclusion of the HLSCC session, nine agreements/MOUs were concluded for enhanced cooperation in diverse fields. The two prime ministers signed the Joint Declaration on Turkey-Pakistan Strategic Relationship for Peace and Prosperity that, inter alia, condemned in the strongest possible terms the recent terrorist attacks in Pakistan and Turkey, expressed firm resolve to fight the common threats faced by both countries, reaffirmed mutual support on issues of core national interest and agreed to intensify collaboration in diverse fields.

In the ensuing months, a range of events will be held in the two countries to commemorate the seven decades of diplomatic relations. This represents an invaluable opportunity to not only further fortify our indissoluble bonds but also transmit the tradition of unmatched fraternity and solidarity between the two nations to future generations. I have no doubt that this indispensable partnership will continue to grow from strength to strength as the time passes.

Long live the brotherhood between Pakistan and Turkey!