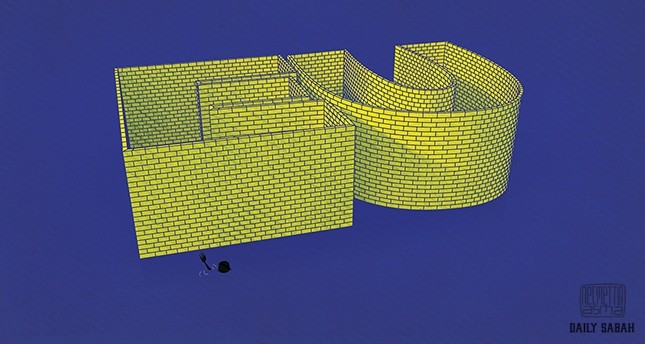 If the EU fails in passing the difficult test of patience and ability to act promptly in the migrant policy, the current leaders will have to say goodbye to their posts

Although the reverberations of last year's migrant crisis are noticeable even today, a brief look at the print media or news servers gives the impression that the situation is returning back to normal. Yes, considering the total figures, the influx of migrants has significantly dropped in comparison with last year.

The credit for it lies with the agreement made between the EU and Turkey on March 18 last year. The agreement is not fully functional in some points. However, thanks to this deal, the number of migrants on the main route has indeed decreased to a minimum.

And what is more, this was a significant drop. While in February this year 57,066 refugees arrived in Greece, since April the monthly statistics relating to new refugees have not exceeded 4,000. This means that the monthly number of new illegal migrants has decreased by more than 90 percent. Therefore, the agreement with Turkey can be considered a great success for EU diplomacy and also a sound argument against those claiming that the EU failed to act on the migrant crisis.

However, a lot of problems persist and it would be a fatal mistake to underestimate their seriousness. It will be extremely important to persuade Turkey to continue guarding the border. Moreover, the present situation in the Mediterranean is far from ideal. Why? Blocking the Greek route has only solved part of the problem.

We are forgetting that apart from Greece, Italy has been affected by the migrant crisis. But there is one difference: Italy is still failing to stop the migrant influx, which means that the country has been struggling with an increased number of migrants up to the present day, mainly migrants from Africa. The confused and unstable political situation especially in Libya is a fertile ground for human smuggling. As a result, illegal migrants are still coming across the sea in high numbers. The migrant influx to Italy is thus not decreasing; indeed the opposite is the case. On Oct. 27, 2016, 313 new migrants were recorded, which is the highest number since the beginning of the migrant crisis.

Another problem is that the vast majority of those people are not refugees running away from war and injustice, but economic migrants.

Will Europe be able to return illegal migrants?Obviously, the first remedial measure is to prevent illegal migration and its causes. The EU has already taken certain steps. In order to combat human smuggling, the European coastguard was established and at the end of October the EU began to assist Libya in training its coastguard. These are two EU initiatives that may help tackle the causes.

However, the main question we should ask ourselves should be why so many people are willing to undergo such a risky and dangerous journey to Europe even if they know that they might drown when trying to sail across the Mediterranean Sea. The natural explanation can be that people from poor African countries are attracted by Europe's higher living standards. People are simply looking for greener pastures, and unfortunately, as I could see myself in refugee camps in Sicily, many of them have very unrealistic ideas about life in Europe. This is all true, but it is certain that such an explanation cannot be considered complete.

There is an additional problem I would like to address here: European countries are consequently failing to return refused asylum seekers. This applies to the EU as a whole and not solely the member states at the outer border of the EU. Within the migrants' main countries of origin, it has become known that many illegal migrants have succeeded in staying in the EU and this has served as a motivator for migrants from "safe countries," whose motivation is solely of an economic nature. Vice versa, as soon as it becomes known that illegal attempts to cross the border will not be tolerated and refugees without asylum status are returned without exception, the number of illegal migrants will drop to a minimum, as the risk and price of the journey will not be worth it.

In recent years, the number of returned migrants has been roughly around 40 percent, which, however, does not refer to the total number of illegal migrants, but only to those who have been ordered to return. The actual number of people who are staying on the EU territory illegally and do not have the right to asylum will be much higher.

Indeed, the EU as a whole was not very successful in returning foreigners who either reached the EU territory illegally or whose asylum application was refused. However, this problem only attracted little attention as illegal migration remained within tolerable limits. But everything has changed with the present crisis. It has become clear that we cannot bury our heads in the sand and that we need to take action.

An effective return policy is one of the fundamental challenges of Europe today. The document titled "Towards an Effective Return Policy" is a good reminder that returning people with no right to asylum is the most effective way to prevent and reduce illegal immigration. Returning people has a deterrent effect and therefore it is absolutely crucial for a well-functioning migration and asylum system.

However, the implementation of the return policy is not that simple. Returning refused migrants is a necessary solution, but far from being sufficient for any significant migrant crisis. As we will see in the following paragraphs, under the present circumstances it is practically impossible to implement an approach based solely on repression for it is insufficient for solving the problem of mass migration.

It is the approach of individual third countries to European states that appears to be the stumbling block. Third countries are not willing to take returned people back. Therefore, the only logical solution is to lead intensive negotiations with African countries. Negotiations with some countries have already begun. Nevertheless, this is a long term issue and results cannot be expected immediately as some people foolishly expect.

Spain can serve as a great source of inspiration since it faced a massive influx of several tens of thousands of people to the Canary Islands between 2006 -2008. In fact, in this case Spain experienced a "little migration crisis." In order to tackle the problem successfully, the country adopted the following measures: They immediately began to return illegal migrants. At the same time, they negotiated agreements on returning migrants with relevant African countries and started to support the development of those countries. If Spain managed to tackle their "little migrant crisis," then it is definitely possible to tackle the "big" migrant crisis within the whole EU in a similar way.

Is there a solution on the horizon?

The good news is that this realistic approach to solving the problem is gaining wide-spread support. The overall change of the policy is perfectly summarized by a headline in a Reuters article on the Brussels summit titled, "No more Mr. Nice Guy: EU gets tough on African migrants." Donald Tusk, president of the European Council has already expressed his opinion, saying that once the migrant crises has been defused, it is necessary to focus on the central part (i.e. first of all Italy), where things are not taking a turn for the better, at least as far as the migrant crisis is concerned.

The July proposal of the European Commission takes into account the "Spanish" method and the "carrot and stick" approach. Naturally, the whole issue was also discussed at the above-mentioned October EU summit in Brussels. The proposal is to provide aid to third countries on the condition that those countries will take back returned migrants. In other words, those third countries that take back migrants and guard their borders deserve generous financial support. And countries failing to do so will lose this support. First of all, the EU will particularly focus on five countries that report the highest numbers of migrants. Those countries include Ethiopia, Niger, Nigeria, Senegal, and Mali.

Now it is time to turn words into deeds. Europe is undeniably taking a step in the right direction and I believe that the planned measures to limit the number of migrants will win the support of the EU as well as African countries and will be implemented. If the European Union does not succeed in passing this difficult test of patience and ability to act promptly, the current leaders will have to say goodbye to their posts. Over the recent months, voters in many EU countries have made it clear that European leaders must turn their words into deeds.